It's Gonna Get Cold 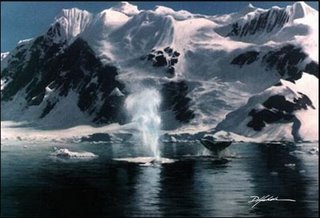 Just when the Leftists thought it was safe to sit back and relax, here comes more facts to upset the Global Warming apple cart. It would seem that far from being a settled fact, Global Warming is ever more firmly entrenched in the Land of Make Believe.

Arctic waters heating up? It ain't from the Air temperature, but from beneath the waves. Anyone who has gone through the winters in the northern climes, or in Canada, knows just how cold the winters are. And the winters grow colder each year. You can't have colder winters when the globe is warming up. In fact, the summers have been cooling at least since 1998, which is the last "record high temperature" summer. Not last summer, as Al Gore tries to convince us.

As Phil Brennan puts it: "The answer is quite simple: Mother Earth is belching up red hot magma through the ocean floor all across the globe. It may come as a surprise to you, but two-thirds of all volcanic activity takes place under the world's seas, and currently that activity is heating the oceans to the point where they are sending huge amounts of moisture up into the atmosphere, where it comes down as heavy rain in the spring, summer and fall, and snow in the winter."

And the word around the globe is the same: glaciers are growing, inching toward the seas, getting thicker. Not the opposite, which is the disinformation the Global Warming Alarmists want you to think.

What does that mean, in terms we can all understand? It means that Global Warming is a myth. If anything, we are beginning our descent into an Ice Age. And there is not one thing we can do to stop it. We may be able to mitigate the damage somewhat, with smart actions now, but we are not going to be able to change what the Earth decides to do.

Oh, we won't be seeing Ice Sheets building up in Wisconsin, or glaciers inching through the Manhattan streets. That's in the distant future. As many of us have been saying for at least 20 years, climate is something that moves over vast areas of time, not just space.

So don't worry about the alarmists and their latest idiotic prattlings about warming trends. They're wrong. And they are nearly uniformly made by people who have a vested interest in destroying the Western economies. That's all they care about. Kyoto proves that. They sure as hell don't care about you and yours. So, read the reports by the geologists and oceanographers. Think about what it all means.

And maybe buy an extra parka or two. Your descendants will thank you!
Cross-posted at The Largo Lip.
Posted by benning at 7:43 PM

"When in trouble, when in doubt, run in circles, scream and shout!"

Can we give the evil conservatives credit for starting the "global warming" trend that has saved us all from the ice age that scientists in the 70's promised would kill us all?

Well, we could, but now we've failed and we're doomed - a few thousand years from now! - to frigid weather! We're just irresponsible, us conservatives!

Jeez cant they make up their minds Benning?..are we too hot or too cold or both?..LOL..great read buddy and thanks tons for the links!..:)

I'm thinking that when I retire to Hawaii in the next decade, it won't be a problem...

Shouldn't be. In the long run I suppose an Ice Age means a lot more beach front for the Hawaiian islands. Buy now! :D

It's hot here in Central Texas, but not as hot as it has been for this time of year for the past several years. It's far hotter in California and in many places on the East Coast than it is here.

Global warming, by royal behind!