This post nailed near the top until August 14, 2006 - the end of the Comments period. Read and get to it, Folks!

The National Park Service was given the solemn task of designing a memorial to commemorate the brave victims of Flight 93 - hijacked on 9/11 by Islamist terrorists. 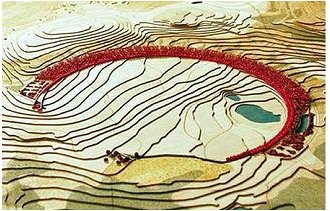 Topographical Mock Up Of Memorial

To honor the passengers and crew who fought the Islamist terrorists, keeping them from flying that jet into yet another American landmark, the design chosen to honor these Americans is built around a foundation of Islamic symbols. The Islamic Crescent Moon is only one of those symbols. Along with the gigantic Crescent, the entire memorial is aligned, geographically to face Mecca. In fact the setup is such that it creates a huge Mosque. 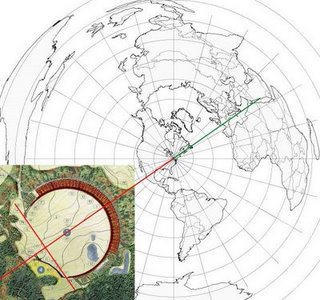 Note the alignment to Mecca.

Alec at "Error Theory" says, "A commentator on my blog (Yoel Natan) pointed out that a crescent that people face into to face Mecca is called a mihrab, and is the central feature around which every mosque is built."

I could copy everything these folks have posted, but it's better if you go, read, get peeved, and then go comment! Always On Watch has info. Mike's America has info. Error Theory has the biggest compilation that I have found.

Folks, some unacountable NPS individuals have seen fit to create a Memorial, ostensibly to honor dead Americans, but in fact to honor the cult that killed them. Even after an outcry, the design changed scarcely at all. This is an outrage! Go! Read! Send your comments to the people involved, and to the ones who can change this before it's too late! We do not need, or want, a memorial to Islamist Terrorists in our country.

And just so you aren't spending the day glum and disconsolate, here's something else I grabbed at Mike's America. Enjoy the image! I did! LOL 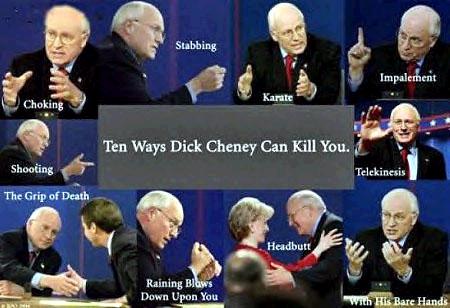 I've been paying attention to the design of this Memorial for the past year now. I can't believe that they will go forward with this crescent design. There's no way that this is a coincidence.

This is the very definition of adding insult to injury!

It makes me so angry I could spit.


I posted the Dick Cheney thing a while back (January or February maybe); it never gets old! Maybe Dick could do an agent cameo on 24? :D

I don't think I buy that they made it a muslim crescent on purpose. But it's just trees, right? If someone has a problem with it (and many do), why not plant the trees in the shape of a star or something?

Paul Murdoch, the architect, is supposed to be very creative. Now, let's see him get creative and eliminate this offensive design.

ac: You'd almost think the NYTimes was in charge! Amazing.

brooke: It keeps making me giggle! That's not a safe image!

YUp out of all the signs n logos on God's green earth...lets use the crescent and rub salt in the bloody wounds of the loved ones who lost their families!..UGH!!!

brooke: Wordsmith at Hammering Sparks from the Anvil passed the Cheney thing along to me. Maybe he found it at your place. He forgot to tell me.

As for the memorial: the "redesign" eliminated the name "Crescent of Embrace" that hitherto described the arc of red maples. They added a few more trees here and there but the basic design in the same.

I find it really difficult to believe that anyone so creative as these designers would be so ignorant to the symbolism of their design.

It would be better to scrap this plan altogether and start over.

P.S. I've got an article submitted to Real Clear Politics:

I appreciate anyone who visits the Real Clear site and votes for my submission:

Whoa! Mike, you got eleven votes already! Nice work! Lemme see if this is what Iread earlier! :D

Okay, I voted for your piece. Yep, I read it at your blog. LOL

That is so cool, mike!

This cracked me up when I saw it on Mike's comments box!

Thanks Benning. Three more votes and I take the lead:

That is outrageous! Sheesh. Talk about betrayal to fallen countrymen and women let alone this entire nation. This is being quietly designed and built? Where is the outrage? America can be dumber than a box of rocks sometimes. This is crazy. I'm going to voice my disgust to my Senators and Reps. Won't do any good probably, but better than being mute about it. This truly pisses me off!

Even if it wasn't done on purpose it needs reconsidered, there's to much weird crap about it.