From Big Hollywood - 9/29/09 - comes this list of the morally-deprived of the Entertainment world who have signed the petition to set poor child-rapist, Roman Polanski, free. After all, who says that fleeing from justice deserves a penalty? And rape? meh! She's in her forties now, and she doesn't want to be put through the sensationalism of another trial.

So why don't we all just drop this, okay?

Right? Polanski is a celebrated artist of the cinema. So we cannot judge him by our puny, unenlightened standards, anyway, now can we?

Got yer hackles up yet?

Susan Estrich, with whom I disagree on every political issue, nailed this to the wall. By now I'm sure you've read her commentary, "Roman the Rapist", but if not, go take a gander. Worth it, trust me. The Washington Post is on the right side, too. As noted in The Corner, they say, 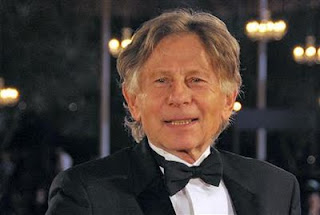 "What matters is not that Mr. Polanski is 76 or that he has a talent for filmmaking or that his own life has been filled with unspeakable horrors or that the case is decades old. It doesn't even matter that his underage victim, now grown up, forgives him. What matters is that this man admitted to having sex with a 13-year-old whose undisputed testimony details how he gave her champagne and Quaaludes, got her naked in a hot tub and wouldn't listen as she — terrified — said no. He was originally charged with sodomy and rape but agreed to plead to a lesser offense. He jumped bail and fled the country out of fear the judge would give him more prison time than the paltry 42 days supposedly promised by prosecutors. He has been living with impunity and in luxury ever since."

Even the readership of the Loony-Tunes Huffington Post have been aghast and appalled at the support for Polanski, and the diminution of the rape to a 'well, he's an Artiste, so it doesn't count,' by the usual suspects.

Fact is, if you think Polanski is getting a raw deal, or should be let go, you're not worthy of notice. I tried to think of words to describe how low these defenders of Roman the Rapist are, but there isn't a word to describe how low these creatures are. They're the stuff you scrape off your shoes onto the curb. These 'people' are missing some important ingredients which make up a true Human being. Their minds are not functioning correctly - obvious, right? - their hearts are tiny and black, their very souls are missing.

How to respond? Ignore them. Oh, I'm not saying forget what they say, and have said. No, I'm saying ignore their very existence.

Most of these 'people' I've never heard of, and I see no reason to look into their personal information. So ... ignore them. Don't buy their books; don't go to their movies; don't buy anything they're involved with - as sponsors, spokespersons, and so on.

Show them the contempt they've so richly earned by leaving them strictly alone. If they can prosper with only the financial support of their fellow believers in 'The Elite are above human decency and norms', more power to them.

I'm not calling for a boycott - it always seems to be something too political - but use your power of 'choice' to choose other products, other books, other movies, other television shows. It ain't that hard, really.

I won't try to update the list of those evil-supporters who signed the ugly petition to demand Polanski's release. But these are the ones I found at Big Hollywood. Do what you will. As for me, I will leave them strictly, and totally, alone.

I have no time for those with Black Hearts and Missing Souls.

Bear in mind, these are only the ones dim enough to sign the petition. Many others are yapping about setting Polanksi free. You know you've heard about them. Remember them!

Most of the signatories appear to be fellow directors (showing some kind of misguided solidarity, I guess) or a bunch of decadent Frenchfolk.

As for Whoopi Goldberg, it's about "par for the course" for her...

You're right, Camo. Goldberg is a waste. As for those others, they've been outside normal humanity for a log time, I think.