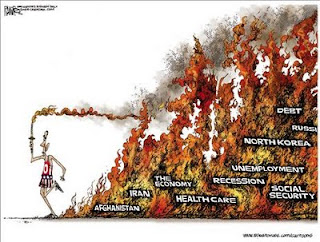 Too, too funny! Too, too true--and so many people believe the number one reason killed it.

Add your own. And thanks to Rich Lowry of NRO for sharing.

8. Who cares if Obama couldn't talk the IOC into Chicago? He'll be able to talk Iran out of nukes.

6. Obviously no president would have been able to accomplish it.

5. We've been quite clear and said all along that we didn't want the Olympics.

3. Clearly not enough wise Latina judges on the committee.

2. Because the IOC is racist. 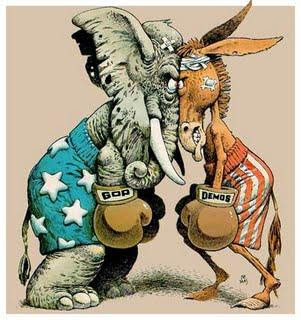 Here's a list that's been making its way across the blogosphere recently. It's been added to, derided, quoted, and so on. Perhaps it is a bit mislabeled. For Liberal substitute 'Leftist', and you will rest easier. I think. This is from SodaHead.com. I first read this at Bookworm Room. I recommend making her blog a daily stop.

What's the Difference Between a Conservative and a Liberal?

Here are some brief rules of thumb:

•If a conservative is a vegetarian, he won't eat meat.
•If a liberal is, they want to ban all meat products for everyone.

•If a conservative sees a foreign threat, he thinks about how to defeat it.
•If a liberal see an enemy he wonders what he can do to appease him.

•If a successful conservative is black or Hispanic, he'll see himself as having succeeded on his own merits.
•Successful liberal minorities still claim "racism" and want government to give them even more.

•If a conservative is down-and-out, he thinks about how to work to better his situation.
•A liberal wants someone else to take care of him.

•If a conservative doesn't like a talk show host, he switches channels.
•If a liberal doesn't like a radio show, he demands that the station be shut down or censored.

•If a conservative is a non-believer, he just doesn't go to church.
•Non-believing liberals demand that everyone cease believing and demands churches be censored.

•If a conservative needs health care, he shops for it, or chooses a job that provides it.
•Liberals demand that everyone else provide him with healthcare for free.

•If a conservative sees a law, he thinks long and hard before suggesting a change.
•If a liberal sees a law he assumes it is just a suggestion and does what he wants anyway.

•Conservatives feel there is a right and wrong.
•Liberals feel that nothing is really wrong... unless it is believed by a conservative.

Sadly this is all so true. A liberal is basically someone who believes that the state, not the person, is the responsible party.

Anything that makes Obama look bad (IOW, exposes the truth) is OK with me...