Seriously, now, Barack Obama? The Nobel Peace Prize? Peace Prize? What, exactly, has the President done to facilitate peace? In fact where is this Peace he’s being awarded for? Anywhere? Maybe in Afghanistan?

After two years of political campaigning, where candidate Obama proclaimed Afghanistan to be the ‘good war’ which Bush had taken his eyes off, how has President Obama brought Peace to Afghanistan? He managed to speak to his General in the field once, while availing himself of the Letterman show - and other venues - many times since assuming the ‘throne’. But only after the General in Afghanistan blurted out that he’d only spoken to his Commander-in-Chief once, did Obama deign to summon the General to his presence. In Copenhagen - ‘member that?

And what did they decide to do in Afghanistan? Well, that ain’t been decided yet. So, no Peace there.

Maybe in the volatile Middle East? Did he bring Peace there? Naw, all Obama did there is cozy up to the Islamists in the area and dis the Israelis. As yet ... no Peace.

Iran? No, he’s offered to chit-chat with the murderous Mullahs, but no Peace.

North Korea? Nah, the Hermit is still pretending to be in charge of a real nation rather than a starving basket-case that happens to have nuclear weapons and missiles. No Peace there.

Well, maybe the Prize is for the Peace he’s brought to his homeland. Chicago must be jolly and peaceful, now that it’s adoptive Son is the Prez. Right? No? More deaths by murder in Chicago than American deaths by War in Afghanistan? Hmmmm.

So where’s the Peace?

Turns out it’s not a Prize for achieving Peace - not anymore - but for promising Hope and Change! Wow!

Well, we all knew the Prize had become meaningless over the past few years. So this is not a huge surprise. But really, what has he done to merit the Nobel Peace Prize?

I haven’t done anything either. Maybe I should begin to campaign for the next Prize, eh? After all, I’ve done as much to achieve World Peace as Barack Obama.

Seriously, now. What has he done? 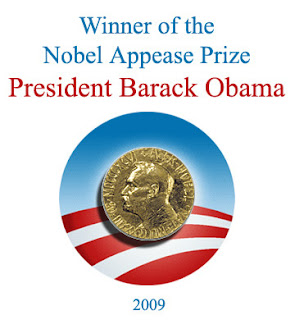 What has he done? Nothing but make lots of speeches, associate with murdering despots & dictators, apologize & degrade the US, and put the world's agenda ahead of his country's needs.

Evidently, this is what qualifies him for a Nobel...

He made the commies happy by replacing Bush, which is all it takes. That particular Nobel prize is now meaningless.

They gave it to Arafat, too.

Thanks, Patrick. That seemed to work!

Hope I can remember.