Will It Be Tim Pawlenty?

Red State has a few posts to let you know a few things about the Governor of Minnesota, touted by some as the VP ick that John McCain will make.

Erick Erickson has "Get To Know Tim Pawlenty"

I'm confident enough to put this up now, but willing to be wrong.

Just so you know the Obamamaniacs are not sitting quietly, thinking peaceful, hopechangey thoughts, Kim Priestap has noted at Wizbang, "Obama Camp Ready for Pawlenty", and says,

If tomorrow John McCain announces that Rick Pawlenty will be his vice president, the Obama camp is prepared to smear him with the Minnesota bridge collapse even though it was a design flaw that led to the disaster. That, however, won't stop the O campaign from trying:

"The Obama campaign signaled a willingness on Thursday to say that the 2007 Minneapolis bridge collapse raised management questions for Minnesota Gov. Tim Pawlenty (R) while also maintaining that the populist argument it is building against John McCain will continue even if the presumptive Republican nominee taps the son of a truck driver as his running mate."

Ahh, the New Politics of the Obamessiah. Hope, Change, and Unity in lying and smearing any who oppose The One.

Now, I don't know who McCain is choosing, though I was hoping for Sarah Palin. But I did have some time this afternoon to waste, so I Paint Shop Pro-ed this weird banner, just in case! Click for an embiggened image. 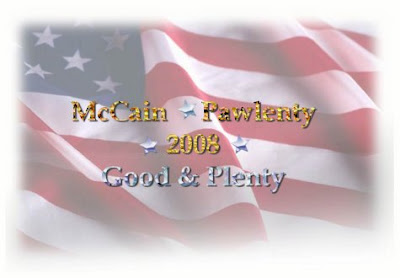 'Sides, I still kinda like it. Heheheee!
Posted by benning at 8:54 PM

And now we know! It's Sarah Plain!

I am now officially happy! LOL

Ha ha! "Embiggened"? "Finally, something I can really get behind with enthusiasm!" Whip out the lotion!

You really like Palin, eh? Now I see why McCain choose her. She's a beauty queen from 1984, but her politics won't cut the mustard.

Sarah Plain and Tall??? Benning, bad marketing like that won't get her any votes. Is she answering a farmer's personal ad?