Unlike the Obama Campaigns snarky comments on the Palin nomination (eventually Barack gave a stumbling, though gracious, congratulations), Geraldine Ferraro - Vice-presidential candidate on the Mondale ticket in 1984 - was gracious and classy. She didn't snark about Sarah Palin's Party affiliation, age, experience. What she said - as reported by Dallas Morning News - was:

The only other woman on a major-party ticket – Democrat Geraldine Ferraro, who ran with Walter Mondale in 1984 – said the nomination of Sarah Palin could make a difference in the campaign. "There are a lot of women who are disaffected by how Hillary [Rodham Clinton] was treated ..."

And either way, she said, the choice is historic. "I've spent a lot of time over the last 24 years saying, 'Gosh, I wish I weren't the only one,' " Ms. Ferraro told a New York TV station.

And Senator Hillary Rodham Clinton? What did she think about McCain's choice of the Alaska Governor as his running-mate?

"We should all be proud of Governor Sarah Palin's historic nomination, and I congratulate her and Senator McCain. While their policies would take America in the wrong direction, Governor Palin will add an important new voice to the debate."

Hits the right note, I think, for a political opponent. Again, it was gracious and classy.

A reminder to you. Here's what the Obama campaign rolled out shortly after the announcement. As Elizabeth Holmes reports:

Even before John McCain and Sarah Palin took the stage to make the Republican presidential ticket official, Barack Obama's campaign slammed the choice of the young Alaska governor.

"Today, John McCain put the former mayor of a town of 9,000 with zero foreign policy experience a heartbeat away from the presidency," Bill Burton, Obama campaign spokesman said in a statement that hit reporters inboxes at 11:47 a.m. EDT.

McCain Communications Director Jill Hazelbaker had the right reponse for the Obama campaign:

It is pretty audacious for the Obama campaign to say that Governor Palin is not qualified to be Vice President. She has a record of accomplishment that Senator Obama simply cannot match. Governor Palin has spent her time in office shaking up government in Alaska and actually achieving results -- whether it's taking on corruption, passing ethics reform or stopping wasteful spending and the 'bridge to nowhere.' Senator Obama has spent his time in office running for President

Elizabeth Holmes picks up the thread:

An hour and a half later [following their campaign's snarky comment], Obama and his running mate issued a statement of their own—with a much different tone. The congratulatory statement from Obama and Joe Biden said the appointment is "yet another encouraging sign that old barriers are falling in our politics. While we obviously have differences over how best to lead this country forward Governor Palin is an admirable person and will add a compelling new voice to this campaign," said the joint statement.

The only reason for that bit of backtracking, in my opinion, is the bad press it received. Yeah, Obama/Biden is change we can believe. Huh? 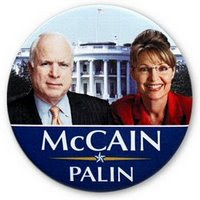 Oh, what the heck, just go visit her at Sundries!
Posted by benning at 6:56 AM

I admit it - Hillary hit the right note with that statement about Palin.

Obama's team, on the other hand, showed what fools they are by mentioning lack of experience.

But here's the sad part. I spoke with a cousin of mine who'll be voting for Obama. And she swallowed that nonsense from Obama's team! True Obamamaniacs are not able to see the light; they are totally deluded.

AOW: Some will see the truth, some won't. That's how it's always been.

McCain's running mate is quite interesting:

I just finished a bio on both McCain and Obama. Obama has much more experience than Palin. You don't read much, do you?

Sure all the Hillary fans will love Palin. Palin in a Pantsuit