Two Jewels Set In The Crown

crosses the finish line to win the Preakness Stakes on Saturday.

Coming around the final turn, in the 133rd running of the Preakness Stakes, at Pimlico Racetrack in Baltimore, Big Brown ran the same race he ran two weeks ago at the Kentucky Derby. Once again the big horse ran away from the rest of the field. No other horse was close at the finish.

Breaking easily out of the starting gate, Big Brown took the initial lead, the jockey - Kent Desormeaux - reined him back, and Big Brown was passed and turned in toward the rail. He gained the third spot for most of the race until heading into the final turn. Then the jockey steered him out from the rail and outside he went. Just behind the second place horse Big Brown began to surge, and the two horses passed the leader. Then Big Brown moved ahead and began the dash to the finish line. 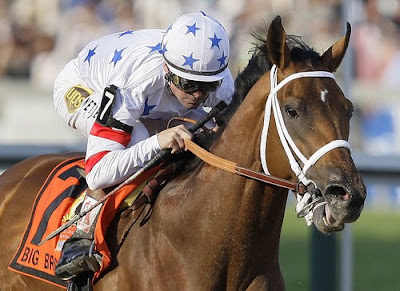 Once ahead, and aimed at the finish-line, Big Brown pulled away. The jockey didn’t use his whip - he didn’t need one. As the horse moved along after the race, cooling down, he was still eager to run, his ears flicking back seeking a contender. After all, there hadn’t been a contender during the actual race. Macho Again finished second, and Ichabod Crane was third.

Kent Desormeaux rode a perfect race for Big Brown. He constantly looked over his shoulder, under his arm, wherever he could, to see if any horse was gaining. He held Big Brown back until the end, making sure that his colt used just enough energy to win.

This looked almost like a repeat of the Derby, sans the tragedy following the end. 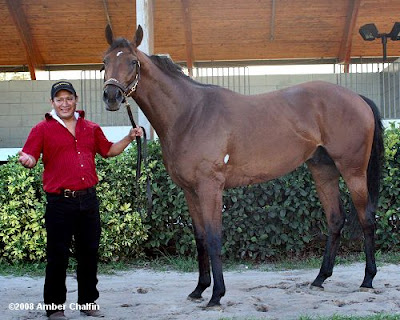 So, Two Jewels are in the Crown. Can Big Brown win the Belmont Stakes in three weeks? If so Big Brown will be the first colt to take the Triple Crown in 30 years. The year was 1978. The horse was Affirmed, whose exciting matches against Alydar in all three races were some of the most exciting races ever run. 6 horses since 1978 have won the first two races of the Triple Crown. None has succeeded. June 17 will see whether this horse can do what no other has done since Affirmed. Win the Triple Crown.

Big Brown has now run 5 races in his career. Not a startling number unless you consider it’s a small number to have run. And he’s undefeated. Will he make it 6 wins without a loss?
Posted by benning at 6:52 PM

They really are SUCH beautiful creatures!

He reminds me of Barbaro. That's why I didn't post about the Preakness.