An Obama Thursday: Is He Serious?

Barack Obama, linked to quite a few unsavory characters, including a racist, conspiracy-theorist Pastor, and an unrepentant terrorist from the 60s Weather Underground, continues to mis-step, mis-speak, and wander into corners from which he cannot escape. Now there's a suspicion that his church, the one headed, until recently, by the racist, conspiracy-theorist Pastor aforementioned, as a part of the United Church of Christ, has been using its tax-exempt monies to support Obama's candidacy. Something that is illegal, not to mention unethical. It's also something that would call for swift punishment were this a Republican candidate being so supported.

From "Obama's Sword of Damocles", at the Velvet Hammer blog:

[...] The Democratic Party then had to persuade the New Jersey Supreme Court to bypass the deadline for ballot changes to replace Toricelli with Frank Lautenberg. It is more than likely that the Democrats will find themselves in the same situation this year if Obama becomes the nominee, because of Obama's questionable use of the United Church of Christ's tax exempt resources to support his campaign. The Internal Revenue Service is currently investigating Obama's church and, depending on when it announces its findings, it will render Obama unelectable or (should he be elected before the IRS announces its findings), leave him with a crippled and scandal-ridden Presidency.
[...]

Obama does find interesting ways to get his hands on money, doesn't he? His dealings with Tony Rezko, in Chicago, are still being investigated, though the MSM seems uninterested. As usual, they are not doing their jobs, but continuing to act as cheerleaders and shields for Barack Obama. No wonder Hillary Clinton seems shocked at the protection Obama's been getting from the MSM. It used to be focused around the Clintons. Now she's been utterly abandoned. 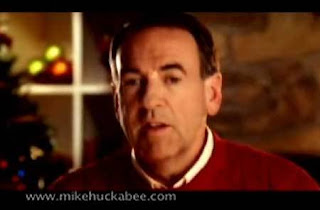 Obama's use of a religious image, just before the Kentucky Primaries, is a little unsettling. Mike Huckabee caught the wrath of the MSM/Democrats when his Christmas message had what appeared to be a cross in the background (it was a bookshelf, artfully filmed to show it as a cross.). It may have been a tad tasteless in the middle of a primary campaign to pull that sort of 'subliminal' nonsense. But after all a cross in a Christmas message fits. A Christian symbol in a Christian Festival message. 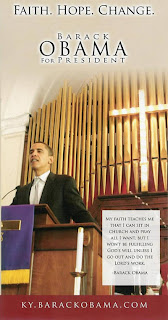 But Obama's add was nothing subliminal at all. It was 'in-your-face', bold, obvious. And the message could not have been clearer. Obama was telling those White, gun-holding, Bible-thumping hicks that he is a Christian! A proud Christian. Nothing to be scared of; nothing to worry about!

Unethical, immoral, and tasteless is what the ad was. But I am not surprised. Not by anything the Obama campaign does. Listening, when I can stomach it, to a speech by Obama, his error-laden message makes me cringe. His outright lies are ignored by the media. And his supporters don't care. He's the Second Coming and you are a racist if you don't support him, too.

Obama may be the first viable 'black' candidate to run for President of the USA, but he's not a viable candidate to a lot of people. And it has nothing to do with his color. It has everything to do with his lack of judgment, his poor understanding of economics, his paucity of knowledge of the history of the USA. Even his comments using Biblical Scripture show a bizarre grasp of Christianity, much less Theology.

Obama's led a fairly sheltered life. He spent much of his formative years away from the United States of America, in Indonesia, or far from the mainland in Hawaii. He was placed in expensive prep schools, which further moved him away from his peers. Then off to Law school. His schooling gave him nothing in the way of a firm grasp on American life. Instead it taught him how to act like the privileged lad he was.

So, Obama may be a very educated man, but he isn't the smartest. For all the crap thrown on George W. Bush in his political life - from friends and foes alike - he managed to graduate from Yale and Harvard, build a very successful life, and win the Governorship of Texas and the Presidency of the United States of America. He did that with hard work, determination, and even quite a bit of intelligence, despite what his detractors wish. GWB is not the best President we've ever had. But he's been honest. Unlike WJClinton, JECarter - a very prolific liar. (Read the Hawkins interview with Robert Novak) - RMNixon, LBJohnson, and many more. Obama can't come close to GWB's level of honesty or principles.

And guess what? Obama is running against GWBush - who isn't running. That is when Obama can tear himself away from lying about John McCain. Maybe Obama believes what he's saying. Maybe he's being told things that aren't true and passing them off as fact. But he needs to find someone who will speak truth to him rather than stroke his immense ego. As the Roman Conqueror would be told as he rode through the streets of Rome in triumph: "All Fame is fleeting."

Obama needs to find the Truth. And stop being the puppet fo the insidious, power-hungry Left. Until then I will never vote for him. His color notwithstanding.

Enough of that. Here are some more amusing items about the Obamessiah.

Barack Obama: gaffe Machine, at Michelle Malkin’s blog, is a scary list of some of the errors of thought that continue to plague BO. I suggest you reacquaint yourself with BO's problems with the real world, if you still have any questions about him. While there, read the comments, too. I did. And I found some funnies, including these:

A teacher in Elmira , New York , who is an Obama supporter, asked her 4th grade class,'How many of you are Obama fans?' Not really knowing what an Obama fan is, but wanting to be liked by the teacher, all the kids raised their hands, except for Little Johnny.

The teacher asked Little Johnny why he has decided to be different?

Little Johnny said, 'Because I'm not an Obama fan.'

The teacher asked, 'Why aren't you an Obama fan?'

Annoyed by this answer, the teacher asked, 'If your mom was a moron and your dad was an idiot, what would that make you?'

With a big smile, Little Johnny replied, 'That would make me an Obama fan.'

BOs favorite show as a kid - the 4 Stooges.

BO reports that his parents actually inspired the book, "Uncle Tom's Cabin," which was actually written about his uncle Tom - who actually really wasn't his real uncle but they were close.

BOs favorite part of the US Constitution, "Black Americans shall not be accused of racism, and BOs ears shall never be mentioned."

BO remembers that while growing up, he personally handed Joseph Smith several plates of gold, but denies being a moron.

BO denies any mob connections although he is a Chicago politician with ties to indicted Tony R. "He is a supporter and a good friend and if you doubt it go ask him and he'll break your legs. Now get outta my face."

BO is half white, abandoned as usual by his black father (who is Muslim) and was raised by whites, denies all knowledge of white people except that they are bitter racists.

Bo is very afraid of his wife who can easily beat his *ss, or worse, tease him about his ears.

No matter how you slice it, BO stinks.

Perhaps the funniest was a link "Obama Bruvver" from nyc123me which brought you to this: 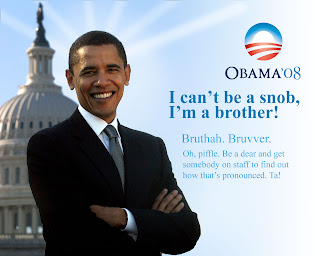 That Reublican kid joke was perfect.

Yeah, I've heard it before in different contexts. But it always makes me smile. :D

I can't believe that Obama has the gall to come out with that add considering his 20-year membership to the Church of Bigotry.

Brooke, if liberals have too much of anything it's gall!

Great post, Benning. If Obama gets the White House we may as well kiss our butts goodbye. This is one scary dude! The only one I can think of who's scarier than him is his wife!

Brooke: That's merely a distraction from the real issues, Obama says so.

Gayle: I think Obama has the potential to be an even bigger Loser than Carter was. Should he win in November I think we'll look on the Carter years with fondness in comparison. Yeesh!

I say let him self-destruct and take the Donks down with him.

Keep talking without thinking and 2008 will surprise all the experts. I hope you do that.

"But he needs to find someone who will speak truth to him rather than stroke his immense ego."

He doesn't want that, nor is he seeking it. He is perfectly content, no... HAPPY to remain in camo and reserve the avenue of blaming someone else for his "misinformation". Sounds vaguely "Clintonesque", doesn't it?