Tomorrow, May 22nd, is National Maritime Day in the United States. Frankly, most Americans ignore this observance if they know about it at all. But the United States was founded by people who did not walk to the North American continent but sailed here. The Maritime legacy and traditions of this country are older than the nation itself.

National Maritime Day is a day for the U.S. to observe its proud maritime heritage and honor the men and women who serve and have served as merchant mariners.

From the Legal Information Institute at Cornell University:

(a) Designation.— May 22 is National Maritime Day.

(b) Proclamation.— The President is requested to issue each year a proclamation calling on—

(2) United States Government officials to display the flag on all Government buildings on National Maritime Day.

President Ronald Reagan, in 1986, gave us this history lesson as a part of his official Proclamation:

From the very beginning, America has been a seafaring Nation. In fact, the discovery of our continent was the result of one of the most daring seafaring adventures in human history. Even before the founding of the Republic, our people looked to the sea -- for peaceful trade and to ensure prosperity.

The sea-lanes were the pathways to new beginnings in a new world for millions who came to our shores and helped to build a country already rich in trading and seafaring traditions.

American maritime leadership was also reflected in ship design. The fabled "Yankee Clippers" of the early 19th century represented the first major innovation in wind-powered craft since the 15th century. They dashed across the seas at unprecedented speeds, making them the ultimate in merchant sail. And when steam-powered vessels began to eclipse sailing ships in the latter part of the 19th century, it was largely the result of pioneering work by two Americans, John Fitch and Robert Fulton.

Since America fronted on the world's two largest oceans, it was fitting that an American naval officer, Alfred Thayer Mahan, should have been the author of the first major historical study of the influence of sea power in geopolitics. Theodore Roosevelt, who as a young man was the first to review Mahan's book, later, as President, took the lead in providing the United States with its first world-class navy. From this rich heritage, America emerged as the greatest trading Nation on earth.

All of us today owe a debt of gratitude to the civilian merchant mariners who have braved the perils of the sea and the assaults of enemies who threatened our way of life. Through the centuries, untold numbers sacrificed their lives to preserve American freedom. In World War II alone, nearly 6,000 U.S. merchant seamen aboard 733 American ships were lost in enemy attacks. But our sea-lane lifelines remained open.

It is appropriate that we pause to pay tribute to those civilian sailors, past and present, in our commercial fleet and to all other Americans who support them and guard the lifelines of the sea that sustain us all.

In recognition of the importance of the American merchant marine, the Congress, by joint resolution approved May 20, 1933, designated May 22 of each year as National Maritime Day" and authorized and requested the President to issue annually a proclamation calling for its appropriate observance. This date was chosen to commemorate the day in 1819 when the SS SAVANNAH departed Savannah, Georgia, on the first transatlantic steamship voyage.

In Witness Whereof I have hereunto set my hand this twentieth day of May, in the year of our Lord nineteen hundred and eighty-six, and of the Independence of the United States of America the two hundred and tenth. 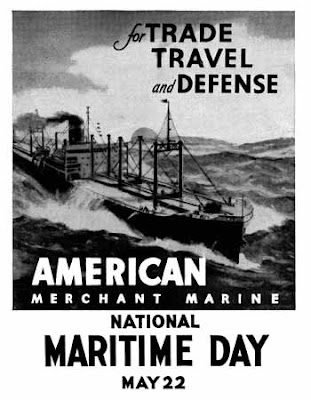 I've never celebrated National Maritime Day. It certainly passes below the radar for most Americans. But it's important to understand why it is a 'holiday' and what we owe to the many Americans who keep our nation moving, commercially and militarily, on the high seas, and have done so since the very inception of the United States of America.

As mentioned in the proclamation, the day of the observance commemorates the sailing of the S.S.Savannah on May 22, 1819. This ship was the first steamship in the world to sail across an ocean, traveling from Savannah, South Carolina, to Liverpool, England. She made the trip in 29 days, 4 hours. She used the steam engines part of the time, and was under sail the rest of the time. So new was the ship and its technology, that many aboard wondered what the reaction would be when she reached Europe. As this page about the S.S.Savannah describes:

Finally on May 22, 1819, the Savannah "put to sea with steam and sails" on the historic trip that would take her to England, Sweden and Russia with stops in Norway and Denmark before returning home.


[Captain] Moses Rogers well understood the reaction of uninformed persons seeing for the first time the Savannah sailing with bare poles under steam. He eagerly awaited for the first European to react, which happened off the coast of Ireland. An attendant at a signal station spotted the Savannah and immediately assumed she was on fire.

The speedy British revenue cutter Kite was dispatched to the rescue. However, the Kite found herself chasing the Savannah for four or five hours before she caught up to her, enabling the "rescuing" Lt. Bowie to board her and discover the incredible truth. As can be imagined, the newspapers told and retold the story to delight their readers - ever expanding on the length of the chase and the prowess of the American vessel and her captain. A Russian newspaper not only changed the locale of the chase to Scotland, but also claimed that the Kite never caught up. Actually, the most amusing part of the incident was not revealed until years later in separate accounts by Stevens, Rogers, and A. Thomas, a fireman on board. The only way the Kite could stop the Savannah was by firing several warning shots across her stern! 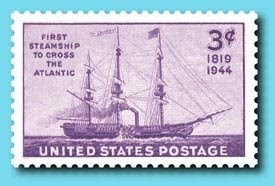 The Savannah was ahead of her time. Too far ahead, it seems:

In October 1819, the Savannah started the long trip home, making brief stops at Copenhagen and at Arendall, Norway. On November 30, she anchored once more in Savannah, a noble marine experiment completed. Yet for all the effort and talented thinking lavished on her, she was a financial failure. Steamboats on a river were one thing: ocean-going steamships another. Not until 1838, when the British Sirius and Great Western crossed the Atlantic under continuous steam would the public trust themselves or their cargo to this new type of ship. No other American steamship succeeded until the Massachusetts in 1845.

A postage stamp was issued to commemorate her voyage, and mark National Maritime Day, in 1944.

For more information about Maritime Day, or the Merchant Marine, try the DOT's Maritime Administration page: "A Short History on National Maritime Day"


Note: I apologize most abjectly for not posting for Armed Forces Day. I fully intended to do so, but ... Dang! Anyway, here's an earlier post on the subject, if you're interested. Again, sorry. I should've been Johnny-on-the-spot!

Don't forget: Memorial Day is this weekend - May 26. Observed on Monday, it was originally celebrated on May 30th. To give all of us that 'three-day-weekend' we craved, Congress - always wise in its ways - added Memorial Day to the Uniform Holidays Bill. Thus it is celebrated on the last Monday in May. Nothing like moving a solemn remembrance of fallen American servicemen and women to a more convenient three-day-weekend to make us all remember, eh?
Posted by benning at 4:33 AM

You're right, so many of us don't know about or just ignore this holiday. Thanks for the words of Reagan to remind us.

I should've taken out my boat...