Thoughts For This Morning

I've been busy, writing and goofing off, since my last post. The writing is part of our yearly Private Novel Writing Month, which is a mid-year version of National Novel Writing Month. Some of us who are alumni of the F2K: Free Writing Course offered by Writers' Village University, got together following the NaNo event in 2005 and wondered if we could do something like it a few months later So I set up a blog and invited all the folks who's expressed interest, and off we went.

The goals are the same: 50,000 words in a month. Easy, you may think, but not really. Not when you are trying to write something new. One of our ensemble - a lady from Malaysia - managed 102,000 words that year! Some of us - me, included - made the 50K mark. Didn't matter. The idea was to spur the actual writing by laying down a deadline. It seems to work. And this is our third year doing PriNoWriMo. One week down, more to come! 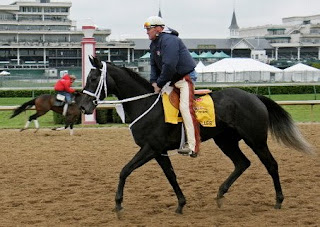 Anybody with a lick of sense knows that a horse that finishes in the money in a Triple Crown race is a valuable commodity, if nothing else. That horse is worth much more than the money she earns on the track itself. No owner would willy-nilly have a horse put down if she could be saved. Her survival would mean a lot of money flowing into the owner's coffers in the future.

The simple, sad fact is that Eight Belles suffered what is a catastrophic injury after the race. Both her front ankles broken. She had nothing left to stand on. Casts are out of the question. Hoisting her in a sling would not work. Huge animals like thoroughbreds are heavy and easily suffer respiratory ailments slung up like that. All that weight causes problems inside the horse's body. And without any way for that horse to put weight on her front legs ...

The track veterinarian made the right call. He put the filly out of her misery. It was quick and relatively painless. She received an injection and went to sleep. The old way of shooting the injured horse is not used at a modern race track.

The weeping Moonbats should be thankful that this horse was put down quickly and efficiently. Eight Belles, as I said before, ran a tremendous race. Her ending was sad. But it was, and will be, a part of horse racing.

And I wanted to know a little more about this candy. So, naturally, I googled!

And information about the creator of the Reese's Peanut Butter Cups isn't exactly overwhelming. But there's enough to give you an idea. 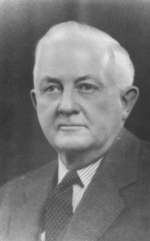 Harry Burnett (H.B.) Reese made candies in his basement. He didn't start with Peanut Butter Cups, for which he is known, but with a few simple candy bars. Reese's Raisin Clusters and Chocolate-Covered Dates were fairly well thought of. But H.B.Reese hit his stride when he developed the Peanut Butter Cup. That was introduced in the mid-1920s.

Reese, born in 1879, in Frosty Hill, Pennsylvania, was raised on a farm, and as an adult worked as a farmer, fish packaging worker, and did other factory work. He first played around with candy-making in Hummelstown, PA, and then in Palmyra, PA. He was hired by Milton Hershey to work at Hershey's dairy farm about 1916. Eventually he went to work in one of the Hershey chocolate factories. Reese was still working there when he started making his own candies in the basement of his house. I think he'd probably learned quite a bit from Milton Hershey about making candy. 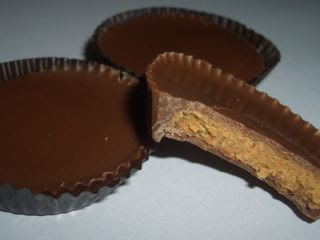 After 1928 his Peanut Butter Cups - originally called "penny cups" because they cost a penny each - were becoming very popular. So popular that he quit his Hershey's job and built his own candy-making factory. Right in Hershey, PA. The demand for his Reese's Peanut Butter Cups grew so large that he stopped production on his other candies and made Peanut Butter Cups only. 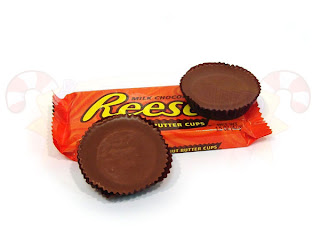 Mr. Hershey didn't seem to see Reese as a competitor. Reese was, in fact, a customer of the Hershey company, buying his chocolate exclusively from Hershey. Reese made his own peanut butter mixture for the filling. The chocolate for Reese's Peanut Butter Cups was supplied in 10-pound blocks and Reese eventually became Hershey's second largest chocolate customer after Mars. It is reported that Milton Hershey kept a stash of Reese's Peanut Butter Cups in his desk. Not a bad recommendation, is it?

Eight days shy of his 77th birthday, on May 16th, 1956, H.B.Reese died of a heart attack. He was buried in the Hershey Cemetery, alongside his wife and just footsteps from Mr Hershey's grave. Seven years after Reese's death the H.B. Reese Candy Company was bought by Hershey's. His children received about 5% of the Hershey stock. The price for the company? $23.5 million. That's a lot of money for a candy company, but I suspect Hershey's never had any qualms about it. Reese's Peanut Butter Cups continue today, with new additions, some good, some not-so-good. The advertising remains funny, and refreshingly original. And the Cups themselves? I like 'em! They aren't M&Ms, but I do like 'em, and I like the Reese's Pieces, too.

Mr. Reese's grandson, Andrew Reese, has written a biography of his famous grandfather that is due out sometime this year. If you're interested in Reese or his Peanut Butter Cups, this might be an interesting book to buy. But buy mine first, Dagnabbit!

Chocablog has a British take on the Reese's Peanut Butter Cup.

So there you have my thoughts for this morning. I had grits for breakfast - something I only do on my days off - and a nice pot of coffee. I'm still surfing the Web a bit, and rereading what I wrote yesterday to spur more scenes in m head. I will be writing!

Have a great day, Friends!
Posted by benning at 8:37 AM