A second post for the day. Be amazed at that, if nothing else! Click on any image for a better view. All lightning images are courtesy of Terra. 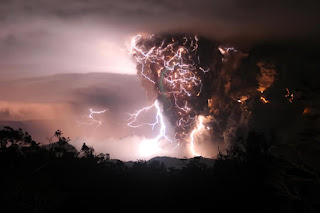 The eruption of a volcano is terrifying. It is also awe-inspiring to watch - from the safety of your living room - magnificent in it's fury and immensity. Images of the recent Chilean eruption of the volcano Chaiten show once again how terrible the earth can be. How utterly insignificant humans are in the face of such natural ferocity.

One of the most awesome displays during an eruption are the electrical discharges that accompany it. The lightning show amazes the observer. Lightning not only crackles from cloud to cloud, and cloud to ground, but crawls around the billowing smoke and ash clouds. And though I have been aware that lightning often accompanies volcanic eruptions, I only just started wondering why? What causes lightning to appear during an eruption? 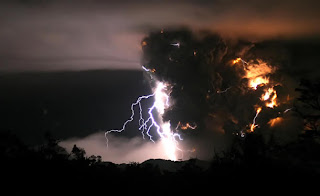 Ian O'Neill at Universe Today has an explanation I think I understand:

Lightning can happen as a result of a volcanic eruption. As the hot ash rises through the cooler atmosphere, transfer of charge occurs. This excess of electrons within the cloud makes it act like a capacitor, and should the conditions be correct, huge electrical discharges may be observed as bolts of lightning during volcanic eruptions. It seems that the Chaiten volcano's recent activity has created the perfect conditions for such a show, allowing photographers in the region to capture some stunning images.

Catching Patrick's post reminded me that I had wanted to look into this phenomenom. Thanks, Patrick! Regarding this eruption, Universe Today also remarked:

This region of South America has some very active plate tectonics and has been dubbed "Andean Arc" region of Chile, Peru, Ecuador and Columbia containing around 200 to 300 volcanoes. Volcanologists are highly concerned as many of these volcanoes are located in densely populated areas, so they are studying the Chaiten eruption very carefully. The small town of Chaiten is being threatened by this particular eruption, but fortunately the surrounding area is otherwise unpopulated.

Although I've read some accounts saying this volcano has not eruptd in 450 years, some sites indicate that Chaiten has been slumbering for as many as 9,000 years. Earth Observatory - Natural Hazards reports:

Radiocarbon dating of the last lava flow from Chaitén Volcano suggests that the volcano last erupted in 7420 BC, plus or minus 75 years, says the Global Volcanism Program. The volcano has a history of explosive eruptions with pyroclastic flows associated with dome collapse. During an eruption, some volcanoes build a dome of lava. Eventually, hot blocks of lava break away from the dome, triggering a fast-moving avalanche of hot volcanic ash, gas, and lava, called a pyroclastic flow. As of May 5, ash continued to rise from the volcano, but no pyroclastic flows had been reported.

The image from that site is a satellite photograph taken on May 3rd. It shows the extent of the plume. 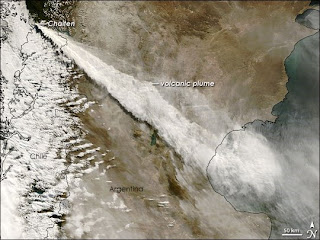 Wow is right! Man did I need a escapism-type of posting coming back from the cave.... and you delivered. I must have stared at these pics for 20 minutes before posting. As an amateur photographer I live for the day when i can get even one shot like that.... even by sheer accident. The satellite shot is especially noteworthy. I'll be back in the next few days to catch up my reading....you've been busy!

That is one impressive display, to say the least.

When Yellowstone erupts in the next 200 years or so, it will probably terrifyingly beautiful but I don't think I want to see it.