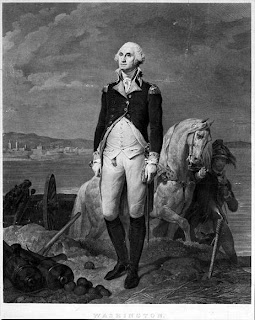 As we celebrate this Presidents Day, which was originally begun to honor the nation's first President, George Washington, perhaps we need to remember who he was. He was not some dead white guy, as the MSM and the Leftists would see him reduced to. He was not a fiendish slave-holder, operating outside the borders of acceptable society. He was not a power-hungry militarist grasping for power over his fellow man.

George Washington was what one writer called "the Indispensable Man". He was the single individual who had the right amount of wisdom, ambition, experience, canniness to help a new nation come into existence in a time of Revolution, and having returned to his civilian life after that war was won, reluctantly accepted his election as the nation's first Constitutional President. Not as learned as John Adams, who was also a great man, nor as visionary as the philosopher/legislator Thomas Jefferson, who was also a great man, George Washington embodied so many attributes needed by the American Colonies at that time and place that no other man was qualified to step into his shoes. He was unique. He was the most important man of his time. And we honor him on this day.
George Roche, of the Society for the Advancement of Education, wrote an article entitled, "George Washington's Legacy - background and contributions of US first president". In it he wrote:

The War for Independence essentially was won in 1781 after Washington pulled off a stunning surprise attack at Yorktown, but his army couldn't be disbanded until a treaty was signed. His men were furious, since they couldn't return to plant crops and care for their families. Worse yet, most of them hadn't been paid for two years.

As late as March, 1783, they still were marooned in a dirty, crowded camp in Newburgh, N.Y. Congress continued to mm a deaf ear to Washington's pleas that the men be paid or discharged. It wasn't just the enlisted men who were grumbling about this shameful ill-treatment. Scores of officers were circulating anonymous pamphlets calling for mutiny. The rag-tag army had won the war, but now stood to lose the peace. There was a possibility that the American experiment would be over before it really had begun, and the nation would be plunged into bloody civil war.

Then, Washington performed one last desperate act. He showed up unexpectedly at a secret meeting that was designed to launch the mutiny. He asked if he could speak and reluctantly was given the floor. Washington called for his officers to be patient just a little while longer. He reminded them that the army could not be a law unto itself and pointed out that they had fought together to institute democracy, not a new kind of tyranny. He concluded by saying, "I have a letter here from a Congressman that will prove the good faith of our government." He drew the parchment from his pocket and unfolded it.


The light in the tavern was too dim for him to make out the words, though. With a trembling hand, Washington fumbled for his glasses, which he hated and never had worn in public before. In a deeply mortified tone, he apologized, "Gentlemen, you will permit me to put on my spectacles, for I have not only grown gray, but almost blind in the service of my country." He started to read the letter, but his voice, as well as his composure, deserted him. He stalked out of the room without uttering another word.

The officers were all hardened soldiers who had witnessed terrible sights without flinching. Yet, seeing their beloved commander reduced to such a state, they began to weep openly. They immediately pledged to follow orders and quell all attempts at mutiny. Once again, Washington had saved the new nation from destruction.

As a young boy, trying to educate himself beyond the feeble schooling he had received, he read and memorized more than 100 rules of conduct devised by French Catholic monks, copying them down in his journal carefully. Among those rules of conduct were these:

"Speak not when you should hold your peace"
"Always submit your judgment to others with modesty"
"Be not hasty to believe flying reports to the disparagement of any"
"Let your conversation be without malice or envy"
"When you speak of God or His attributes, let it be seriously"
"Let your recreations be manful, not sinful"
"Labor to keep alive in your breast that little spark of celestial fire called conscience."

All of these, and many more that he copied and memorized, would do wonders for so many of our elected officials today, not to mention our politicians and the members of the American media. But they would scoff at such silliness even as they continue to degrade and denigrate the Father of our Country.

As noted above, George Washington stopped what could have been a bloody Mutiny by the Continental Army, preserving the theory of civilian control of the military, before we had truly become a nation. He had the power, and the popularity among his officers and men, to have taken control of the fledgling government and become America's King. But George Washington would have none of it. That was not why he had fought the British. 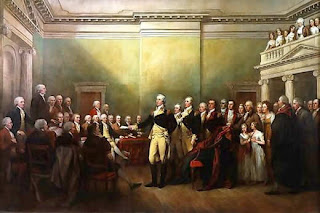 At war's end Washington rode to the Maryland State House, where Congress was sitting, and resigned his commission, offering his farewell address to the Congress.

[...]
I consider it an indispensable duty to close this last solemn act of my Official life, by commending the Interests of our dearest Country to the protection of Almighty God, and those who have the superintendence of them, to his holy keeping.

Having now finished the work assigned me, I retire from the great theatre of Action; and bidding an Affectionate farewell to this August body under whose orders I have so long acted, I here offer my Commission, and take my leave of all the employments of public life.

Leaving the room he mounted his horse and rode all the way home to Mount Vernon to take up his civilian life. Unheard of. And yet it was fully in keeping with the character of George Washington.

Elected as the nation's first Constitutional President, George Washington reluctantly left his home and got to work establishing the office of the Presidency. He was uncomfortable in the post, believing that many others were far more capable than he - not to mention far more willing - and after his second term expired he turned over the reins of power to his elected successor and went home. Unheard of.

George Washington could have ascended the throne of the United States of America, becoming its first King, but never had the desire. He sought only the best for his fellow citizens, acted on their behalf, and in their best interests. And when he was finished with the task at hand, he went home. Every time.

Presidents Day 2008: let's honor the man who made this nation possible. Forget he sales and the nonsense, forget the disparaging comments from pointy-headed historians who know less than they think. Lets give a cheer for our nation's Father. George Washington.

That was a great read. I had not heard the story about the spectacles before.

I heard an Obama ad on the radio yesterday. At first I thought it was a spoof. It was a young girl saying something like: "I'm voting for Obama because he offers hope for the future. Who cares about the past? History is just so yesterday." All spoken in that whiny Valley Girl accent.

Great read and yes...3 cheers to our country and Presidents!..nice work Benning!

I just linked to this.

Thanks, All! I'm hoisting a brew to Mr. Washington!

Regarding Patrick's comment about the girl saying "History is just so yesterday." Well, gag me with a spoon, so are bimbo valley girls!

Great post, Benning. I've been so busy I didn't do a president's day post. Shame on me, but busy is busy. I can't help it. :( Wish we had more people with George Washington's character though. We wouldn't be in the mess we are in if we did!

Now if we could just raise him from the dead and put him back in office. Sadly a man of his caliber comes along once in a century.

I've read a lot of stories about George Washington, but this one was new to me. Thanks, Benning!

George Washington committed to memory those 100 sayings mentioned. Do students do that kind of memory work any more? If not, they should--and at an early age. It seems to me that when students used to do that sort of rote memorization, now so often criticized, the students turned out to be much better people with regard to their character. Anyway, I certainly remember memorizing similar statements and discussing them as well, in upper-elementary grades writing paragraphs or essays related to particular of the sayings. If I recall correctly, many of the sayings we learned came from Poor Richard's Almanack.

Also, back in the days of our Founders, as young boys they read and studied various Latin mottoes--another valuable exercise, IMO.

stoppin by to say howdy!

Washington was quite a man. We owe him a lot. Thanks for the post.

Aww crap.... every time I get full of myself and think I am improving my writing skills,... I come here and realize I still suck.

I love the way you paint a picture man,... this is just off-the-charts good. Beautiful really.

Thanks for the expose.