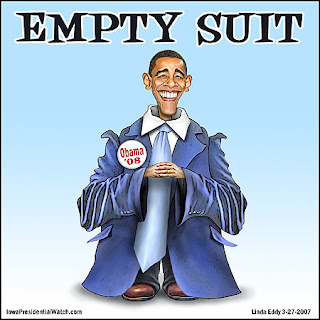 Barack Obama is running on the theme of “Change” and is fighting Hillary Clinton tooth-and-nail all the way. Those who hear him speak say he’s very good - at speaking. His speeches allow him to soar rhetorically while floating along on the clouds of inconsequential ideas. As some on the political Right have said, “He’s an empty suit.” So what’s the big deal here?

Is the fascination that he’s the first competitive black man to run for the US Presidency? Is it that he’s young - something the Democrats seem to cherish above all else - or that he can give a good speech? Certainly it isn’t that he’s a legislative powerhouse. As an Illinois Senator he did practically nothing while in office save cash his paychecks from the state and vote, “present”. As a US Senator he’s simply voted with the Democrats, often to their Left, while offering not one idea that is new, or important, or of any consequence to the American people.

So what is it about Barack Obama? What has the Democrats and the black celebrities all atwitter? What is it about him that makes Leftist media-types go gaga for him?

Well, for one thing he isn’t Hillary! He isn’t shrill and pedantic. He has a certain amount of charisma - an over-rated quality, to be sure - and has youth. He also does not have the immense baggage of Bill Clinton hanging around his neck. The women seem to think him handsome, and he does carry himself well in the public arena. Also, the MSM does not pay any heed to his lack of legislative prowess or record. In fact the MSM simply does not speak on the issue of Obama beyond the feel-good platitudes of his campaign speeches. He speaks also of “Unity”, which to him, and to most leading Democrats, means destroying the First Amendment. Unity of thought is what they seek and desire. Without unity we have a robust Republic, rather than a European-style moribund State. Unity to Obama, as well as his supporters, means you’re with me or against me. And that’s a change for this country, too, if he wins. 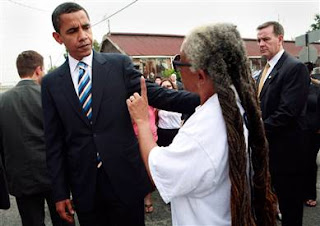 Barack Obama is pretty much whatever his supporters want him to be. The few instances where he has taken any kind of stand have been right down the Democratic line. He spoke out against the Armenian Genocide by the Turks. A brave stance that only everybody not Turkish had already taken years before. And to support a Congressional action on it now, while the Turks were providing support in our fight against the Islamic Terror, was not well thought-out at all. But it went along with the Democrat leadership.

He bravely took a stand in favor of jacking up the pay of Teachers, while opposed to any sort of merit standards. Again, right down the line with the Democrat Party. He tells the public that he doesn’t agree with his own Pastor’s racist dogma, but not in such a way as to distance himself from that worthy Mentor. He continues to belong to a church that advocates Black Power, while assuring the American people that he is not a black radical. He tells us that he will sit down with the leaders of the Middle East to dialogue with them as a way to solve the age-old problems of violence there, while saying nothing about the root of the violence: Islamic hatred of Jews. He has yet to part with the growing anti-Semitism of the Democrat Party, and will probably castigate Israel as a purveyor of violence and oppression. Again, very much in keeping with the tenets of the modern Democrat Party. 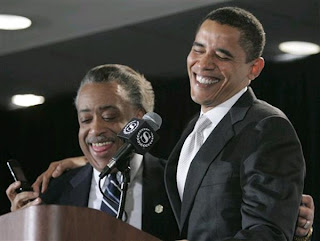 Barack Obama parrots the Democrat Party line from start to finish. So, where’s the change? Where’s the National Renewal he and his supporters seem so eager to effect? Well, it’s nowhere. What Obama proposes is simply more Socialism, less freedom, more surrender to loud-mouthed grievance groups, less spine against criminals and murdering terrorists. In other words Barack Obama wants a Democrat Party Platform enacted despite its un-American aims and roots. His idea of change is to put another Leftists Democrat in the White House. His idea of change is to stifle the speech of those with whom he disagrees. His idea of change is ... more of the same Leftist pap that has become part-and-parcel of the Democrat Party since Jimmy Carter. And the only real change that he offers to the American voter is the color of his skin. He is half-Black and half-White. Of course he runs as a Black man, not as a White man. (Yes, I know that there are racist elements in this Society that would not consider him White, no matter how much White blood he had.)

Change? The Democrat Party offers only a change from the future to the past. They offer a change from Liberty and Freedom to the shackles of a Socialist State. Their idea of change is to destroy the Constitution and replace it with the mindless, empty-souled barrenness of Socialism - a system of government that has failed throughout history and destroyed countless lives over the past century.

Should Barack Obama win the Democrat nomination for the Presidency they will simply be switching skin color in their efforts to steer this nation into the maw of the Socialist dictatorship. Not that Hillary Clinton is far away from that either. She isn’t. But she does seem to have some grounding in common-sense when it comes to the Islamic threat. But we’ll see, eh?

Change? Unity? Buzzwords for the Democrats and the MSM. Empty platitudes to those of us who can still think. Yes, Barack Obama can give one hell of a speech. But he isn’t saying a single, blessed thing. And I doubt he ever will.

Say it enough and you'll believe it. Say it enough. You're the king of the world. Check the facts.

I did. And I didn't do it anonymously either.

Obama and Clinton are more or less the same coin.

The question is, which one will take us to full-fledged communism the quickest.

Lawrd help me, I might actually have to vote for McCain: Socialism light.

Scary, isn't it? But we don't have the greatest of choices this cycle. So we'll have to make do. And that's something Americans always do when things are a bit tough: make do!

It's like a wrote on my blog, Benning. Obama is the modern day Pied Piper. He practically hypnotizes people with his voice. They don't care that he doesn't say what his change is going to be, he says it with such clarity and passion! Sheesh!

The only change would be gender or skin color, nothing significant.

Change is the "buzzword" du jour...in this election cycle, as in many others.

"Say it enough and [they'll] believe it."