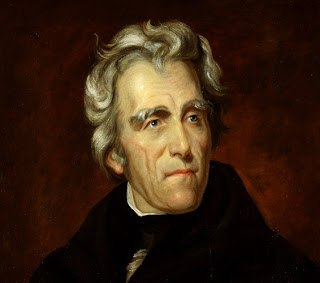 "Andrew Jackson was a patriot and a traitor. He was the greatest of generals, and wholly ignorant of the art of war. He was the most candid of men, and capable of the profoundest dissimulation. He was a democratic autocrat, an urbane savage, an atrocious saint." ~ James Parton, Jackson's first biographer, 1859

Our local PBS station has been advertising the latest documentary for a few weeks now, and it was scheduled to air last evening. I like documentaries. One of the best I ever watched was about the Johnstown flood (narrated by David McCullough) and made me want to know more and see the next documentary the network offered. Last evening's offering, "Andrew Jackson: Good, Evil and the Presidency", was not worth the two-hour screening time. In fact it was a complete waste of time. 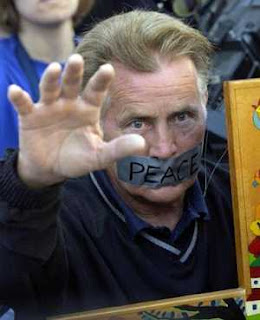 The first indication that this documentary would be a waste was hearing a familiar voice begin the narration. Why would anyone choose Martin Sheen (C - CA) to narrate a serious film about an important person in American History? It isn't simply that Sheen is a radical Leftist Loon - which he is - or an anti-American - which he is whenever he opens his mouth in public - but that Sheen's narration was continually overwrought, breathless, and devoid of any flavor of seriousness that a documentary about our seventh President should have. He sounds as though he's speaking to small children. Indeed, aside from the fact that the documentary claimed, over and over, that Andrew Jackson founded the Democratic Party (not quite, but he certainly took it over and changed it forever), his Militarism and bigotry, paranoia and inability to see any opposition as less than an utter betrayal seems an odd choice for Sheen to agree to laud.

*I suppose that Sheen saw 'Democrat' as Jackson's party affiliation and just couldn't help himself.*

Two hours of this production were two hours too much for me. By the 20 minute mark I had had enough and found myself wandering my apartment seeking something to distract me. At the one hour mark I turned off the TV, switched off the lights, and went to sleep. It was that bad.

Granted, I could have gotten past the breathless quality of Sheen's narration - the director may have thought it was necessary to 'punch up' the production - if the information had been new, or shocking, or in any way interesting. The fact is that though the film used some nice film recreations of incidents during Jackson's life, the film was cotton-candy when I had hoped for something more meaty. PBS says about the documentary:

All these may be very good scholars and biographers. But once they got before a camera they shrank into 'Gosh, gee-willickers' students, showing off their little nuggets of information, making sweeping assertions without referring to the source of those assertions, and generally sounding like starry-eyed Film School Students making their first foray into entertainment. Along the way they managed to make Jackson sound insane - which he might have been, granted - childish, petulant, and evil.

Among the claims to Fame that Andrew Jackson holds is his victory over the British at New Orleans in the War of 1812. Despite the fact that the war had already ended, by the signing of the Treaty of Ghent, the combatants did not know and fought as if everything depended on the outcome. And in some ways it did. Had the Brits won at New Orleans they may have decided to stay right there, as they did in the Old Northwest after the American Revolution, despite their treaty obligations (British forces remained in place until the War of 1812 ended, and caused no end of trouble stirring up the Indians along the frontier). The Battle of New Orleans was a masterful use of terrain and forces by Jackson, and destroyed the British forces at little cost to the American Army (over 2,000 British losses as compared to 100 American casualties). And the documentary allowed about two minutes to this pivotal moment in Jackson's career.

In fact his life seemed to jump from his childhood, and the events that created his life-long hatred of the British, almost directly to his adulthood as a lawyer in Nashville, to the War of 1812. (I exaggerate, but it was covered pretty lightly, and pretty fast) Then on to the campaign for the Presidency! Whee! 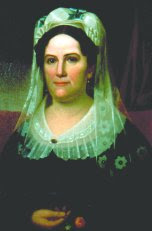 Jackson's relationship and marriage to Rachel Donelson was given a bit more coverage than I expected, and yet remained less than filling. This was the single-most important relationship in Jackson's life. And the producers made it seem a bit tawdry (it was considered scandalous by the elite of the time) but just a bit whacky, too. What it was to Jackson was the single human grounding point in his life. His attempts to protect his beloved wife from the accusations hurled against her, and them, led to duels that left Jackson wounded and at least one man dead. The scandal of his marriage followed Jackson for the rest of his life. For all the bloody actions of his military career, the paranoia and distrust he held for nearly everyone, Rachel was the one person who could calm him, relate to him, and provide a place in the world where ugliness could not enter. That story could have filled the two hours of the production all by itself. And would have been a better use of time.

Unfortunately it was a minor mention in the documentary. Rachel died two weeks after Jackson's 1828 election victory; she had just bought her inaugural gown. Jackson blamed John Quincy Adams for her death - the scandal over their marriage had reared its ugly head during the campaign - and never forgave Adams. Jackson seems to have never forgiven anyone for anything. He was uncompromising.

The "Corrupt Bargain" that handed John Quincy Adams the 1824 election was treated so lightly that viewers had to wonder what the fuss was all about. And I wondered if it was mentioned merely to assuage Democrat sensibilities regarding the "stolen election" of GWB in 2000. The intricacies of the Presidential elections, where the States had vastly different way of choosing electors, was reduced to an "Us" against "Them" simplicity that did not exist. The story of the 1824 election is more exciting than the producers let on, but they wanted to move on, so it was over quickly. Such was the case with so much in this "documentary".

It was about this point that I finally gave up. Compared to the PBS American Experience production of "Ulysses S. Grant", this biography of Andrew Jackson was garbage. See it if you must, enjoy the production values, but don't depend on it for much information. 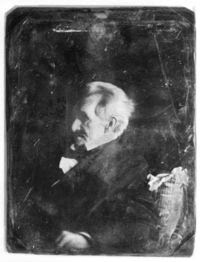 Jackson remained influential in both national and state politics after retiring to The Hermitage in 1837. Though a slave-holder, Jackson was a firm advocate of the federal union of the states, and declined to give any support to talk of secession.

Jackson was a lean figure standing at 6 feet, 1 inch (1.85 m) tall, and weighing between 130 and 140 pounds (64 kg) on average. Jackson also had an unruly shock of red hair, which had completely grayed by the time he became president at age 61. He had penetrating deep blue eyes. Jackson was one of the more sickly presidents, suffering from chronic headaches, abdominal pains, and a hacking cough, caused by a musket ball in his lung which was never removed, that often brought up blood and sometimes even made his whole body shake. After retiring to Nashville, he enjoyed eight years of retirement and died at The Hermitage on June 8, 1845 at the age of 78, of chronic tuberculosis, "dropsy" and heart failure.

Martin Sheen? Ugh! I doubt if I could have lasted even 20 minutes, Benning! Martin Sheen absolutely gives me the creeps.

PBS has become very liberal and I don't watch it much anymore. I probably do miss some really good documentaries because of that, but one never knows what one is going to be subjected to. I feel I'm better off actually reading a book by a historian who sticks to the facts and doesn't slant their point of view politically, although I admit that those are hard to find.

I decided NOT to watch it last night because I was sure it would be a wreck. Ugh.

Jackson did create a lot of problems. As I understand it, a lot of the problems we had with the Indian Nations were badly aggravated by him.

Shoprat: I'd agree. Dunno as I'd categorize him as a scumbag (Camo's entitled to his opinion) but he caused more harm tan needed. His loathing of Indians was part of his odd mental make-up.

Camo: I can't argue with an Injun. Jackson did wrong by them.