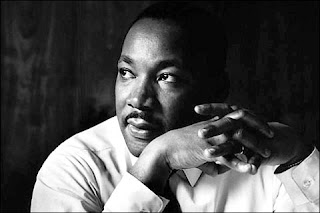 Nearly 40 years ago Martin Luther King, Jr, Pastor and one of the acclaimed leaders of the Modern American Civil Rights Movement, was assassinated in Memphis, Tennessee. His murder brought to a close the most focused, dedicated, and non-violent chapters of the quest to grant to Black Americans the very rights that White Americans had held since the first setting foot on the continent of North America. With his passing went a unified voice - if there ever was such a thing - to speak to the entrenched bigots and racists of the United States, and opened the door for the violent, the self-seeking, the deluded and self-destructive elements of America to come to the fore.

Say what you will of the Reverend King as a man, a husband, a Christian, his main focus never strayed far from the main goal: Equal Rights for Black Americans. Those who sought, and still seek, to place King on a pedestal lose sight of the facts every bit as much as those who would attempt to drag his memory through the mud of his own humanity. He was not a Saint in the Catholic sense any more than we are, nor was he a demon. He was a man. As such he had faults, frailties, weaknesses. As do we all. Yet withal he endured imprisonment, threats, degradation, contempt, constant demands on his time and purse, and the soul-deadening treatment of Americans who dismissed him for the color of his skin.

His actions led inexorably to President Johnson pushing the Civil Rights Act of 1964 through a reluctant Congress - Republicans gave it more support than Democrats, don't forget - allowing King to see a day ahead when his skin color would count for nothing. Had he not been murdered no one can say how much more he might have accomplished. And he accomplished much in his life.

We celebrate his birthday today in recognition of what he did, not what those who came after have done. Some who quibble with his speaking style lose sight of the fact that he was in fact a preacher. He spoke publicly as he would from the pulpit. His words had a certain poetic power as well as a deep imagery that conveyed more than words alone. When he spoke at the Washington Mall, August 28th, 1963 - "I Have A Dream" - he was speaking to all of America, not just to Black Americans. His message of Equality of Opportunity was universal. And just. 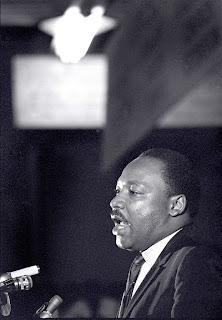 When he spoke to his admirers at the Mason Temple in Memphis, TN, on April 3rd, 1968, he was tired, over-worked, and perhaps feeling his own mortality. Yet he spoke powerfully, poetically, with the fervor of the pastor. And his words at the end of his talk seemed prescient as well as thankful:

Well, I don't know what will happen now. We've got some difficult days ahead. But it doesn't matter with me now. Because I've been to the mountaintop. And I don't mind. Like anybody, I would like to live a long life. Longevity has its place. But I'm not concerned about that now. I just want to do God's will. And He's allowed me to go up to the mountain. And I've looked over. And I've seen the promised land. I may not get there with you. But I want you to know tonight, that we, as a people, will get to the promised land. And I'm happy, tonight. I'm not worried about anything. I'm not fearing any man. Mine eyes have seen the glory of the coming of the Lord!

The next day he was murdered by an insignificant man who had done nothing with his own life. 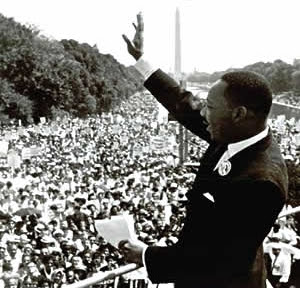 [...]
Let us not wallow in the valley of despair, I say to you today, my friends.
And so even though we face the difficulties of today and tomorrow, I still have a dream. It is a dream deeply rooted in the American dream.

I have a dream that one day this nation will rise up and live out the true meaning of its creed: "We hold these truths to be self-evident, that all men are created equal."

I have a dream that my four little children will one day live in a nation where they will not be judged by the color of their skin but by the content of their character.

I have a dream today!

I have a dream that one day, down in Alabama, with its vicious racists, with its governor having his lips dripping with the words of "interposition" and "nullification" -- one day right there in Alabama little black boys and black girls will be able to join hands with little white boys and white girls as sisters and brothers.

I have a dream today!

I made a Dr. Martin Luther King Jr. Day video that I think EVERYONE will enjoy. It’s really short, and should put a smile on your face.

great work as always Benning and he was a Conservative to boot!..:)

I'm here a bit late, sorry, but I'm glad I got here in time to read this most exellent piece. Thank you, Benning.

I especially liked the line "The next day he was murdered by an insignificant man who had done nothing with his own life." That's always the case. Martin L. King will be remembered forever. I can't even remember the name of the fool who killed him!

Angel: I dunno 'bout no Conservative! But hisideas of equality were definitely in line with conservative First Principles. :D

Gayle: I remember the murderer's name, but why mention it? Great ideas transcend their originators and last forever. King's ideas won't die, thankfully.