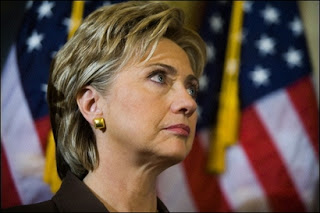 You have to see this video. It's a must! If you don't you will regret it forver!

The blurb below the video reads:

Kind of a bizarre moment in Waterloo, IA. After a very presidential-looking news conference with reporters, Clinton stood in front of a dark blue curtain with four flags standing behind her. After answering questions - a Clinton staffer opened the curtains to escort the Senator away. One flag fell and the rest followed. Chaos ensued while Clinton, her chief of staff and advance members attempted to grab all of the flags that were falling.

Eery, yes, but hilarious as hell! A must see!
Posted by benning at 3:03 PM

A premonition due to go down in history if Hitlery wins.

Can you blame them?

Nope! I'm with them!