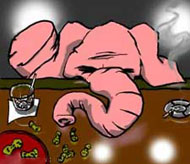 The morning after. The Democrats are celebrating, as they have taken over the U.S.House, and the Republicans are suffering the hangover that comes with a loss. Here in Florida there has been no real change. We hold on to the Governor's Mansion with Charlie Christ winning over U.S. Representative Jim Davis. A few of the races will get recounts. But here the status quo wins.

And even that was not a fait accompli. Considering how the Republican Party distanced itself from the Republican candidate for the U.S. Senate seat held by Bill Nelson, I have to wonder if Katherine Harris could have won. The Party tried to convince her to pull out of the race during the Republican Primary. The Party's choice? William "Bill" McBride. A complete unknown in the state of Florida. Indeed, the name Bill McBride was not associated with the Republicans but with the Democrats failed Governor's race of 2002. That Bill McBride was a Liberal creature of the Teachers' Unions and the left-wing of the Democrats. How wise is it to choose a candidate whose name is the same as a failed candidate from the opposition party?

Yet, that's exactly what the Republican Party of Florida did. Why? Because they decided that Katherine Harris was "damaged goods", one who could not win a statewide election because of the 2000 election recount horror. Her crime then? To follow the Constitution of the state of Florida. The state Republican Party turned its collective back on Harris because the media played her up as dishonest, as a political hack, as "unelectable".

In short, the Republican Party here in Florida cut its own throat.

How did the Republicans fare in the rest of the U.S? Not well. Better than the MSM expected, but that means nothing when you consider what the Libs will do with Nancy Pelosi now taking over the office of Speaker of the House. House committees will be taken over by partisan Democrats so Liberal, so Leftist, that they could never win an election on the national stage. If you thought we had gridlock before, my friends, you ain't seen nothin' yet! The MSM will play this up as a huge win for the Democrats. Don't believe it. What happened yesterday was nothing historical. It was the norm for the mid-term elections during a two-term Presidency.

Now we take a collective gulp of air as we begin to swing into the 2008 Presidential Election Campaign. Will the American Electorate come to its senses? Or will they stick their heads in the sand, again, and ignore the real dangers that exist out there? I hope they wake up and smell the coffee. Appeasement is no longer a choice we can make on the world stage. Democrats think it is. Will they wake up? We'll have to wait and see. But something tells me they will fall farther and farther under the thrall of the extreme Left. The huge amounts of money flowing into their coffers from the rich Socialists like George Soros and Ted Turner will grow. And the quid pro quo will hurt America.

Does America survive this slide into "navel-gazing" and ennui? I don't know. But I won't give up. I refuse to dive into the shallow end of "single-issue" politics as so many seem content to do. Do I support John McCain as a Presidential candidate for the Republican Party? Nope. But guess what? If he runs, and wins the primaries, I will support him to the hilt. Because he won't be Hillary, or Al, or John sKerry. I have problems with the stated positions of many Republican hopefuls. But I will not sit out the next elections because of some single issue with which I have problems. That way lies suicide.

So, all of you disgusted Conservatives who are moaning with the pain of this morning's election hangover, it's time to "Cowboy up"! Pop a few aspirin, clean yourselves up, and get back to work!

This is the United States of America. Get busy!
Posted by benning at 8:03 AM

HI, Benning. Thank God it is raining hard and I have an "excuse" not to hunt! Exhausted is me, despite trying to convince the non-hunting folks that this is actually fun. (OK, it is, really, but I am getting worn out.)

Thanks for the political overview of yesterday's disaster and the encouragement to trod forth. Of course you are correct. I have to get beyond the incredible facts that this makes no sense, defies reality and is astonishingly dangerous.

Faith and continued perseverence... we got to have it. I appreciate your devout cheerleading and will try to dutifully step up to the plate.

One can hardly be angry; when you ignore your base, your base ignores you.

Yup.... you fall down .... you get back up ... My efforts are going to be focused on exposing MSM, along with everything else, between elections....

Wagons Ho onward and upward. Start planning for 08.
Have a blessed rest of the week.

There is nothing conservative about this cadre of inepts in the white house.... nothing. The fact that you espouse to be a God-fearing man, a conservative it does not make you.....
40% increase in the federal budget in 6 years... enough said.

DI: It rained pretty good Tuesday, which I enjoyed. Perseverance is the key. Never give up. And we need to rein in the nasty among us - don't want to look like the Kos or DU folks!

Brooke: Seems we actually got the base out to vote. The "Independents" went another way. Time to get back to the basics, I think.

ABF: Glad yer back! We missed ya!

Truth-Pain: I can't disagree with that. As I've said before, the Republicans always seemed to run things as if they had lost. And now they have. Until Republican office-holders realize that a smaller government is what most of us want, they'll be seen as scarcely different from the Democrats.

Camo: I can accept gridlock in Washington - it keeps the politicians out of mischief. Too few of them have ever read or understood the Constitution. So all their "common good" busy-bodying is curtailed. I worry about this nation's defense. That's uppermost in my book. Will the Democrats act the way they've campaigned? Will we abandon Iraq? Will we "cut and run" now?

"Gridlock" keeping the politicians out of mischief is OK by me.

And there's plenty of ink left in "Dubya's" veto pen, too...