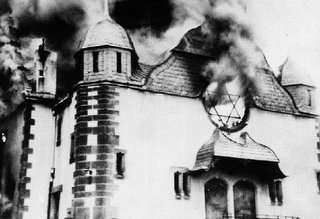 From The History Place

A massive, coordinated attack on Jews throughout the German Reich on the night of November 9, 1938, into the next day, has come to be known as Kristallnacht or The Night of Broken Glass.

The attack came after Herschel Grynszpan, a 17 year old Jew living in Paris, shot and killed a member of the German Embassy staff there in retaliation for the poor treatment his father and his family suffered at the hands of the Nazis in Germany.

On October 27, Grynszpan's family and over 15,000 other Jews, originally from Poland, had been expelled from Germany without any warning. They were forcibly transported by train in boxcars then dumped at the Polish border.

For Adolf Hitler and Propaganda Minister Joseph Goebbels, the shooting in Paris provided an opportunity to incite Germans to "rise in bloody vengeance against the Jews." 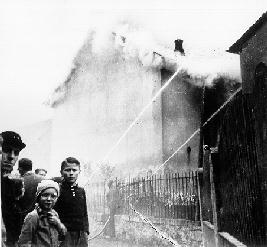 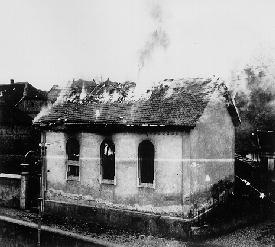 Above Left -- A synagogue burns in Ober Ramstadt during Kristallnacht. Right -- Onlookers watch as the local fire department prevents the fire from spreading to nearby houses, but makes no attempt to stop the synagogue from burning. 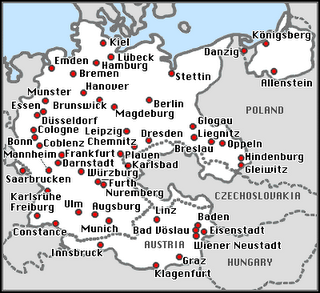 From: A Teacher's Guide To The Holocaust
Legend: Cities where synagogues were destroyed.

Nearly 200 synagogues were set afire on November 9, 1938, in an officially orchestrated evening of widespread violence and vandalism of Jewish property. In addition to the burning of synagogues, Jewish businesses and shops were severely vandalized throughout Germany. Josef Goebbels, the propaganda minister under Adolf Hitler, masterminded this Night of Broken Glass.

Again, from The History Place:

On November 9, mob violence broke out as the regular German police stood by and crowds of spectators watched. Nazi storm troopers along with members of the SS and Hitler Youth beat and murdered Jews, broke into and wrecked Jewish homes, and brutalized Jewish women and children.

All over Germany, Austria and other Nazi controlled areas, Jewish shops and department stores had their windows smashed and contents destroyed. Synagogues were especially targeted for vandalism, including desecration of sacred Torah scrolls. Hundreds of synagogues were systematically burned while local fire departments stood by or simply prevented the fire from spreading to surrounding buildings.

About 25,000 Jewish men were rounded up and later sent to concentration camps where they were often brutalized by SS guards and in some cases randomly chosen to be beaten to death.

The reaction outside Germany to Kristallnacht was shock and outrage, creating a storm of negative publicity in newspapers and among radio commentators that served to isolate Hitler's Germany from the civilized nations and weaken any pro-Nazi sentiments in those countries. Shortly after Kristallnacht, the United States recalled its ambassador permanently.

In Germany, on November 12, top Nazis, including Hermann Göring and Joseph Goebbels, held a meeting concerning the economic impact of the damage and to discuss further measures to be taken against the Jews. SS leader Reinhard Heydrich reported 7500 businesses destroyed, 267 synagogues burned (with 177 totally destroyed) and 91 Jews killed.

Heydrich requested new decrees barring Jews from any contact with Germans by excluding them from public transportation, schools, even hospitals, essentially forcing them into ghettos or out of the country. Goebbels said the Jews would be made to clean out the debris from burned out synagogues which would then be turned into parking lots.

At this meeting it was decided to eliminate Jews entirely from economic life in the Reich by transferring all Jewish property and enterprises to 'Aryans,' with minor compensation given to the Jews in the form of bonds.

Regarding the economic impact of the damage from Kristallnacht and the resulting massive insurance claims, Hermann Göring stated the Jews themselves would be billed for the damage and that any insurance money due to them would be confiscated by the State.

"I shall close the meeting with these words," said Göring, "German Jewry shall, as punishment for their abominable crimes, et cetera, have to make a contribution for one billion marks. That will work. The swine won't commit another murder. Incidentally, I would like to say that I would not like to be a Jew in Germany."

Never again? That has been the cry of Jews around the world following World War II, and the horrors of the Holocaust committed by the Nazis and their allies. And, for a few decades, the world agreed. That is, as long as the Jews could protect themselves. After all, if some crazy, backward Arabs took it into their heads to try to kill the Jews, what of it?

What of it, indeed. Modern Europe is once again a hotbed of anti-semitism. The governemnts stand quietly by as Muslims attack Jews in the streets, with impunity, and blame "poverty, alienation, racism, etc." for the violence. What they never admit is their own growing acceptance of anti-Jewish sentiments and acts. Never again? In Europe of the beginning of the 21st Century, the Holocaust seems consigned to the dusty history books, and the dying memories of the survivors.

In the United States, as we witness the growing acceptance of the media and the Left of anti-Christian sentiments, and outright discrimination, we are missing the growing tide of anti-Jewish feelings and actions as well. It is here, and it is growing. If we are not watchful, if we keep our silence when we witness the acts of anti-semitism, then we are no better than the mass of Ger,man people who cravenly surrendered to the barbarisms of Nazi-ism.

Speak up! Don't let the "funny" little asides from the politicians go unchallenged. Don't accept the supposed humor of the anti-Jewish "jokes" on television. Fight it, Folks! Anti-Semitism is one of the symptoms of the growth of Socialism. And it is supported by the Leftists. So remember Kristallnacht, and remember the Holocaust. And fight the infection when you see it here. Because it is a symptom of a horror we cannot afford if we are to survive. As a nation, or as a civilization.

Krystallnacht was only the beginning of an ugly barbaric period of world history. Of course anti-semitism was endemic, particularly in central/east Europe for centuries. But, it strikes me peculiar that your observation
"Anti-Semitism is one of the symptoms of the growth of Socialism. And it is supported by the Leftists"
doesn't quite square with some
aspects of the Nazi's bestial treatment of the Jews: the Nazi
Party was built on anti-socialist,
anti-left hatred. Many communist and socialist organizations of that time possessed large Jewish participation: the two major rallying points for
the Nazis were socialists and Jews
and often, therefore both. In the present day, we see many (80% Jewish vote against GWB in 2004)
Jews as still very liberal. Assuming liberal = left, it is difficult to accept that anti-semitism, which has a number of
religous, economic and racial causes, should be ascribed soley to the left.

Solely to the left? No. But increasingly, as I see it, the Left has become blase to it, and in some cases quite accepting.

As for the Nazis, They are, of course, the National Socialist Workers Party. It's common to place them on the political Right. But that's only because they were vehemently anti-Soviet. But for all that, they were, in fact, Socialist. Perhaps a particularly virulent and racist form of Socialism, but still ...

I understand the impulse to place liberalism on the political Left, but that is a symptom of modern (post-modern) liberalism, not clasic liberalism.

I think you would agree that Left and Right are rather slippery places.

"Long hair, short hair...what's the difference once the head's blown off?"

Cryptic perhaps, but I think it typifies a certain mindset...

Well said, Benning. Of course Nazism belongs on the side of all the European "-isms." Modern socialism may not be totalitarian - yet - but coerciveness is built into it and just waiting to pop out. All the European "-isms" are the opposite of the classical liberalism and freedom of the American Revolution.

Excellent post, Benning. I agree with you that the left seems to be quite accepting and tolerant of anti-semitism. I'm sure there is bigotry towards Jews on the right too, but I don't believe it's anywhere near as rampant. Bigotry is always wrong, whoever engages in it. With the left though, it's insidious. They don't come right out and announce that they hate Jews and if they were accused of it they would scream "foul" to high heaven and claim they were misunderstood.

Modern Europe is once again a hotbed of anti-semitism. The governemnts stand quietly by as Muslims attack Jews in the streets, with impunity, and blame "poverty, alienation, racism, etc." for the violence...so very true Benning..what a brilliant post..I am so blessed that u linked it!...Keep spreading the word Benning and God bless!

We live in a dangerous time; one that is on a razor's edge. We could fall either way.

Nothing could be more accurate than "never again." To think we or anyone would ever let this type of thing happen again is to be excrutiangly ignorant of reality!!!

Oooh wait, in case you didn't realize, I meant "never again in the 20th century."

The World and the Left like scapegoats. Israel is the ultimate scapegoat...I fear it will only get uglier before there is ever any possibility of it getting better. I certainly hope we won't have cause to say, "never again in the 21st century."

BTW: it has been for neither pleasure or business. I honestly needed a break and a recharge. Poor timing perhaps, but necessary. Thanks for popping by recently, I'm starting to regain my sanity and am beginning to feel a slight itch for posting again.

Last summer, I was incredulous when onc morning I awoke to see that a swastika had been painted on the house directly across the street from me. Here in this neighborhood! And not a word in the media about it, either.

Oh, some neighbors said, "Just kids, vandalizing." Even so, what does that type of vandalism tell us about the mindset of these young people?

I've noticed that lots of students today wear Che shirts. Not many are wearing swastikas--yet.

Benning, your post is an excellent one documenting horrors that have happened. The following is some documentation of horrors that are coming:

This know also, that in the last days perilous times shall come." (2Timothy 3:1)

"And the four angels were
loosed, which were prepared for an hour, and a day, and a month, and a year, for to slay the third part of men."
(Revelation 9:15)

Those two verses aren't an excuse for not fighting such things as anti-semitism and Muslim extremism simply a revelation that things will get so bad they will eventually be cataclysmic.