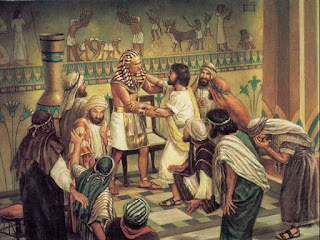 Timing is an important concept in a lot of our endeavors. In sports timing can be the difference between victory and defeat. In Art, Music, or literature timing can be important, as something may be an utter failure as Art, or Music, or Literature, simply because it is presented to the public before the public is ready for it. It's "ahead of its time," as the saying goes.

When it comes to the plans of God, our understanding of things being timely are woefully inadequate. We expect- demand - God to do things on our timetable. Why doesn't God get that? We're suffering, or in difficulties, and God is taking His sweet time answering our prayers. Though it's danged hard for us to appreciate, God has His own view of Time, and His timing is not ours. His existence is both within Time, and without. God sees the entire span of Time in terms of millennia, at the very least, and His plans are intricately laid out, and working, even as we're demanding He just do something!

Do you remember the story of Joseph? Sold into bondage by his own brothers, winds up a slave in Egypt, and eventually becomes the most powerful man in Egypt. He is reconciled with his brothers. God could easily have put Joseph into Egypt, and in that position, with speed, and ease. No pain, no fear, no suffering. But He didn't, and the tale is a powerful one for Bible readers today. It is also a nice illustration of God's plan, working His will, on His own Timeline.

Genesis 37:1-30 gives you the buildup to the amazing life of Joseph, and shows how the oldest son of Jacob - Reuben - fitted into God's Plan, and Timeline, for Joseph. And, of course, by extension, all of the Children of Israel. For even Reuben, sinful, destined to lose his Birthright, was used by God to ensure that Joseph would be spared, and that the sons of Jacob would not become murderers.

We learn that Joseph was his father's favorite, spoiled and treated openly as better than all his brothers. Jacob (Israel) thus engendered in his own sons' hearts a hatred of their own brother.


Genesis 37:3 & 4 "Now Israel loved Joseph more than all his children, because he [was] the son of his old age. Also he made him a tunic of [many] colors.
"But when his brothers saw that their father loved him more than all his brothers, they hated him and could not speak peaceably to him."

And if you read the chapter you will not be all that surprised. For Joseph is described in ways that make you wonder why he wasn't smacked around on a regular basis by his brothers. Joseph was very much a proud, boastful youngster. He had all the tact and diplomacy of a kick to the crotch. He seems to be quite proud to relate his dreams to his brothers, and his own father, in which Joseph is exalted over them all.

So picture this family, then, shepherds of sorts, who spread out over a vast territory. So vast, in fact, that it took days for them to go from one feeding area to another. Jacob was not a poor shepherd, but a rich man, for his times, and his favorite son, Joseph, was his most spoiled off-spring. And as this particular story begins, the brothers are off tending the flocks in Shechem, among other places.

Joseph may be a self-centered, self-important jerk, but he is also obedient to his father. And off he went. But by the time he reached Shechem the brothers had moved on, and Joseph had to go even farther, until he found them near Dothan. A rather long trek, and far from his father's home. And of course, he was wearing that many-colored coat, as he traveled. His brothers could see him coming from a good distance.


Genesis 37: 18-20 - 'Now when they saw him afar off, even before he came near them, they conspired against him to kill him. Then they said to one another, "Look, this dreamer is coming! "Come therefore, let us now kill him and cast him into some pit; and we shall say, 'Some wild beast has devoured him.' We shall see what will become of his dreams!"

And that would have been that, right? The brothers had blood in their eyes, so strong was their hatred of the young man. And Joseph was nowhere near home. Who would have known the difference? Certainly not Jacob.

But one brother, the oldest, the one Jewish commentators believe had the softest heart of them all, could not accept murder. Reuben - the man who would lose his birthright for an ugly sin - would stand between his brothers murderous designs, and his obnoxious younger brother, Joseph.

Genesis 37:21-24 'But Reuben heard [it], and he delivered him out of their hands, and said, "Let us not kill him." And Reuben said to them, "Shed no blood, [but] cast him into this pit which [is] in the wilderness, and do not lay a hand on him"--that he might deliver him out of their hands, and bring him back to his father. So it came to pass, when Joseph had come to his brothers, that they stripped Joseph [of] his tunic, the tunic of [many] colors that [was] on him. Then they took him and cast him into a pit. And the pit [was] empty; [there was] no water in it.

And at this point Reuben leaves. There are all sorts of reasons given, such as Reuben circling around to return and pull Joseph out of the pit, to take him home; going off to watch the flocks; having business to attend to, before he can return for Joseph. Whatever reason Reuben had for leaving, just then, he had to leave. God had His own plans for Joseph, and they did not include sending him home. Joseph was to be tempered by trial. And so God found something for Reuben to do to take him away from that pit. Timing.

So Joseph was in the bottom of a pit, Reuben was off - intending to return and save his brother a little later, perhaps after sunset - and the grumbling, murderous brothers remained. And timing rears its head, as God continues to act out His own plans.

Genesis 37:25-28 'And they sat down to eat a meal. Then they lifted their eyes and looked, and there was a company of Ishmaelites, coming from Gilead with their camels, bearing spices, balm, and myrrh, on their way to carry [them] down to Egypt.
So Judah said to his brothers, "What profit [is there] if we kill our brother and conceal his blood?
"Come and let us sell him to the Ishmaelites, and let not our hand be upon him, for he [is] our brother [and] our flesh." And his brothers listened.
Then Midianite traders passed by; so [the brothers] pulled Joseph up and lifted him out of the pit, and sold him to the Ishmaelites for twenty [shekels] of silver. And they took Joseph to Egypt.'

And here, if you can't feel for the young man, you have a very hard heart. Oh, he was going be better off, eventually. But at that moment he knew only that his own brothers hated him so much that they would sell him into slavery to be rid of him. And what of Reuben? For Reuben had intended to return and pull Joseph from that pit, and get him home to his father.

And Reuben mourned for that spoiled brother of his. He had no idea that God was moving His own plans along, and that Joseph would be fine, by and by. Poor Reuben.

Timing. God's timing is all, and we can accept that, or rail against our fates. God worked the timing so that Jacob's flocks were far from home, indeed farther away than he thought. He sent the one man to them who the brothers hated to the point of murder. So far that the Midianite caravan would not be seen by Jacob, nor Joseph recognized as Jacob's son, by those Midianites. God placed Reuben close enough to overhear his brothers plotting Joseph's murder, and stop them, and then sent him on his way so that he could not keep his brothers from selling Joseph into slavery. Timing.

We have our own concept of the timely, and God has His own. And God's timing wins. No, we don't always understand, but we are the clay to God's Potter. We don't have the standing to complain. If God decides to intercede, in answer to our prayers, He does so because it fits, or does not alter, His plans, His timing.

His plans for Joseph required a lot of things to happen at the right place, and the right time, in the proper sequence. And eventually Joseph would go on to unimagined power, in Egypt. Reuben, and his brothers, and family, would eventually be reconciled with their brother. For God's plans included Egypt, not only for the wealth and bounty of that land, but also as He ingrafted Egyptian blood into the line of the Children of Israel.

And what did Joseph think of all this, so many years later, as he looked at his brothers standing before him? In Genesis 42:22,23 we read that the brothers, not recognizing Joseph, have been thrown into prison. Joseph has not revealed himself to them.


And Reuben answered them, saying, "Did I not speak to you, saying, 'Do not sin against the boy'; and you would not listen? Therefore behold, his blood is now required of us."
But they did not know that Joseph understood [them], for he spoke to them through an interpreter.

Reuben remembered, still, and still mourned, I believe. And Joseph heard every word. Read the rest, and see how they were finally shown who Joseph was, how they feared for their lives since Joseph could have had them all executed. And then read this, as God continues to work His own plans:


Genesis 50:18 - 21 - 'Then his brothers also went and fell down before his face, and they said, "Behold, we [are] your servants." Joseph said to them, "Do not be afraid, for [am] I in the place of God? But as for you, you meant evil against me; [but] God meant it for good, in order to bring it about as [it is] this day, to save many people alive. Now therefore, do not be afraid; I will provide for you and your little ones." And he comforted them and spoke kindly to them.'

"You meant evil against me; [but] God meant it for good," Joseph says. God had surely tempered the young man; the older man had become wise.

God's plans; God's timing. All of it He has worked out from the very Beginning, and He will see it accomplished.

Deut. 11:14 That I will give you the rain of your land in his due season, the first rain and the latter rain, that thou mayest gather in thy corn, and thy wine, and thine oil.

Ecc.3:1 To every thing there is a season, and a time to every purpose under the heaven:

"To every purpose." :D Morning!

We don't have the standing to complain.

We do complain because we have an elevated view of our place in the universe. It is extraordinarily difficult for human beings to be humble.