Let There Be Light! 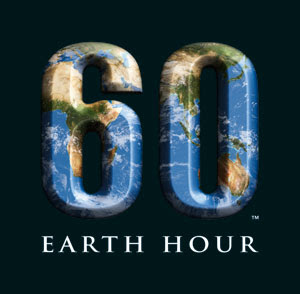 As I work in the local Wal-Mart, sweeping the floors, I scan the shelves. I do this to remind myself where the merchandise is. This is to be useful to our customers when they ask where something is. Besides, it's more interesting than simply staring at white tile for hours at a time. During my meandering, recently, I happened to hit the cereal aisle. And there on the shelf were the latest offerings from Kellogg's. Cereal boxes with ugly, bland panels down the front of the boxes announcing Earth Month.

I got news for Kellogg's: I won't be purchasing any items publicizing yet another Eco-Scam. Maybe this is good PR for your company, but I haven't fallen for the scam. But they did remind me that Earth Hour was here, and the Leftist, Capitalist-hating MSM were once again shilling for their masters. Each time one of these celebrations arises we are inundated with puff-pieces proclaiming the importance of the event, how truly compassionate the organizers are, how saintly all who observe the special moment will be.

Screw them! All of it is based on the same scam - Human-induced Global Warming/Climate Change. All of it is phony, but it sells. And it convinces the poor-thinking that they can help save Mother Earth if they just turn off their lights for an hour! Once a year! Whoo-Boy!

And you know that the elite Leftists who shill for these morons will still have their TVs going, their video-games running, their other appliances humming along. But, by cracky! if the "masses" turn off their lights off an hour, all will be well. Another canapé, my Dear?

Let's take a look at how Earth Hour has worked in the recent past, shall we? It ain't just the Eco-Moonbats in the USA that fall for this garbage. From Sri Lanka comes this Astronomy site of the Sri Lankan Astronomical Association, which reminds us of last year's Earth Hour:

Millions of people in cities across the U.S. and around the globe turned their lights off for one hour on Saturday, March 29, 2008 to make an unprecedented and highly visible global statement in support for action on climate change, energy conservation and light pollution. The World Wildlife Fund (WWF), the world's largest conservation organization, which organized and coordinated the inaugural global event reports that an estimated 36 million Americans took part in Earth Hour. According to a survey by Zogby International, approximately 16 percent of the U.S. adult population reported taking part in Earth Hour and 78 percent were aware of the event, which took place globally in more than 400 cities in 35 countries across all 7 continents. During the week leading up to the event, there were more than 6.2 million unique visitors to the www.EarthHourUS.org website.


Beyond the four official US flagship cities of Atlanta, Chicago, Phoenix and San Francisco, WWF estimates that more than 100 cities and towns across the nation took part in the event, including Miami, Denver, Honolulu, Charlotte, Minneapolis, Pittsburgh and St. Louis and many others. Iconic landmarks in the US going dark included the Golden Gate Bridge, Sears Tower, Empire State Building, Coca-Cola billboard in Times Square, Bank of America Plaza (Atlanta), US Airways Arena (Phoenix), Alcatraz and others turned off their lights to symbolize the need to take action on climate change.


World Wildlife Fund is already gearing up to bring even more people, cities, and organizations for next year's Earth Hour on March 28, 2009 from 8:30-9:30 pm during IYA. Meg Pearce, director of Earth Hour USA, convinced the worldwide Earth Hour staff that postponing Earth Hour by a half an hour during IYA would include more of the population invested in preserving dark skies. (The skies are still bright at 8pm for the population located on the western edges of timezones.) The collaboration between Earth Hour and the IYA Dark Skies Cornerstone Project is a natural connection and requires no funding. Not only does the Earth Hour program allow the public to see the dark skies from the cities, it also helps conserve energy. It will give families a chance to walk out their door to see the stars, realize how much light pollution there is, find out from the Earth Hour website how much energy and money is wasted and at the same time, spark a child's imagination. [yeah, indoctrinate them when they're still young and impressionable!]

Ahhh, yet another Eco-scam, and another one that didn't prove effective in anything but brain-washing the usual percentage of mental midgets. From Australia - 2007 - is this simple proof. 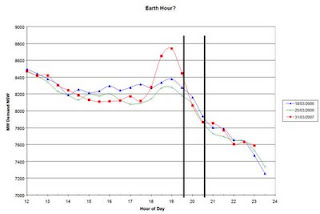 The above pictured chart demonstrates that during the "Earth Hour" itself, Sydney used around the same amount of electricity as it had the two nights of similar levels of electricity use at the same time.


However, "Earth Hour" spectacularly caused a massive spike in electricity use in the two hours preceding the "Earth Hour" revealing the whole concept to be little more than a public relations scam and a contributor to global warming. Presumably this occurred as people brought forward the electricity using activities they had wanted to avoid during "Earth Hour."

The electric consumption barely changed during Earth Hour last year, while it rose greatly for the two hours preceding Earth Hour. This is similar to a Commie waving an American Flag. Good show for the Leftist Media, and "proof" to the perpetually silly that the Commie is a loyal American and not a bloodthirsty Communist. In reality, it's all for show.

Do we really want our Nation, our world, to be as technologically-challenged, or impoverished as North Korea? In North Korea, that Worker's Paradise, Earth Hour is continual, running for decades. The ruling elite is, certainly, exempted from such mundane things. It's the people of North Korea who shiver in the cold, squint in the darkness, and starve to death under the Tyranny of Communism. The North Korean people have no choice in the matter, indeed, they have no voice. 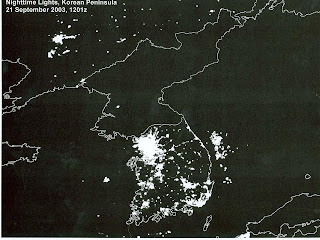 Which is what the Leftists in power in the USA would love to see happen here. So why not take a small, snarky stand against the bringers of Darkness? Before the Block Snitches report you to the OFA. Take the Red State Pledge and turn on all your lights from 8:30PM to 9:30PM tonight. "Let there be Light!" as Maggie reminds us, at The Climate Scam.

Who, indeed? Light up!
Note: Here's an astute quote from windfarms:

I want each and everyone of you that think global warming is real to go stand in front of a mirror. Now, take a good hard look. When was the last time the person you see in the mirror actually questioned, I mean really questioned what you were told to believe.

Turn off the TV, don't listen to the radio, don't read a newspaper for two weeks. Now, take those two weeks and ask yourself why you haven't asked any hard questions about the people who keep screaming global warming at you.

More on the OFA here, here, and here. Imagine the outrage had a Republican President been involved in just such a Fascist/Communist activity? Hmmph! You have a voice! Make sure it is heard!

Such a scam - just something else to inconvenience us, and to raise taxes.

I turned EVERY DAMNED THING in my house on today.

It was business as usual at "La Casa de Camo"...my rambling estate.

The left has always been big symbolic acts of stupidity.