Blue Spring Run is a pretty place. I found it while doing a morning search for "Spring" following a quick search for "Moose". How did I go from one to the other? That, Folks, is where our minds differ! Hah!

Anyway, Blue Spring Run is within the confines of Blue Spring State Park, which is in Volusia County on the east, Atlantic coast of Florida, north of Orlando. It is part of the Florida State Parks department, and one of the decent investments of taxpayer money. Nobody wants to see pavement from horizon to horizon. Not in Florida!

The spring was visited by botanist John Bartram in 1766. Later on, the park was acquired by the Florida Department of Environmental Protection (1972) to kick-start its Manatee Protection Program. 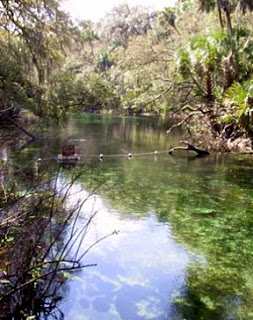 is located in Volusia County, Fla., two miles west of Orange City and adjacent to the St. Johns River. The park encompasses 2,483 acres of land with a variety of ecological habitats, including Blue Spring and Blue Spring Run. The spring and run have an estimated area of four acres and a length of 2,336 feet from the upper edge of the spring boil pool to the point of confluence with the St. Johns River.

Blue Spring is a first magnitude spring, meaning that it has a long-term average flow of at least 100 cubic feet per second (cfs) or 65 million gallons per day (mgd). Blue Spring and Blue Spring Run are classified as Class III waters by the state of Florida, meaning their designated use is for public recreation and the propagation and maintenance of healthy populations of fish and wildlife. The spring and run are also designated as “Outstanding Florida Waters” because they are located within a state park. 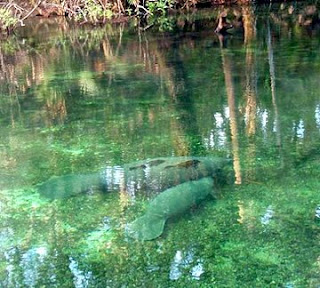 Water quality in the spring and run is characteristic of its source, the Floridan aquifer, exhibiting high water clarity, high dissolved solids, little or no oxygen, and stable temperature. The spring water remains at a nearly constant temperature of 73° Fahrenheit (°F) or 23° Celsius (°C).

Blue Spring is internationally famous as a winter, warmwater refuge for the endangered West Indian manatee (Trichechus manatus latirostris). The manatee is a tropical to subtropical species adapted to warm water that, in Florida, is at the northern edge of its geographical range. Due to their low metabolism, manatees have difficulty withstanding cold conditions and, therefore, they need to find a warmwater refuge during cold weather. Blue Spring is the only large naturally occurring manatee warmwater refuge on Florida’s east coast for the St. Johns River manatee population. The United States Fish and Wildlife Service (USFWS) has designated the spring and run as critical manatee habitat. 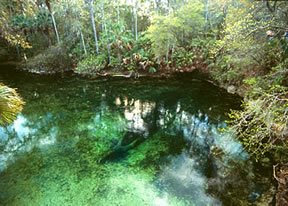 Manatees seek refuge in the warmer waters of Blue Spring Run when the temperature of the river drops below 68°F (20°C). Manatees typically begin congregating in the spring run in November and leave in March. The period between November 1 and March 31 is referred to as the “manatee season.” Manatee use of Blue Spring Run as a winter, warmwater refuge has increased dramatically since 1978, when routine manatee counts began. Based on counts performed for daily surveys, the maximum number of manatees observed on a single day has increased nearly seven-fold, from 28 in 1978 to 182 during the 2005 manatee season.

During the manatee season, manatees congregate in the spring run immediately upstream of the point where the cold, dark St. Johns River water meets the warmer, clear spring water. Where the spring water mixes with the St. Johns River, water clarity drops due to the relatively high dissolved color (tannic acid) in the river. This interface is referred to as the dark water intrusion, and is easily seen by the casual observer.

It's kind of funny, if you think about it. Manatees are doing fairly well in Florida. Partly because of official protection, but also because of places like power plants. The cleaned outflow of waste water from the plants is warm. And it attracts the manatees when the weather gets cold. They will travel quite a distance to find the power plant outflow so they can enjoy the warmth of the waters. 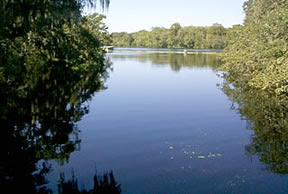 Eventually the Blue Spring Run empties into the St. John's River. So it goes from crystal clear to the brown of the river. The St, John's has a high content of tannic acid - natural, by the way! - which makes everything that sets in the water for any length of time start to turn brown.

In fact fossils discovered in the river bed tend to be a golden brown color, rather than white or gray. Yes, there is a lot of fossil digging going on in the state of Florida. Archaeology is alive and well in Florida.

I thought you might like to see some of the pretty areas of Florida. And this is certainly one of them! Have a great day!
Posted by benning at 8:28 AM

It sure looks beautiful. Are there alligators in the spring?

I don't think there's a body of water in Florida that doesn't have a gator or two. But I searched for a reference and found this, among others: "You may also see an alligator or two.

Yes, it’s true. Blue Springs State Park has signs posted up and down the water way warning visitors to watch for alligators.

In fact, the last time my family and I went we were pleased to see three very large alligators in the water - about five minutes after we had gotten out of it."


This has nice pictures, as well!

I've heard of the place...mostly due to the cave diving that goes on there.

Camo: I enjoy watching footage shot in those cave dives, but you'd never get me into one of them!

Brooke: Thanks! Been a busy time. Too bad it wasn't also remuneratively rewarding, but that's the way life goes, right?

Thanks for keeping an eye on me! :D

Beautiful pictures benning, this is only about 200 miles from me. I may have to take a weekend and go sightseeing.

granny
Sounds like a great place for me an my girlfriends to visit.