Patrick at Born Again Redneck features a Meme on his blog today, which he found at Right Wing Rebel. Rebel has tagged everyone, meaning if you want to do it, go ahead! The rules are simple:

Anyone else who wants to try, here's how it goes:

You are about to have your own band's CD cover.


1. The first article title on the page is the name of your band.

2. The last four words of the very last quote is the title of your album.

3. The third picture, no matter what it is, will be your album cover.

4. Use your graphics program of choice to throw them together.

Now Patrick tells us about what he found as his band name, album title, and picture, so I should also. Why not? It's kinda fascinating what he links show you!

My band name is Smokey Bones Barbeque and Grill, a Florida-based chain of casual dining restaurants. It is one of the newest chains under Darden Restaurants, Inc. Smokey Bones opened its first restaurant in Orlando, Florida, in 1999, and has various locations across the Eastern United States.

The album title is "Never Going To Die", which comes from a quote by Marquis de Vauvenargues - the quote is: "To achieve great things we must live as though we were never going to die."

The picture is London Bridge - titled Two Towers and an Airplane - which I kinda liked. So I stuffed them together, used Paint Shop Pro 6 for the text, and here you go, my band's Album Cover: 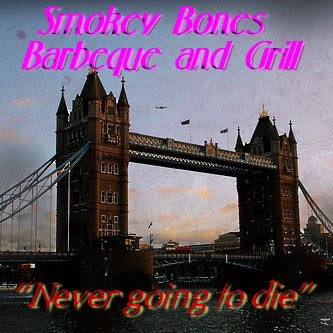 I am not currently in possession of a photoshop/graphics program. :(

I don't have a graphics program either, Benning, but it does sound like fun, and speaking of Meme's, I've awarded you "The Thinking Blogger Award." Stop by to get your sloppy kiss! :)

It IS fun! LOL

Mostly seeing what a "random" search turns up at these links. ;)