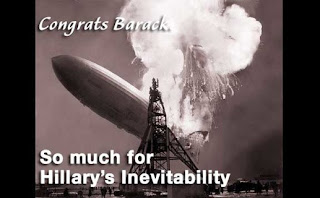 By now you all know that Barack Obama and Mick Huckabee are the big winners in the Iowa Caucuses. Huckabee's win is not a surprise; Obama's is more so, at least as far as his totals. The late night Republican returns showed Mike Huckabee at 34%, Mitt Romney nine points behind at 25% and Fred Thompson tied for third with John McCain at 13%. Obama beat Hillary Clinton 37% to 29%. Edwards was second with 30%.


From Red State comes this nice round-up of the results. Pejman Yousefzadeh writes:

Winners For The Republicans
1. Clearly Mike Huckabee. I think that he is the worst major candidate to throw into the general election, but give the man his due; with very little money and very little organization, he won in a state where money and organization matter a great deal indeed. And he won by taking Huey Long populism, rebranding it with a Republican label and selling it as the coalition of the future.
[...]
2. Fred Thompson. I know that he didn't campaign as hard as some thought he should have in Iowa. And I know that he doesn't have much money. Despite all of that, he snagged third place. He can get stronger as candidates drop out or as those who looked to Mitt Romney perhaps look again (whether Thompson will get stronger is the question). Thompson will probably look for a third place finish in New Hampshire and then look to South Carolina as well for a state in which he can do well. One thing is for sure: He's not going anywhere. He's remaining in the race.
3. John McCain. Thanks to Romney being wounded, McCain looks to New Hampshire with a lot of hope and promise. The only question, however, is whether his campaign might falter in its quest for New Hampshire independents thanks to Barack Obama's strong win in Iowa this evening.
Loser For The Republicans
1. Mitt Romney. All that money just went down the drain, didn't it? Apparently "I can look at spreadsheets with the best of them" and "I can calibrate my positions to make anyone happy" just don't go down well with the electorate, do they?

I'm not sure about the McCain analysis, but perhaps he's right. As for Romney ... who knows? He did spend a lot of money on this tiny caucus and has nothing to really show for it. But he still has a bundle of money and his campaign will continue.

Winner For The Democrats
1. Barack Obama. The only winner the Democrats had. A very impressive turnout led to a convincing victory, which led to a powerful speech. The man has loads and loads and loads of political talent and even if you disagree with his worldview (as I do), you can't deny that he is one of the most engaging and charismatic politicians out there. He goes into New Hampshire with huge momentum.

Losers For The Democrats
1. Hillary Clinton. A no-talent campaigner with no message other than "wouldn't it be cool if a former First Lady got elected as the first female President?". She can mention "change" until the cows come home--it won't alter the fact that she is the ultimate status quo candidate. [...]

2. John Edwards. How is that Huey Long Message Of Populist Anger working out? [...] It is all rage, all class warfare, all the politics of resentment. And it failed tonight. Couldn't happen to a more deserving candidate.

I think Yousefzadeh hit it pretty well, don't you? And what of the other candidates? Does anybody really care? Biden and Dodd are out of the campaign, but were they ever really in?

[...]
Another story tonight should be that Fred Thompson gets a second chance. According to the entrance polling, late deciders broke for Huckabee and Thompson. Voters who wanted to vote for someone they trusted broke for Huckabee and Thompson. Huckabee isn't going to play well across the board. Thompson, getting late breakers with his game face on, has a second chance in South Carolina.

Big loser on the GOP side: Rudy. Sure he didn't play. But damn.

On the Democratic side: Edwards and Hillary battle it out for second place. Obama sweeps it. Hillary is actually vulnerable. Good for Obama. Ironically, this pushes the Democrats to the left with their guy. Hillary actually does have more experience than Obama.

This is really phenomenal though. Not since the early eighties have the Clintons received such a drubbing by the voters. And Bill went out of his way to campaign for her. This is a repudiation of the Clinton legacy. According to entrance polling, Obama won massively against Clinton in the 65 and under crowd.

And you know what? Women backed Obama over Clinton. So how's the identity politics working for you tonight Hillary?

Lastly, goodnight pretty boy! John Edwards, who has campaigned for the job since November 8, 2004, is out.

Well, he's not really out, but man is he down! And that's a good thing.

Clinton, whose huge campaign war-chest isn’t much diminished (nor is her national machine) by the Iowa result, won’t end her bid. But now she’s an underdog, the second or third choice. She has a tough road ahead to come back. And Hillary is no Bill: the “Comeback Kid” succeeded on selling his charm. Hillary is the snake, not the charmer.

Yep. Then he continues thus:

The entrance polls -- used instead of exit polls because of the fluidity of the Democrat caucuses -- showed two important points.

First, among Republicans (most of whom identified themselves as conservatives and a great many of whom were Evangelical Christians) illegal immigration was the biggest issue. For Democrats, issues were as fuzzy as their late decision-making. Fox reported that about 51% of the Dems were most concerned with “change.”

Second, the lack of early commitment among Democrats -- not paralleled among Republicans -- shows Obama’s win to be a soft one. At about 8:15 pm last night, CNN was reporting that about 25% of Iowa caucus attendees hadn’t made up their minds before arriving at their caucus sites. A hard win -- either more than 50% of the vote, or at least a vote by committed voters -- would have meant a lot more.

Babbin also had this to say about Fred Thompson:

Thompson’s third-place finish was good but not great. After disappointing many conservatives with his slow September start, Thompson’s fast-break in the last weeks paid off. Thompson’s December 30 speech, aired on his blog and viewed by large numbers in the days since, hit solid notes that other Republicans hadn’t. Iowans apparently took Thompson more seriously than the media did, and it paid off. But the fact that Thompson tied with McCain -- whose campaign in Iowa was almost nonexistent -- doesn’t mean the Iowa result catapults Thompson into real contention in New Hampshire.

Alright, it's time for Fred Thompson to swing into full campaign mode. Hear me, Fred? Laid back is all well and good, but the voters need to know that you are, in fact, interested in winning. So get moving! We called you to run, we want you to win, but you actually have to work to get the voters to vote for you. You're not just in Tennessee anymore.

I think you're pretty spot-on with your picks, except that I wouldn't count Romney out just yet.

If not extremely verbose, you're a master of copy/paste.(lol) I choose verbosity because you're a writer. (I'll be contacting you later for an autographed copy of your book!!)

Frankly, I enjoyed the experience of the Iowa Caucuses. I learned a LOT! I'm looking forward to the New Hampshire Primaries...

Brooke: I won't count him out either. It's still very early.

In_spired: And a Happy New Year to you, too! I can be verbose as anybody - just get more than two beers into me! - but I copy and paste like a demon. Why try to better what's already been written?

For the Donks "voting for change" means "get rid of Bush" which is a wasted vote because he's not on the ballot.