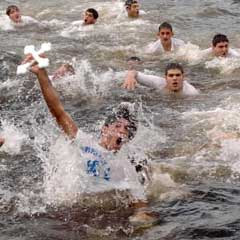 My Folks live in Tarpon Springs, Florida, about 24 miles north of me here in Largo. They have learned quite a bit about the culture of the little town on the coast, and enjoy much of it. Church-goers, they are not a part of the Greek Orthodox Christianity that is the majority religion of the town. But they heard about the celebrations of that church and the festivals, and each year see the decorations and whatnot that accompany each. And they told me all about them. I visit them as often as I can - though I tend to laze about at home rather than fight the ugly traffic that tends to crawl along (this is, after all, a very old driving population, hereabouts. They tend to drive very slowly!) - and have enjoyed the sights and sounds of Tarpon Springs. Though I'd probably enjoy the Epiphany Celebrations I never go. You see, the small town of Tarpon Springs, home to the largest Greek-American population in the United States, swells to three times the normal population, when Epiphany rolls around. Greek-Americans from around the nation come to Tarpon Springs for Epiphany each year. 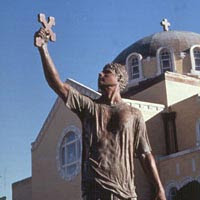 In Tarpon Springs, Epiphany on January 6 is truly a celebration of life in this unique community on the Gulf of Mexico. Schools close so that students can join family, friends, and as many as 25,000 visitors at an array of events. This day-long Greek Orthodox celebration includes a morning service at St. Nicholas Cathedral, the release of a white dove of peace, the ritual dive in Spring Bayou for a cross, followed by Greek foods, music, and dancing.

What is Epiphany, that it draws so many people to Tarpon Springs? Well, Wiki describes it thus:

Epiphany, meaning 'appearance' or 'manifestation', is a Christian feast intended to celebrate the "shining forth" or revelation of God to mankind in human form, in the person of Jesus. Some Christians commemorate the visitation of the Magi to the child Jesus on this day, while others use the day to commemorate the baptism of Jesus as an adult. It is also called Theophany, especially by those commemorating Christ's baptism.

Though Christmas is a big deal for the town, Epiphany is the larger festival, celebration, feast of the season. It's a very big deal. Last year - 2006 - marked the Centennial of the Tarpon Springs Epiphany celebration. Such is the fame within the Greek Orthodoxy of this town's celebration that the head of the Greek Orthodox Church - - came to the town to join in the festival. Wiki remarks: 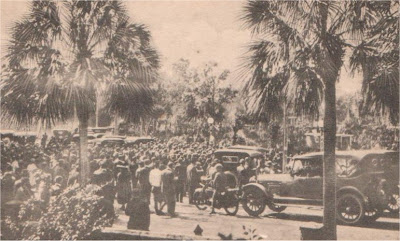 Epiphany in Tarpon Springs in 1921. 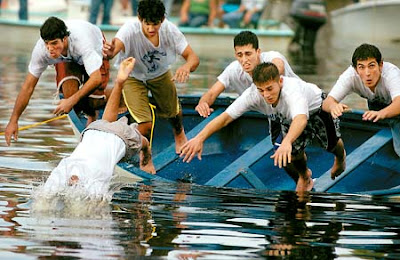 A St. Petersburg Time photo of the boys diving for the Cross.

The big public part of this festival is The Dive For The Cross. This is what tourists gather to see, along with the Greek community. Local Legacies describes it nicely:

Greek-American male youths have braved the chilly January waters of Spring Bayou since 1920 in hopes of capturing the coveted Epiphany Cross. Although there are similar events in Greece, Epiphany observances in Tarpon Springs have exceeded the fame of all others. One reason is the fortuitous location of the church near Spring Bayou. Epiphany commemorates the baptism of Jesus in the River Jordan, when the Holy Spirit descended upon him in the form of a dove. The day begins with a Divine Liturgy, then a liturgy procession makes its way to the bayou. After the archbishop blesses the waters, praying for calm seas and the safety of sailors, he casts a white cross into the waters, and a young woman releases a dove. 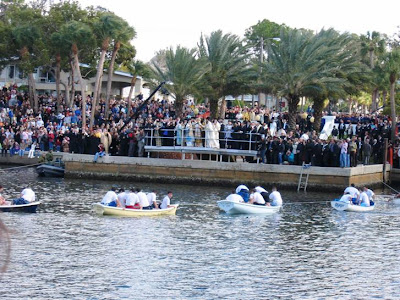 Boats are anchored in a semi-circle facing the dock. The boys swim out to the boats, climb in, and wait for the Cross to be thrown.

The dive for the cross is the highlight of the Epiphany events. Locals believe that retrieving the cross will ensure a year of good luck and blessing. About fifty boys, between ages 16 and 18, dive. Each Epiphany cross is made from a single piece of wood. Local teacher Bill Paskalaks has made the crosses for decades. When a young man finds the cross, he is greeted with wild cheers of delight and the procession carries him back to the church, where a short service is held to bless the diver. A celebration is then held in the park nearby.

The waters are extremely cold, but the young lads brave it to find that cross. Considering some of the weather around this time, in recent years, it's amazing the boys haven't succumbed to hypothermia. We're talking coooold water!

Swimming out to the boats.

Sometimes boats overturn. All part of the Dive.

And in they go, diving for the Cross! 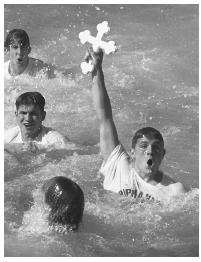 This is the winner from a few years ago.

It usually doesn't take long for one boy to find the cross on the floor of the Bayou. They practice diving, you see. It's that important to them and to the Greek community. Many of the previous images are borrowed from the Webshots album of gcoop. They are part of the Epiphany 2004 album and you can find it here. Many, many more images to enjoy!

As I said, I don't attend, as I don't care for huge crowds nor the long, slow drive north. But if you are ever in the area at the beginning of the year I suggest you head for Tarpon Springs for the Dive For The Cross. Then feel free to explore the Docks and all that Tarpon Springs has to offer. Yes, they have touristy places along the docks, but so what? Imagine seeing the Sponge Ships and the Greek Bakeries (Ohhh, man! The aromas! Wow!), visit the restaurants and museums, see the turn-of-the-century homes along the bayous. It's beautiful. Just remember to wear comfy shoes and bring a sweater!

Ah, yes...the Twelfth Day of Christmas. I leave my tree up and play Christmas tunes 'til then.

And now the day has arrived...

So that means you start packing it all away until next Christmas. *sigh*

Lasts too long/over too soon.

On to Valentine's Day!

This year it seems it started earlier and I just wasn't up to dealing with it. Since I grew up with a lot of Eastern Orthodox families around my neighborhood, "The Holidays" lasted until Epiphany. This year, though, I couldn't wait because it just seemed to d r a g o n...

I learned something new. I had no idea about the Greek community in Tarpon Springs.

Patrick: It's interesting to tour the docks. You hear Greek - may of the folks immigrated from Greece - spoken by many, hear the accented English, and watch the sponge boats heading out to find sponges. Big sponge market there, lots of restaurants where you can even find Retsina, if you have the taste for it.

'Course once you leave the downtown you move into the Victorian sections that ring Spring Bayou. Beautiful houses - mansions! - from a lost time.

Fascinating stuff Benning..wooohoo..thanks for the effort u put into these posts!

Angel: You gotta see it. Faith may be dying in many places, but the Greek-American community is active in it, and this is one of the evidences!

Thanks for posting this!