Some of you may be wondering just where the hell, or what the hell, Dixville Notch is. You know it's in New Hampshire. You know its voting begins at midnight - making it among the first places to cast ballots in New Hampshire each election - along with other places like Hart's Location (cute name, huh?) - but what about it, huh?

Well, here ya go! I did the surfing so you don't have to. But go ahead anyway. You know you want to! Now Dixville Notch used to be considered a solid Republican place. It cast 8 of 9 votes for Barry Goldwater in 1964, 17 for Ronald Reagan against 3 for Jimmy Carter in 1980, 29 of 30 for Reagan in 1984, 15 for George H.W.Bush against 2 for Bill Clinton in 1992, and twice - overwhelmingly - for George W. Bush in 2000 and 2004. But times have changed. Democrats now outnumber the Republicans in Dixville Notch - probably in all of New Hampshire - and the outcome may well show it.

So, this morning's totals for the New Hampshire Primary are:

Hillary Clinton must be weeping again, don'cha think? And I wish they'd pulled the lever for Fred Thompson rather than Mitt or Rudy, but McCain was a shoo-in, really. 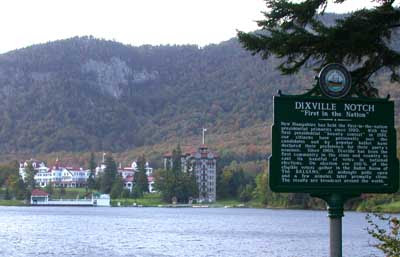 I checked Wikipedia - this isn't political, so who would mess with this entry, eh?And Wiki begins:

Dixville Notch is an unincorporated small village in the Dixville township of Coos County, New Hampshire. The town is known for being one of the first places to declare its results for the New Hampshire Presidential primary and U.S. Presidential elections. It is located in the far north of the state, approximately 20 miles (30 km) from Canada, population approximately 75.

The village is named for the mountain pass (or "notch," in White Mountains terminology) about a hundred feet (30 m) uphill from it, that lies between Dixville Peak and Sanguinary Mountain, and separates the Connecticut River's watershed from that of the Androscoggin. Dixville Notch is also the location, in dramatic mountains about 1800 feet above sea level, of The Balsams Grand Resort Hotel; one of a handful of surviving New Hampshire grand hotels ....

That's the short info on Dixville Notch. Being me I wanted to know more than that. I wanted pictures, too! So I went surfing. I have my coffee so I am ready to go. You, too? 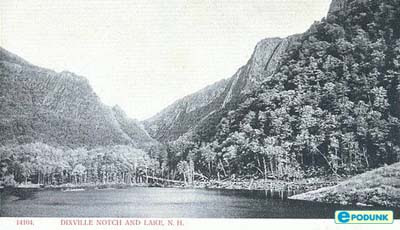 The community was named after a Col. Timothy Dix and his son, Timothy Dix Jr., who purchased almost 30,000 acres for development (around 1807). It sits at 1,877 feet above sea-level. Dix was a Revolutionary War veteran, and died in the War of 1812, leaving his business affairs to his partner and attorney, Daniel Webster. Webster sponsoed the village's first family , the Whittemores. These folks would share home and hearth with travelers heading up the old Coos Trail into the White Mountains. Eventually a local innkeeper - George Parsons - would build a 25-room Summer inn which he name the Dix House after the founder of Dixville Notch, and its fist landowner. The Dix House was built shortly after the close of the Civil War.

(The Coos Trail was built in 1803, from Colebrook through Dixville Notch and along the ancient trail of the Abenaki Indians to Errol. In Errol, the trail met the Coos Road of Maine, completed in 1802. * )

Aside from the early election times and the Historic Balsams Grand Resort Hotel - what a mouthful! - there isn't much to say about Dixville Notch. So what about the voting oddity? Wiki again:

[...] Although most New Hampshire polling stations open around sunrise and close in the early evening, Dixville Notch takes advantage of a state law that allows a precinct to close if all registered voters in that precinct have cast ballots. Consequently, all registered voters in Dixville Notch gather and are counted before the balloting takes place. The "Ballot Room" of the Balsams Hotel resort serves as the polling place; this room features separate voting booths for each citizen. The town residents also vote each cycle at a town meeting whether or not they will continue the tradition. The tradition was first organized by prominent Dixville Notch resident Neil Tillotson (1898 - 17 October, 2001 ), who was traditionally the first voter; he would reportedly hold his ballot over the ballot box while watching his wristwatch. At the moment of midnight, Tillotson would drop the ballot into the ballot box and the rest of the town's residents would follow suit. Since Tillotson's death from pneumonia in 2001 at the age of 102, the first voter has been chosen by random ballot beforehand.

In the most recent presidential election of November 2nd, 2004 the village had 26 registered voters, roughly half of whom are registered Republican; the other half are registered "undeclared", i.e., unaffiliated with a party. New Hampshire law, though, allows a voter to declare or change a party affiliation upon arriving at the polling place, so a number of independent voters vote in the Democratic party primary. 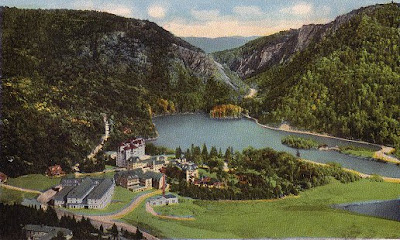 The Balsams and Lake Gloriette, View from Mt. Abenaki, ca. 1923
The votes are counted immediately after all are received; the Dixville Notch results of the primary (and now the Hart's Location ones as well) often lead morning news programs on election day. During every election year since 1968, the candidate with the plurality of Dixville Notch's voters has been the eventual Republican nominee for president. On the Democratic side, however, the village's election results have less often predicted the nominee. In 2000, for example, Bill Bradley won the most votes among Dixville Notch's Democratic primary voters although Al Gore was the party's eventual nominee. 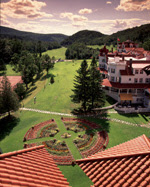 The voters head to the Hotel to vote. About that, Wiki says:

The Balsams Grand Resort Hotel is a ski resort located in Dixville Notch in New Hampshire. It was first opened after the Civil War. The hotel covers 15,000 acres (61 km²) and features 95 kilometers of cross-country ski trails, an alpine ski area with 16 trails, five glade areas and a terrain park. There is also a 9-hole golf course and an 18-hole championship course called "Panorama" which was designed by Donald Ross.

The "Ballot Room" of the Balsams is where the Dixville Notch's presidential primary votes are cast just after midnight on the day of the New Hampshire primaries. Dixville Notch's votes are among the first to be cast, counted, and reported nationally. 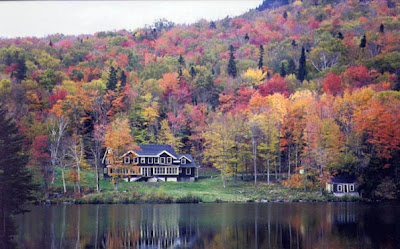 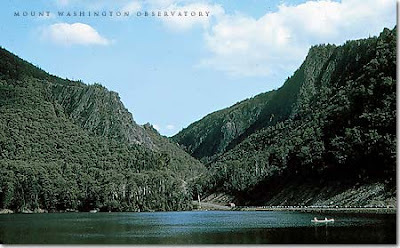 So now you know. And you are better for knowing, right? Oh, well.

Thanks for the info!

That Hillary fake-cry video was a riot, huh?

Sad, really. This is the entire aim of her life. She just may be seeing it crumble to dust before her eyes.

And to try and play on the voters' emotions is very cynical. And that's the Clinton Way.

You have a very Cool blog benning, I really enjoyed reading it.
And your pictures are *almost* as good as mine.

It sure is a beautiful place. I didn't even know that there was another Coos County in the US. I live in Coos County which was named after the local aborigines.

Idyllic little hamlet for sure, thanks for the research, looks like a great place for a fall vacation when the leaves are in full color.