Another Blogroll? Well, Why Not? Mitt's The Man! 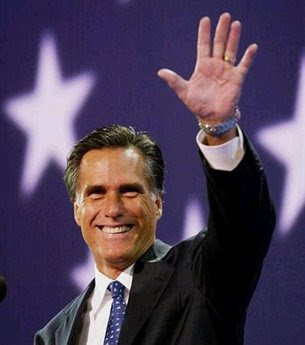 I've been ill for a few days now. Flu, probably. It left me wrapped around a toilet bowl most of Tuesday night into Wednesday morning. I managed to sleep for maybe three hours, then awoke to find myself weak as a kitten, sore at every joint, and with my ribs feeling like they'd had a going over by a gang of rabid feminists. Not a way to spend a few days off, but I'm a bit better now. *crossing fingers*

That said ... Fred's gone. He quit and we have to move on. Yeah, yeah, you already knew that. I'm not removing my Run, Fred, Run! blogroll. Why? Because I met some fine bloggers that way. If they want to remove the blogroll from their blogs, that's up to them.

However, I decided I may as well begin a new blogroll. I'm in agreement with a lot of my blogging friends: I've switched to Mitt. Mitt Romney was not my first choice. But I think he'll do in a pinch, and he was my choice - had Fred continued and taken the Republican nomination - as a the Vice-Presidential selection. So he's my logical choice for the top spot with Fred Thompson out.

For a well-thought-out post on why Romney's a good choice for the Republican nominee, I suggest you check out Patrick's post at Born Again Redneck, "Romney for President and leader of the free world". In that post was this naughty gem:

'Because Mitt, like the Bushes, is a very wealthy man and understands the global market and can look the billionaire Saudi "princes" straight in the eye as a financial equal and not be awed by their wealth. Romney will be able to speak to the smarmy Europeans nicely without punching them out as Fred may well have done.

Mrs Romney, having been the wife of a billionaire for nearly 40 years, will also be able to stand up to the plutocratic crooks who run OPEC. Oh, she will smile and say nice things but her eyes will say to them: "Back down, you primitive savage. You're in the presence of a free (and stinking rich) American woman." That's the kind of language that savages understand.'

I do have reservations about Romney, but not nearly as many as I do with McCain or Giuliani, and let's not even think about Huckabee. Ron Paul is simply out of the question. Any question!

So to show my support I have created a small blogroll, which you can see on my left sidebar. It's called "Mitt's The Man! 2008!" and you can join it by pasting the code into your own blog and letting me know you have. Just add a comment to any post, even this one! I made some images to use, based on the one at the top of this post. They are 150, 200, and 250 pixels in width. Don't like the images? Use your own. The point isn't the picture but the support.

Here's the code for your use:

The images you should save to your computer then upload to your own blog. Don't try to link them here. 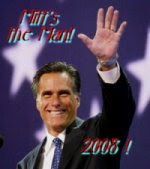 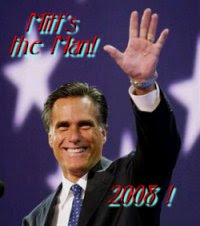 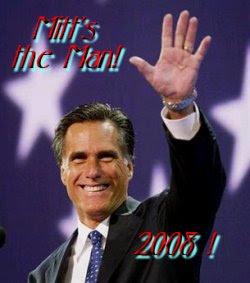 If you have switched to Mitt Romney, or are thinking about it, and haven't joined a Romney blogroll, why not join this one? Have a great weekend!

As long as it isn't Paul I will vote for whoever comes out of this mess on the basis of "the lesser of two evils."

I think you're right, Shoprat. But I do have my "druthers".

I sure hope we get a strong leader Benning!!!

I wondered where you were, Benning. I'm glad you're feeling better. Thanks for the mention. I'm not sure about a new blogroll. There are lots of Mitt blogrolls already which I haven't added because every time you add a blogroll, it slows down the page download.

There are a few that I am going to delete because it's the same people linking back to each other over and over again but I'm keeping the Fred ones because his campaign was a unique phenomenon which built support mostly through bloggers.

Yes, Mitt Romney is my first choice among the remaining Republican contenders. I'll just have to wait and see who gets the Party nod now, though...

I'm glad you're feeling better, Benning. That flu is nasty stuff, but what does not kill us makes us more germ resistant.

I agree with you about Romney.

Romney was my second pick after Fred, and in a pinch I could even do with Guliani; never McCain, though!

Issues aside, the one thing I do enjoy about Mitt is his quick wit.

As long as it's not Rudy! Do you agree with that?

BTW, thanks for the Mitt pic; I stole it!

Batya: I started a "Stop Rudy Now!" blogroll in November. That should tell you waht I think of Mr. Giuliani.

Brooke: I hope Romney takes the nomination. But we need to be prepared if he doesn't take it.

Camo: ust got back from voting in the Florida Primary. All I can do now is wait and see.

I added your Mitt blogroll to my site.

I really don't want McCain. He does not represent my views, one iota.

Mitt was my choice for VP. With Thompson out, I've bumped him up to 1st place. Thanks for doing the blogroll, I've added the code to my sidebar.

dded you both. Your blogs should sow up now. Thanks!

I do love when the words just disappear, don't you? Grrr!

Anyway, to Kelly and Chas: You've both been added to the blogroll. Thanks!