Above my "Run, Fred, Run!" Blogroll I have now added a new blogroll. This is the "Stop Rudy Now!" Blogroll. If you read my previous post you know what it's all about. This particular image is the one I use for my sidebar - anything wider and all the posts slide below the sidebar. What fun, eh? - and I have four sizes for you to choose from. Just slide your cursor over each image to see what the width is in pixels. The smallest is 150. Then click on the image to go to the actual properly sized image. It isn't hard at all. 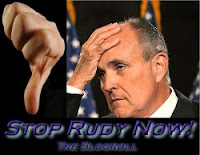 I'm not saying that I won't support Rudy Giuliani should he win the Republican nomination. I just do not agree with this idiotic idea of his "inevitability" as the nominee. There's still a lot - an awful lot! - of campaigning time remaining before the Conventions and even the primaries. Let's get the word out that we don't like Rudy and have other choices. And if we can stop him now then maybe we can recover the Republican Party from the Rockefeller wing that has slowly taken over again since the Reagan Revolution.

Remember that Reagan had pretty big coat-tails. I think if Fred Thompson can really get his message out, eluding the mealy-mouthed tendecies of campaigners, the voters may well sweep him into the White House with a Republican Congress. It's not as if the populace is enamored of the Democrat Congress. We can turn back from the Socialization of our nation. We can stop the Clinton machine from returning to the White House. We can make the Republican Party one to be proud of and one rooted in the U.S. Constitution rather than in the whims of the mob. 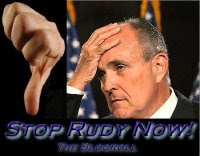 Here's the place to start, if you like! Right here! Join the "Stop Rudy Now! blogroll!

So the "Stop Rudy Now!" blogroll is now open! I hope you'll join me in it. I've made the three logos, of differing sizes that you can use on your own blog or website. Or take the big image at the top of the post and size it to your own blog needs. Just email me at benning76 at verizon dot net, and I'll add you to the roll!

Here's the code for the blogroll:

Note: Patrick, here's a picture Andy might enjoy. I found it at a Greek site here.

Very well put, Benning. Like you, I'll vote for Rudy if he's the nominee but why settle for the lesser of two evils when we can go with someone who really suits us like Fred?

I'll save the dragon pic for Andy. Thanks.

PS Where's the code for the blogroll?

And, judging by the drop off in visitors since I announced my stop Rudy campaign last week, be prepared for zero interest.

It seems that there aren't too many gamblers in our circle - people who've got enough faith and hope to bet on the best instead of settle for the lesser of evils.

I'm with you Benning, I'm adding the Stop Rudy image to my website this morning. I'll also order your book when I return from a family Thanksgiving trip. Go Fred!

If Shrillary or Obama win the Dem nomination, you can bet we'll all be swallowing the bitter pill of Rudy for the Presidency.

CDJ: Thanks! Let me know your URL so I can add you to the blogroll.

Brooke: We've seen this before. There always seems to be a certain amount of nose-holding come election time. I'd rather not go through it, but that's the price we pay, isn't it? Eternal vigilance, and all that.

Both parties need to seriously rethink their "inevitable candidate."

I don't think we in the GOP should be tearing at any of our candidates much less trying to stop them. I am a Mitt supporter and proud member of the GOP that will proudly support our nominee. There are things I like and dislike about all the candidates but the positives outweigh the negatives with the possible exception of Dr. Paul.
I will say that Duncan Hunter is probably the man Fred's supporters should have rallied around. You have got to give this to Rudy, he is running as Rudy, what you see is what you get and not shying from it.
Retail politics are important and Rudy and Mitt are masters at it, John is as well but lacks fuel money, Fred seems to shy away from it and that is what is hurting him. The company you keep is also important and Spencer Abraham, an open borders and islamist sympathizer bugs me bad.

The MSM would gladly accept the coronation of Rudy Giuliani at the Republican Convention, after which they will expose his "secrets" and try to destroy him in their attempt to once again place a Clinton in the White House. No thanks.

Whomever is nominated I will support but I will, by golly, try to stop Giuliani before the convention.

Ah Benning you know the MSM is going to do that who ever we nominate, why help them?

god knows how i missed this before now, but i'm joining if i can figure it out... i'm a fred girl, and i don't know that i'll support rudy if he does get the nomination. i just don't like him.

Heidianne: I fixed the code on the post and here it is for you:
<script language="javascript" type="text/javascript" src="http://rpc.blogrolling.com/display.php?r=3a420fba0b5b177eafb3f9a186a17bb8"></script>