It's Getting To Be That Time Of Year

It’s that time of year when we’ll be bombarded with Christmas music - the good, bad, and unendurable - wherever we go, the television schedules will be filled with various Christmas Specials - most of them cheap rip-offs of Dickens, etc. - and we might be lucky enough to find the few Holiday gems that we remember from days gone by. Among those gems you might watch for the umpteenth time “A Charlie Brown Christmas" with its non-PC rendering of Scripture from Linus, “White Christmas” with Danny Kaye and Bing Crosby.

Perhaps you’ll sit through “A Christmas Carol” by Charles Dickens in its many guises from the Alastair Sim as Scrooge to Bill Murray in the role in “Scrooged". My personal favorite - so shoot me! - is “Mister Magoo’s Christmas Carol", a television cartoon I’ve loved since it first aired. (“..with Razzleberry Dressing ...”). I’m also partial to “Rudolph the Red-Nosed Reindeer” with Burl Ives (“Bumbles bounce!” “I want to be a Dentist!”).

But for me the Christmas is not the same if I don’t catch Bing Crosby and Fred Astaire in “Holiday Inn” which is the film that debuted Irving Berlin’s most popular song “White Christmas”. As MCA/Universal describes the film:

"Holiday Inn has become one of the best-loved film musicals of all time for its delightful dancing, sensational story and Irving Berlin music that is simply unforgettable.

This is the film that introduced the Academy Award-winning classic 'White Christmas' into the public's consciousness. The song is the culmination of the charming story about two talented pals, one a singer (Bing Crosby) and the other a dancer (Fred Astaire) who find themselves competing for the affections of a lovely lady played by Virginia Dale. But when she dumps them both for a Texas millionaire, the two try to find other ways to occupy their time. Crosby would rather enjoy life than work, so he comes up with the idea of running a roadhouse that is open only for holidays. The joyful music that comes from this proposal includes 'Be Careful, It's My Heart' for Valentine's Day and 'Easter Parade' for Easter, of course. Dancing, singing, and humor light up the screen throughout.

One of the most memorable films ever created, Holiday Inn is as enchanting today as when it first wowed scores of happy crowds. This is a piece of Hollywood history that the family can treasure forever."

Fans of Astaire or Crosby have a lot to be thankful for in this movie. Bing’s singing is wonderful and Astaire dances to a fare-thee-well. One of the neatest dances Astaire does, seemingly on the spur of the moment, with his pockets filled with torpedoes and firecrackers. He looks so at ease as he dances around the stage blowing up the torpedoes and lighting and setting off the firecrackers - with the cigarette he’s smoking throughout the number (*gasp!* How un-PC!) - that it’s hard to believe that he filmed the dance 38 times until he was satisfied. Remember ... Astaire never allowed camera cuts during his dance scenes. They were filmed from beginning to end. So he performed this number, in part or in total, 38 times! Sheesh!

The dance number is called “Let's Say It With Firecrackers”, and perhaps it’s the only solo dance he did as memorable as the one where he dances up the walls and across the ceiling in “Royal Wedding”. The firecracker dance sequence required 3 days of rehearsal and took two days to film. Fred Astaire's shoes for the dance were auctioned off for $116,000 worth of war bonds.

You can watch the Firecracker dance by clicking on this still from the dance. 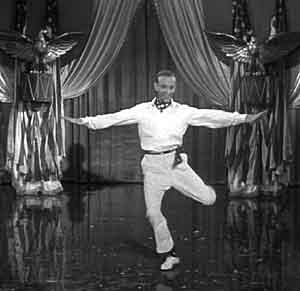 I wanted to find the video of the dance “I Can’t Tell A Lie” Astaire did for Washington’s Birthday in the film, but couldn’t find it. It’s funny as he and his partner attempt to dance while Bing Crosby changes the tempo of the number over and over again. Poor Fred ends up with his powdered wig askew. You have to watch the movie, Friends. Have to.

And if you are wanting some Fred Astaire magic right now, well, there’s this classic: "Pick Yourself Up", from the film "Swing Time". You should recognize his partner. It's Ginger Rogers. *sigh*

This is the first rendition:

And this is the second. Hmmm ... vast improvement by Fred, eh?

That was a real treat for this old codger.

Thanks for those wonderful reminders.