Following in Patrick's footsteps, and with good reason, I've removed the "Run, Rudy, Run! blogroll. I'm replacing it with a "Run, Fred, Run!" blogroll. Always a somewhat lukewarm supporter of Rudy Giuliani, I added the Rudy blogroll in support of Patrick and also because Rudy seemed the best of a lot of so-so choices. Patrick kept an eye on Rudy's perambulations and pronouncements, as well as the analysis by commentators of Rudy's history, speeches, and so on.

The more one looks at Rudy Giuliani the more one sees that his approach to government is neither the Classic Liberal - which Patrick can describe far better than I - nor a true Conservative or Libertarian. He is a Statist, which is close to the modern Democratic Party stance on governance. By supporting Public Funding of Abortion, Giuliani not only loses the support of pro-life voters, but endorses yet another theft of taxpayer monies for un-Constitutional activity.

Matters not a whit to me whether or not you support abortion rights or no, or whether you support a "woman's right to choose" or no. To allow the government, indeed to mandate that the government (That's you and I!), pay for abortions as a protection of a right is utter nonsense, and is neither moral, ethical, nor Constitutional. Our government's powers are listed in the Constitution. Paying for any person's choices is not among those powers.

I know some will say ,"Well, what good is a right if you can't pay for it?" You have a right to purchase a Cadillac, if you so desire. That's your right under the Private Property protections afforded you by the Constitution. Nowhere in there will you find a "right" to steal another's money to pay for that Cadillac. Private charities can pay, if they see fit, and private groups may choose to support with thier own money, abortion-on-demand, "free" medical care, and a host of other things.

"Well," you say, "I don't support my money paying for the military!" How did I know that? But, you see, the Constitution specifically granst the government the power to raise taxes to pay for the military. Your support is moot.

I have been pushing for a Fred Thompson Presidential run for awhile now. I like the man, who brings to the table a Law degree, experience as a US Senator, a no-nonsense attitude, a Conservative approach to government, and a presence that not one candidate, Democrat or Republican, can match. As yet, he is not running, but he has put out feelers. Can he win the Republican nomination, should he choose to run? I think so. Can he win the general election? Against Shrillary? Against Obama? Of course! Both are mainstream/left Democrats, more interested in extending the powers of the State and curtailing your Constitutional Rights.

So the "Run, Fred, Run!" blogroll is now open! I hope you'll join me in it. I've made two logos, of differing sizes that you can use on your own blog or website. Just email me at benning76 at verizon dot net, and I'll add you to the roll! 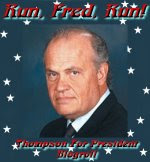 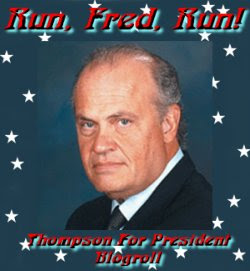 Here's the javascript:
(script language="javascript" type="text/javascript" src="http://rpc.blogrolling.com/display.php?r=6b80f21a5ab1acd3edb14d7a6e152cb5")(/script)
Don't forget to replace the parentheses with carets!
Posted by benning at 8:59 AM

Well said, Benning. I'm not sure I can describe "classical liberal" better than anyone else. To me it just means thinking, like our Founders did, that government is a necessary evil.

I'll be adding the blogroll to my side-bar next.

G'mornin Benning!..yes he sure does seem like a worthy candidate doesnt he!

I sent you an e-mail, Benning, and have put the blogroll on my blog. Thanks! :)

It doesn't matter what Fred does. I'm writing the guy in. I dig Duncan Hunter, but he's got no shot :(.

I'm thinking of becoming a Democrat so I can vote twice.

To paraphrase a joke I've heard regarding Hillary: Democrats put the sticker on one bumper, Republicans put it on t'other...

It's getting too late for Thompson. I'm disturbed by his late start. How could he possibly raise the same amount of money that McCain, Giuliani and Romney have already raised.

Plus, Thompson looks good right now. But once he's an official candidate, the liberal media will go after him just like they're now going after Rudy.

I'm sticking with Rudy. He's by far the most Libertarian candidate in the GOP field.

Plus, he's just got star power and pizzaz. Thompson comes across as a bit of a snoozer.

I'm pulling for Thompson to run as well! I'm not sure I could stomach voting for any of the other possibilities.

I would love for him to run. I am already on 2 other Fred blogrolls