and drop it into the garbage.

To top that, I saw her reach into the wet garbage bag

and fish around in there looking for a lost teaspoon.

In 1955 a milkshake machine salesman, impressed with the "fast food" concept of the McDonald's Restaurants originated by the McDonald brothers (Dick and Mac), bought a franchise in DesPlaines, Illinois (the 9th McDonald's Restaurant). Frustrated by the bothers' slow pace at expanding this concept, and believing that others would copy the system and reap the success (which they did), Ray Kroc bought the business from the McDonald's brothers in 1961. He turned it into a multi-billion dollar, International icon. Not to mention a target for the stupid, anti-business, anti-success Lefties.

The original mascot was called "Speedee" and featured a winking little chef with a hamburger face. He was replaced in 1962 with Ronald McDonald, the clown we know today, who was based on Bozo the Clown. I remember when Speedee graced the wrappers of hamburgers served at McDonald's. The official symbol of MacDonald's then became the famous arches, which used to grace each restaurant, which could also be read as an "M". The Kansas State Historical Society states:

"It's also been suggested that the business wanted to avoid a connection to another advertising character with a similar name-Speedy Alka-Seltzer-associated with indigestion. Speedy Alka-Seltzer was only a year older than the McDonald's Speedee, though, and the two had managed to co-exist for nine years."

I can also remember the small tiled buildings, with all the windows and the big arches at either side. As a kid, the aroma of french fries inside was like being in heaven! Only Arby's french fries, where I grew up, were better, and they were actually more like thick mashed potatoes extruded (Play-Doh anybody?) and dropped into the fryers. Yum! 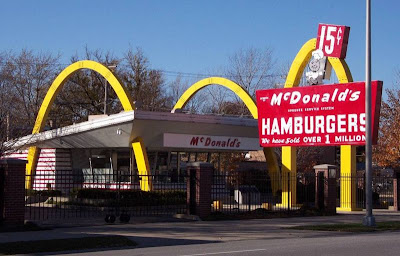 What was this "fast food" system that Kroc found so promising, along with many other restaurant chains to come? Wikipedia reports:

"The [McDonald] brothers' first food venture was a hot-dog stand in Monrovia, California called the Airdrome, opened in 1937. Using the profits generated, they closed it and opened their first restaurant, a barbecue drive-in in San Bernardino, California, in 1940.

Inspired by the assembly line of Henry Ford, in 1948 they closed their restaurant for several months, and pared service back to the essentials, offering a simple menu of hamburgers, french fries, and milkshakes, produced on a continuous basis (rather than made to order, as all restaurants had done) and with no substitutions offered. Food could thus be served nearly instantaneously -- a new idea that Dick called "fast food." The carhops were fired; customers walked to a single window to place and receive their orders. They made the food preparation area visible to the customers, to exhibit its standards of cleanliness, and they eliminated all china and cutlery, serving only in paper bags. The system worked so well because parents would drive up and send their children up to the window to place the orders, still in full sight of the parents. The employees were instructed to "Treat Every Customer with Respect" and so children were made to feel special when they ordered.

The result was the "Speedee Service System." The brothers can arguably be said to have invented the modern fast-food restaurant, although similar ideas had already been implemented at White Castle and the similar Krystal. The food was not only served quickly, to a consistent standard; it was also cheap. A McDonald's hamburger cost only 15 cents, less than half of what it might cost at a typical diner." 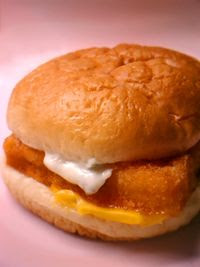 My favorite is the Filet-O-Fish Sandwich. For awhile I preferred the Burger King version - The Whaler - but McDonalds' Fish Sandwich is consistently better nowadays. All it is is a fried, breaded filet of fish, with a slice of processed American cheese, a dollop of tartar sauce, and a steamed bun. Can't beat that! Add a large fries and yer good t' go! Wikipedia says, about the Filet-O-Fish:

"The Filet-O-Fish is a fish sandwich sold by McDonald's since 1963. It was introduced by a McDonald's franchise in Cincinnati, in response to declining sales at restaurants on Fridays, due to the Catholic practice of not eating meat on Fridays at the time, and now mostly during Lent. It contains a breaded fish patty made from Pollock and/or Hoki, half a slice of processed cheese and tartar sauce, on a steamed bun. It has become popular with people who cannot eat the other meaty burgers on offer, particularly Muslims who cannot eat non-Halal meat. The fish patty size was increased 50% in 1996 during the Arch Deluxe marketing. However in 2000, in an effort to increase profitability, the fish patty was reduced in size by approximately 10%. A Double Filet-O-Fish sandwich is available in with a combo meal and as a stand alone sandwich. It contains two fish patties stacked in the same bun."

Recently it's become fashionable to denounce McDonald's, as well as all other large successful businesses, for corporate greed, and for forcing the "American Way of Life" on other nations and cultures. Attacks on the content of McDonald's food is, of course, the province of the ignorant and the stupid. Granted, if you eat nothing but Big Macs, fries, and milkshakes, you will probably become rather fat. But that is not the fault of McDonald's or any other restaurant. It's the fault of the slob shoving fattening food into his/her gaping maw. If you have troubles with trans fats, then you should probably not eat french fries, or Big Macs. Or Filet-O-Fish sandwiches either. But that's up to you!

Today marks the day that Ray Kroc opened his first McDonald's franchise way back in 1955, and took the first real step on his way to greatness. So why not celebrate with a burger and fries, eh?

We never had McDonald's up here until the early 80's. In the early days it was A & W and Burger King everywhere. The competition after McDonald's moved in was great, and the other two had to clean up their act.

Once again I learned something from my visit to your blog but I still prefer Burger King. :)

In Dayton, OH, right next to the Wright Patterson Air Force Museum, a replica of the original McDonald's exists, and still operates! It's drive-through only, but they have two lanes, and it's still cool just to drive around it!

I remember stopping by McD after church sometimes. It was one of those like the picture in your post. Just walked up to the window and ordered.