Unhappy With The Current Crop For 2008?

Debbie, at Right Truth, posted today, asking "Alan Keyes or Fred Thompson for President?" Yay! Another blogger who is asking for more than the same old retreads and media-supported choices. She has quite a few links there, and I hope you'll visit and comment. As for me, no, I would not support an Alan Keyes candidacy. I think his last foray into the elective process was an embarrassment and proved that he is not a serious candidate for any office, fine conservative thinker though he may be. No, I support the former Tennessee Senator, Fred D. Thompson. And I said so awhile ago, too! Until he actually puts his hat in the ring, I will continue to support Rudy Giuliani. But Fred is my choice!

Why Fred Dalton Thompson? Well, let's see: He's a real Conservative, with a track record in the United States Senate. He's a lawyer who graduated from Vanderbilt U. Law School with a Jurist Doctor degree. He was the campaign manager for Tennessee Senator Howard Baker's successful re-election campaign in 1972, which led to a close personal friendship with Baker, and he served as co-chief counsel to the Senate Watergate Committee in its investigation of the Watergate scandal, (1973–1974). He was responsible for Baker's asking one of the questions that is said to have led directly to the downfall of President Richard Nixon—"What did the President know, and when did he know it?" Also, Thompson's voice has become immortalized in recordings of the Watergate proceedings, asking the key question, "Mr. Butterfield, were you aware of the existence of any listening devices in the Oval Office of the President?"

How is he for tough? In 1977, Thompson took on a Tennessee Parole Board case that ultimately toppled Tennessee Governor Ray Blanton from power on charges of selling pardons. The scandal became the subject of a book and a movie titled Marie (1985) in which Thompson played himself, supposedly because the producers were unable to find a professional actor who could play him plausibly. This film launched his acting career. A lucrative career, by the way. 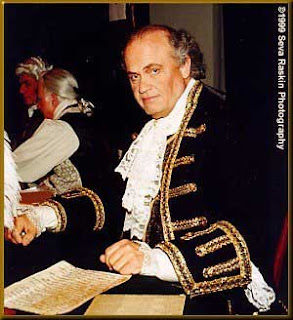 He's been acting since his final years in the Senate, and his face and voice are very familiar to Americans. And, yes, he does have a sense of humor!

He fills in for Paul Harvey sometimes, and you can find text of Fred's commentaries here. Short and to the point. They also contain links to the audio of his commentaries. So feel free to give a listen! Now, that sounds like a President, doesn't it? If you go to Fred '08 you can catch up on articles about him, read a short bio, and get involved. Also, head on over to Draft Fred Thompson! Register, and join in the forum there. I did. The banner atop this post is from that site.

Look, we all know that a lot of conservative voters are quite leery of the current crop of Republican Presidential Candidates. They don't like the stances of the front-runners, but would hate to see either Clinton or Obama win the general election in 2008. Well, with Fred Thompson they would not have to worry. He's a Reagan-style conservative with a proven track-record. He could win and win big! And he might just have the long coat-tails that would bring the conservative Republicans back into power.

Let's stop rewarding the same old Lifers who have said the same old things while bowing to the Liberal Democrats, once in office. Let's tell Fred Thompson that we want a real Conservative to run. We want him!

Wondering why all the posts today? I'm now on vacation! Yay! I don't return to work until the 16th of March! So I'm gonna read a lot, write a whole lot (I must!), and be a lazy good-for-nothing! Yay!
Posted by benning at 3:21 PM

Very informative post. I must admit that I know very little about Fred Thompson. He seems like a decent guy unlike some of the candidates of the 2008 presidential race. Some of them are inconsistent and lack the moral fiber needed to run the oval office

You're right. It's the flip-flopping that makes many of us wonder what goes on in their heads. They seem to stand for nothing other than the latest poll reults.

I hope he is going to run. go Frad go.

Agreed. Term limits all around!!!

It would be great if Fred took the bait but I wouldn't blame him if he refused - it's a lousy job.

I do not think they could make it unfortunately. The GOP has become so detach from its voter block.

As for me, I waiting until this summer when Newt Gingrich announces his candidacy.

He is brilliant-he really loves America and the American people and I believe also he will give Giuliani-who I like-but have problems with some of his beliefs and policies supporting a womans right to choose and gay rights-I think Newt can blow him out of the water, but is just my humble opine!!

You silly little Rightwing fanatic! Everyone knows an actor couldn't be president!

Darn you, BU! I have my hopes! Sheesh!

Remember, Fred was a lawyer before he was an actor! Although there ain't much difference, huh?

Layla: Newt has some integrity issues - I still remember the to-do about where he wanted to sit on Air Force One, while flying with Clinton.

Patrick: Not only a lousy job, but a thankless one, at that!

Camo: I kinda wish the electorate was smart enough to that all by themselves.

Zoom: You tell him! Welcome to the blogosphere!