I bind to myself today
The strong virtue of the Invocation of the Trinity:
I believe the Trinity in the Unity
The Creator of the Universe.

I bind to myself today
The virtue of the love of seraphim,
In the obedience of angels,
In the hope of resurrection unto reward,
In prayers of Patriarchs,
In predictions of Prophets,
In preaching of Apostles,
In faith of Confessors,
In purity of holy Virgins,
In deeds of righteous men.

I bind to myself today
The power of Heaven,
The light of the sun,
The brightness of the moon,
The splendour of fire,
The flashing of lightning,
The swiftness of wind,
The depth of sea,
The stability of earth,
The compactness of rocks.

Christ, protect me today
Against every poison, against burning,
Against drowning, against death-wound,
That I may receive abundant reward.

I bind to myself today
The strong virtue of an invocation of the Trinity,
I believe the Trinity in the Unity
The Creator of the Universe.

Ireland is, for all intents and purposes, a Roman Catholic land, an island where Christianity took early root, flourished during the Dark Ages when the rest of the Western World seemed dead or dying, and then slipped into a backwater of mystery while the rest of Europe regained its strength and power. The Church used the name of Saint Patrick as a kind of Cult of Personality to awe the native Celts, and cement its hold on the orthodoxy of its teachings. For the Irish, St. Patrick brought Christianity to Ireland, drove the snakes from Ireland, and died in the land he adopted. 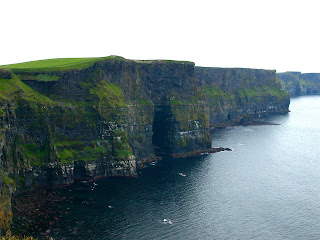 
But Christianity is a very slippery religion, my friends, one that manages to wend its way into the hearts of peoples unknown to the rest of the world. In fact, nobody knows who brought Christianity to Ireland, or even when. But Patrick was not the first, nor did he evangelize the island in the 5Th Century for Rome.

Roman Catholic writings show that Pope Celestine consecrated Palladium as the first Bishop of Ireland, to minister to “the Scots believing in Christ.” Scots being the anglicized word for the Latin Scoti, meaning Celts. This was in A.D. 431, and shows that there was already a community of believers in Ireland, as there was in Scotland, as well. St. Patrick came later, perhaps as early as A.D. 432, but probably no later than A.D. 435. (Patrick would later say that Palladium was a failure, but the people of Leinster, whom he evangelized, would disagree.)

Patrick, himself, was probably Celt, maybe Welsh, if not a Scot, but may have had a Roman father or grandfather. Nobody really knows for sure. That he was born on the western coast of the island of Britain is most certain. The rest is interesting speculation. Such is the problem with Irish history. And with the Roman Catholic Church's accepted histories.

Taken captive by Irish raiders, he was sold into slavery in the area called Dal Riata, which had colonized the western reaches of Scotland. And there, in the north of Ireland, the young man tended pigs, prayed deeply to GOD, and began to hear the voice of GOD. After 6 years servitude to a chieftain in Ulster, Patrick escaped, took ship to Britain, and made his way to Gaul (France), where he entered the priesthood. From Adherents.com:

At age 40, he had a dream in which he believed God commanded him to go back to Ireland to convert the Irish to Christianity. In 435AD, he was sent to Ireland by Pope Celestine I as a missionary (note: there were already some Christians in Ireland).

It is very possible that as time passed, the workings of Bishop Palladium, and the priest Patrick, became meshed into one person in the minds of the Irish. Patrick, being a good Celt and all, would have been the one to come to the fore in the consciousness of the people. Of his writings - and there may have been many - we know of only two that survived. "Confessio" is the one best known, and recounts his life and conversion. The other, "A letter to Coroticus", is a complaint about British attitudes toward the Irish and their church (sound familiar?), and the raiding on his converts. Other writings are attributed to him, but few can be nailed down with any certainty.

The Catholic Church ascribes to Patrick many miracles, of which driving the snakes from Ireland is perhaps the best known. But the Ice Age had already done that work, leaving Ireland free of the serpents.

Patrick is said to have brought writing to the Irish, and he probably was responsible for introducing Latin. Ogham script was long in use by then. But it was unsuited for copying and disseminating the Word to the faithful. He is believed to have founded more than 300 churches and baptized more than 120,000 persons. Quite a life's work, wouldn't you say? 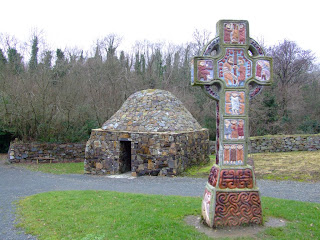 
While we celebrate the life of this Apostle to the Irish, we have lost sight of the actual man. We chug our green beer (yeesh!), wear green (and Orange!) and shamrocks, and party the day away. But we lose sight of what really happened nearly 1,600 years ago.

A man, once a slave of the Irish, returned to them as a missionary to spread the Word of GOD. He endured many hardships, risked his life, and was ultimately successful in evangelizing the people he met. He may have performed miracles, but we cannot know that. What he did do was plant a powerful Church in Ireland that would survive the Dark Ages and then send out missionaries to the rest of the world to reignite Christianity that was near death in Europe. He was a great man. And we should remember that above all. He worked for the Lord, and was, as are all believing Christians, a Saint.

Regarding Patrick's sainthood, I think this says it best:

But is that how one becomes a saint? According to the Bible, sainthood is not attained by what others think of us, but by who we own as our Saviour. At least six New Testament epistles are addressed directly “to the saints.” The authors were not writing to dead people, but to all those who believe this: “By grace you have been saved through faith, and that not of yourselves; it is the gift of God, not of works, lest anyone should boast” (Ephesians 2:8).

Patrick did not become a saint because of his good deeds in Ireland, but because of what he came to believe while still a slave boy in that country. After his salvation, he was called by God to return to Ireland, “to dwell in the midst of barbarians ... for the love of God.” He went, not to obtain salvation, but because he was already saved and wanted to share his faith out of love for his Saviour. 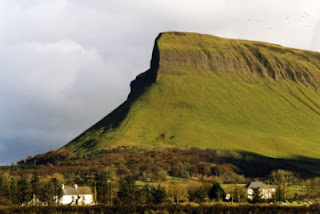 
Have a Happy and Safe St. Patrick's Day! GOD Bless!

I always learn something when I come here, benning! And the photos are gorgeous!

The wording of the 'St. Patrick's Breastplate' poem/prayer were immediately familiar. The words were put to a chant consisting of alternating tunes called St. Patrick and Diedre. This hymn is
termed a 'traditional Irish melody and can be found in the Anglican and Episcopal hymnals. The Irish and Welsh hymns showcase the typical lyrical celtic sense in both words and music.

Thanks, BB, I didn't know that at all. Can those tunes be found anywhere?

CAmo: I agree! That's one land I'd like to see.

..tunes be found anywhere?
Yes, the Anglican hymnal version has an MP3 to listen to here
http://www.sibeliusmusic.com/cgi-bin/show_score.pl?com=streammp3&scoreid=85546
..and various other sources may be found under'I bind unto myself today audio' Google search.

That's the best article I've read about St Patrick. Even I learned some new stuff about my namesake.

Thanks, BB! That was enjoyable. :D

Patrick: I learn something new everytime I go looking into a new post. I also learn new things at the blogs of my friends. Thanks.