By 1997 I had joined an online Trivia site, and met a woman who was there. She lived in Wyoming. We chatted often, after playing 'Cosmo's Conundrum' - a game no longer in existence at Uproar Games - and I fell in love with her. Mind you, without ever having laid eyes on her. So it can happen! And yes, I am quite shallow, but she was something special!

While chatting and surfing with her - nice to do with someone far away! - she sent me to a page with a short story she liked. It was "A Rose For Emily" by William Faulkner. 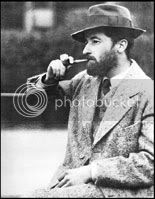 I liked the short story, but was intrigued by one of those banner ads on the page. It advertised a free writing course. Something called "F2K". Well, that sparked something, brought something to life, so I surfed over and signed up. I went through a session - 7 weeks - of F2K and liked it, and joined WVU, its parent organization. Heck, it was just for one year, so it's not like I signed my life away. Besides I had money then. *sigh* Yes, I did, then. And I was thinking, quietly, that maybe these folks would show me how to get published.


So, I joined a Study Group or two, posted parts of chapters, gave feedback to the other writers, and generally had fun. I managed to get a few short stories published - and paid for! - and started work on a few projects that I eventually abandoned. And Time, of course, passed.

My Dear Lady agreed to move down here, so I paid to first move myself - from a small one-bedroom! - bought a plane ticket to the north, and moved her on down. An expensive, love-filled adventure! And I was madly, deeply in love. Within a few months I had lost my decent-paying job, and had scrambled to find a carpet cleaning job that paid less than half what I had been making, and ate up 10+ hours a day, six days each week. It exhausted me, frankly.

By the time we experienced the Four Hurricanes in late summer of 2004, she was tired of the lack of money, and my seeming inability to look for better jobs. And she left. Much as it hurt/hurts ... I can't blame her. I told her I'd take care of her, and in the end I could barely take care of myself.

By the following April my car had been repossessed, the phone - and dial-up - had been shut off, and I was barely hanging on. Writing was just another dead dream at that point. I was now working at Wal-Mart, had saved enough to buy a bike, so I could ride to work, and was on the trail of a cheap truck. Eventually I was able, with some help, to get the phone back, and with it the Internet.

May saw me wake early one morning and go through the submission Guidelines of ePress. Well, what the heck, right? I was going nowhere, I had nothing ahead of me, so why not take the plunge again? So I pulled out the manuscript, made sure it fit the guidelines, and emailed it. I related that tale here, so I won't bore you with the story again.

After nine years, and a lot of crap in between, my manuscript began the publishing journey. Nine years! Now do you see what I meant in the previous post? Why did I want to go through that again?

I had a nice short-ish tale in the SF genre. Might make a decent novel. Might! But do I want to write something as involved as "Dune"? I just don't know. So, can I sit my arse down and do what my head tells me to do? Write down the dialogue I hear, describe the scenes I can see? Do I?

Wow! I can identify with a lot of what you have been through especially the lack of money part. I am reminded of a scene from the movie, "Josie Wales" starring Clint Eastwood. Just before the head for Mexico the Indian tells the story of how all the chiefs went to Washington D.C. and the President told them all to, "...endeavor to persevere". He finished his story with, "...then we declared war on the white man". Endeavor to persevere sound like important words but they only mean hang in there. Talk to you soon, benning.

At least you went through the process of getting your novel done. How many people write their "breakthrough" novel to only let it sit in their drawer and NEVER try to publish it.

When I was in high school (early 80's), my English teacher felt that I had the ability to be a writer. Ha, I thought. He would read my essays to the class and I would get snears from my classmates. I loved writing, but NEVER considered a writing life.

As years passed and family commitments engulfed my every waking hours, I decided one day last year to get back into writing. My wife was ecstatic, thinking I would write her the love letters that made her "quiver" each time she read them.

At first she was disappointed with the idea of sharing my writing with the world. Now since F2K, she has read my contributions and shakes her head in amazement at how good they are. (I'm remaining humble. She has been my number one cheerleader for over 20 years.)

I have several short stories in rough draft that I can now rewrite and rewrite till polished and submit for publication. I have one novel on the go with another being developed on the side. Will they remain in my drawer? Nope. With the encouragement of my teenage kids and my wife; the building blocks developed through F2K; and enrolling in WVU, I see myself not writing as a hobbie, but as a career.

Will I have the "breakthrough" novel that will make me millions and land me on the best seller list? Who cares! I've never been one for fame and glory anyways. Just to share my prose with people, and get paid for it, is enough for me.

Also. I know what it's like to go without. I started my family making seven bucks an hour. I've had my phone cut off and nasty letters mailed to me. It's hardships like these that build character and strengthen relationships. I'm sorry that that woman walked out on you when the going got rough. It's obvious she's not the one for you, then. Your a good guy, the right one will come along, eventually.

One more ramble. I'm a history buff as well. Last autumn I did a study on the War of 1812. Living in southern Ontario gives me the opportunity to visit the battle sites and the forts that were involved in the war. The feeling you get is incredible. Standing on the very ground that hundreds of men gave up their lives for to protect MY country gives me a new respect for something that happened with virtually little acknowledgement by todays society.

I wish you great success in your future writing endeavours. Who knows, maybe I will see your name on the national best sellers list.

Till next time,
Mike D.

Just keep on, Mike. Sounds like you are on your way! Great!

Oh, and write more letters to your wife. I know from some experience that once a woman reads your letters, and is moved by them, she wants more. And what nicer way to express your feelings to her than a love letter?

Back after my second wife and I had split up for the second time I was left whith practically nothing. No phone, TV, radio and very little cash. I have never know such peace of mind.

Now I am richly blessed and have everything could desire and much more than I really need. God is good.

Speaking of letter writing, the subject came up at our men's fellowship last night. It was suggested that our children should be the recipient of our letters. As they age and discover that their parents are not as stupid as they had thought the letters will be valued.

mac, that's a heckuva good idea. Imagine all you can tell them. :D

GOD is good, and he keeps teaching me. I wish I wasn't such a slow learner!

Wow benning, I can relate to a lot of what you said and learn alot from the rest. I have learned much from what you have to say, it may be hard to take at first but eventually it sinks in and makes sense. I am glad you had the determination to stick it out, and I know I speak for alot of others when I say thank you for being here.nr

Wow Benning, I stumbled on your blog looking at things about Cosmo's Conundrum (Yes I still love that defunct game). I'm not sure if we played at the same time, but I think we did. *sigh* waxing nostalgic for the good ol' days. Wish they would bring it back. Best of luck with your writing and hope you make it through the hard times.

You seem to be getting quite a bit of traffic out of mentioning Cosmo's Conundrum. I found you in exactly the same way to Meggs in the post above.

That little chimp turned out to be one of the greatest catalysts for change in my life too. Back in 1999 he got me to Boone, NC, for an interesting weekend where I met your good self and the lady you mention.

If I remember rightly, the pair of you were the reason for the whole event. There were a few other Cosmo couples there too, myself included as I was there with Juliet. I'd started out as fanatic but I think I'd become poetry by then and that's how I stayed until the end.

I was a writer too, or thought so. I had visions of writing novels and stories and poems, but rarely seemed to actually write much. What I've discovered since is that my fiction really isn't that good.

My non fiction, however, is getting better and better, and I'm currently over 150,000 words into my own first book, which puts me about halfway. It's a travelogue through the history of cinema.

I have a blog too, at http://dawtrina.blogspot.com. It's a movie review site of sorts, but mostly just for rough reviews. The quality of writing and the depth of insight isn't as high as in my book, but that I'm seeing the difference is an improvement in itself! Pop over and say hi sometime.

All the very best to you. I'll certainly pick up a copy of your book and mention it on my Cosmo gallery whenever I get round to working on it again.

It's eight years since we met and you probably don't remember me, but the very fact that you sparked that meetup means that I remember you. Once I'd got to the States I carried on travelling for three months, meeting up with Cosmonauts all over the US and Canada. I've met Meggs too, though later.

Now I'm Stateside for good, living in Phoenix, AZ with a 100% player who has become my wife of three years. Yes, I have a lot to thank that chimp for.