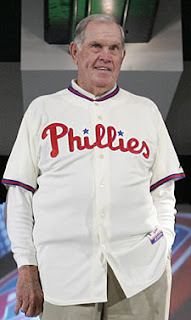 Robin Roberts, the Baseball Hall of Fame pitcher of 'Whiz Kids' fame, has passed away (May 6, 2010). This gentleman, who spent so much of his 'retirement' years teaching baseball to the young, will be missed, as another link to a more innocent sporting past goes to his reward.

I was too young to ever have watched Roberts pitch for the Philadelphia Phillies. The earliest Phillies' baseball era I can remember was in the 60s, when names like Johnny Callison, Jim Bunning, and Chris Short were the Phillies my mind conjures up. Not until the 1970s, with Greg "The Bull" Luzinski, Mike Schmidt, Larry Bowa, and Willie Montenez, did I pay much attention to baseball. But the name of Robin Roberts was, even then, famous and revered in Phillies lore.

He was the consummate team-player. A gifted pitcher whose career was anchored with a team which never made the post-season after Roberts' second season in the Major Leagues. Phillies fans remained fond of Roberts despite his team's season-after-season losing records. In a small way I can relate to this feeling.

In the 70s the Phillies had Steve Carlton pitching, a reclusive man whose talents were phenomenal on the mound. I can recall one season when Carlton's victories comprised something like 49% of the Phillies wins, that year. The players seemed to believe that if Carlton was on the mound they would win. I think Roberts provided a similar feeling to the Phillies teams he was a part of.

The difference between the men was obvious, though. Roberts was unassuming, friendly, generous. Carlton led a monastic-like life, shunning the spotlight, and often, the fans, in his bid for pitching perfection. 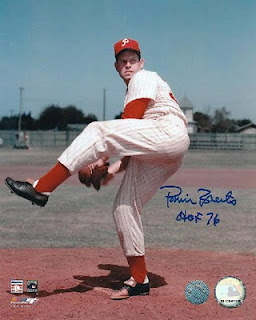 One could scarcely imagine Carlton joshing with a team-mate in an easy manner. But Roberts did. And here's how Larry Thornberry, in his article on the passing of Robin Roberts, A Very Complete Game, describes how Roberts' pastor, Wally Meyer, pastor at Christ Our Redeemer Lutheran Church, remembered his story-telling:

Meyer also liked Roberts' baseball stories, including the one about the rookie Lou Piniella who was sent up to pinch-hit for Roberts (who wasn't a bad hitter for a pitcher). Piniella grounded out to shortstop. Later in the clubhouse the by then venerable Roberts joshed the rookie, saying, "I could have done that." 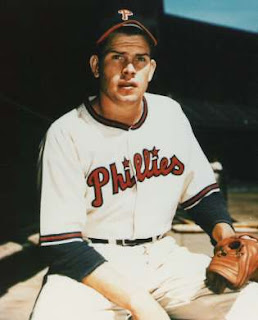 Athletes' careers end, their lives go on, and so many of them become caricatures, while most simply move on to other things, and are nearly forgotten. But some, like Robin Roberts, move on to better things, improving their own lives as well as the lives of others. As Thornberry notes:

Those who knew him will tell you that, taken all around, Robin Roberts was a Hall of Famer as a man as well as a pitcher. His long and productive life was more than a quality start. It was a very complete game. He will be missed.

Note: Robin Roberts' number - 36 - was the first Phillies' number to ever be retired by the Philadelphia Phillies.
Posted by benning at 11:51 AM

"I was too young to ever have watched Roberts pitch for the Philadelphia Phillies."

It does, doesn't it? And the Times they are a-changin'.