So the World Series is over, the ballplayers can come in out of the rain and chilly winds, and we can move on to Football and Ice Hockey.

The Philadelphia Phillies are the Champions of Baseball, once more. They last won the Series in 1980. So the 80 - 08 signs were very nice and poetic. A fairly young team, with a very old manager, the Phillies did everything they had to do to get to the world championship and win it. Reaching the National League Championship the experts made a point of telling us they couldn't win in Los Angeles against the Dodgers because the Phils hadn't won a single game there all season. So the Phillies went to L.A and won two out of three to take the pennant. Coming into the World Series, the Phillies were proclaimed underdogs and ignored the naysayers to win it all. 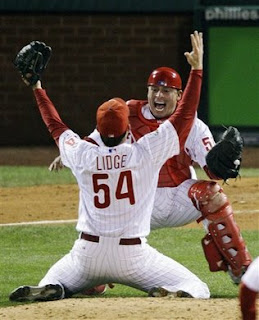 Pedro Feliz drove in the winning run for the Phils in the bottom of the seventh inning. Phillies relievers J.C. Romero and closer Brad Lidge pitched scoreless ball from there.

When Lidge struck out Eric Hinske in the ninth to end it, the Phillies began celebrating their second World Series title in team history, and first since 1980. Lidge successfully closed all 41 save opportunities in the regular season and all seven such tries in the postseason, including two in the World Series.

I grew up in the suburbs to the northeast of Philadelphia. I remember listening to the games on the radio and hearing about Johnny Callison in the field and Jim Bunning on the mound, was confused by the collapse of the '64 Phils under manager Gene Mauch, shook my head at the insane antics of Richie Allen. And suffered through losing season after losing season.

By the time the Phillies had become steady contenders I was living in Southern California - the home of the hated Dodgers! I had to experience the rise of the Phillies at a distance. The 1980 march to the World Series was magical, but scary, too. The Phillies had been cursed with collapses for decades - The Whiz Kids of the 1950s are legendary! - and every game lost seemed to hint at another collapse. The power of Mike Schmidt, the on-field excitement of Pete Rose, the pitching wizardry of Steve Carlton was exciting and wonderful! We had our hopes. And we had our fears. Oh, please, not another collapse. Please?

But the Phils won! And they remained contenders for a few more years culminating in a World Series in 1983. But Eddie Murray of the Baltimore Orioles destroyed the Philadelphia hopes that year with his two, game-five home runs to beat the Phils. Phillies fans turned into a Philadelphia version of Cubs fans: "We'll get 'em next year!"

It took a decade for the Phillies to return to the Series. But 1993 was not to be the second winning World Series for them. Joe Carter of the Toronto Blue Jays hit a 3-run homer in the ninth inning of Game 6 to turn the Phillies into World Series losers. 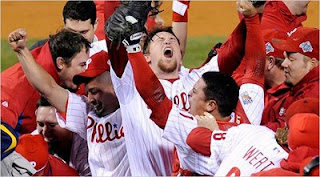 But this year - 2008! - was the year. World Series Champions again! A tough team to love, those damned Phillies. But how can you not?

Beloved Dodgers. I have fond memories of the '77 and '78 Dodgers beating the Phils for the Pennant. Of course that didn't happen this year.

You'll forgive me if my memories of those two years is less than pleasant?

The next year, I believe, it was the Reds dousing the Phillies' hopes. And that was the end of Danny Ozark.

Dallas Green was brought in to light a fire under the Phillies' Prima Donnas, and he did! LOL