On June 14, 1777, in order to establish an official flag for the new nation, the Continental Congress passed the first Flag Act: "Resolved, That the flag of the United States be made of thirteen stripes, alternate red and white; that the union be thirteen stars, white in a blue field, representing a new Constellation."

Until the Executive Order of June 24, 1912, neither the order of the stars nor the proportions of the flag was prescribed. Consequently, flags dating before this period sometimes show unusual arrangements of the stars and odd proportions, these features being left to the discretion of the flag maker. In general, however, straight rows of stars and proportions similar to those later adopted officially were used.

As for me, my favorite configuration remains the circle of stars we consider the Betsy Ross flag.

The Fourth of July was traditionally celebrated as America's birthday, but the idea of an annual day specifically celebrating the Flag is believed to have first originated in 1885. BJ Cigrand, a schoolteacher, arranged for the pupils in the Fredonia, Wisconsin Public School, District 6, to observe June 14 (the 108th anniversary of the official adoption of The Stars and Stripes) as 'Flag Birthday'. In numerous magazines and newspaper articles and public addresses over the following years, Cigrand continued to enthusiastically advocate the observance of June 14 as 'Flag Birthday', or 'Flag Day'.

Adults, too, participated in patriotic programs. Franklin K. Lane, Secretary of the Interior, delivered a 1914 Flag Day address in which he repeated words he said the flag had spoken to him that morning: "I am what you make me; nothing more. I swing before your eyes as a bright gleam of color, a symbol of yourself."

Inspired by these three decades of state and local celebrations, Flag Day - the anniversary of the Flag Resolution of 1777 - was officially established by the Proclamation of President Woodrow Wilson on May 30th, 1916. While Flag Day was celebrated in various communities for years after Wilson's proclamation, it was not until August 3rd, 1949, that President Truman signed an Act of Congress designating June 14th of each year as National Flag Day.

Today we celebrate that piece of cloth that has waved over many a foreign battlefield, and been draped over the remains of far too many brave Americans who gave their lives for their country.

A flag is nothing more than a symbol, a piece of cloth with colors and images, raised for the people to rally around. Our own flag has had many versions over the years, including one of yellow with the snake image made famous by Benjamin Franklin, and the motto "Don't Tread On Me" emblazoned across it. But we have settled into a love-hate affair with the Stars and Stripes. Some of this, perhaps, has to do with the ease we've discovered in using our flag's design for our own ends, or amusements.

More than any other flag in the world, Old Glory is recreated by so many for use in pictures, posters, clothing, and so on. Even broken into its component parts, ours is a flag instantly recognizable nearly everywhere.

Battered by political opportunists, attacked by political fools, our old, tattered flag has continued waving over the decades, available to patriot and scoundrel alike. We Americans actually love our flag. Not simply as a national symbol of a ruling family or elite, not as a religious symbol, but as a symbol of ourselves. Our respect for Old Glory, not to mention some of our lack of respect, stems from our personal pride in that banner. No matter which party sits in the White House, nor which party controls our houses of Congress, that flag is ours. 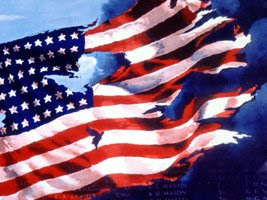 We don't like fellow Americans treating the flag with utter disrespect and are suspicious of those who do. Our national representatives spend too much time trying to think of ways to protect that flag - she needs no such protection; she flies in our hearts as well as above our buildings - and our enemies spend much of their limited resources trying to anger us with their contempt for Old Glory. But though we grit our teeth, we know in our hearts that the flag will still wave; we know that our enemies cannot kill the ideals of Freedom and Liberty by assaulting a piece of cloth. 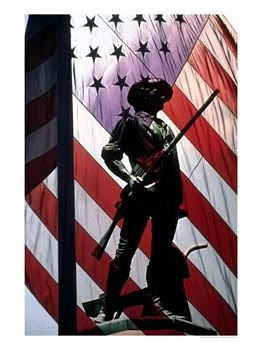 Our national anthem was written during the bombardment of Fort McHenry by the British during the War of 1812. The flag was still there! The British burned the White House during that War and perhaps expected us to be a demoralized people. But we raised the flag there and went on. The Stars and Stripes prevailed over the Stars and Bars during our Civil War, and surged up San Juan Hill during the Spanish-American War. From the sunken tombs of our battleships at Pearl Harbor to the smoking ruins of the World Trade Center, we Americans have raised our flag to show our enemies that we are still here. We are not afraid of them, and soon enough this flag will wave over them.

That flag stands for Justice, too, you see. Not the Justice of those who see failure in everything this nation does, nor the kind of Justice that demands lock-step obedience to any political dogma, or religious sect. No matter what some may say, where Old Glory flies Justice lives, Freedom survives, Liberty is possible. 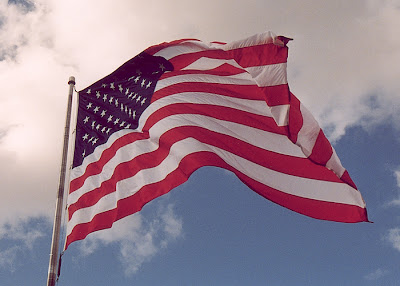 The Battle-Cry of Freedom

CHORUS:
The Union forever, hurrah, boys, hurrah!
Down with the traitor and up with the star;
While we rally round the flag, boys, rally once again,
Shouting the battle-cry of Freedom.

Happy Flag Day to you, and soon we'll be having another fantastic Fourth of July as well!

great reminder hun!...a most patriotic day to u too !

I've got my flag up!

This is a great post, Benning. I like the configuration of the Betsy Ross flag best too.

Our flag was replaced on Memorial Day. A brand new flag for a really important day.

I learned how to sing "Rally 'Round the Flag, Boys!" when I was in school, as well as George M. Cohan's "It's A Grand Old Flag." Do students learn these tunes today?

Since 9/11, we've had a flag flying from our front porch. So far, we've worn out two flags, and the present one is a bit tattered and faded. That battering doesn't matter, really.

Funny thing about post-9/11. For a few months, everyone here was flying a flag. But now we're the only ones!

Make that "You're A Grand Old Flag."

Music and words HERE for "You're A Grand Old Flag."

AOW: You would have DIED; I attended an 'adult high school graduation' for my cousin-in law... At the end, we were asked to rise and sing the first verse of "America the Beautiful."

I swear to you, AOW, 95% of the audience did not know the words. They kind of mumbled through it! The educators looked astonished, and I was BELTING it out.

Oh, and the rest of the five percent of us who DID know it were belting it, too!

We learned "Rally Round The Flag" in grade school, when it was piped into the classrooms in the morning. Learning the patriotic songs of our nation is old-hat, it would seem.

My birthday is on Flag Day, so not only do I have a patriotic attachment to the day, but a sentimental one as well. Hooray!