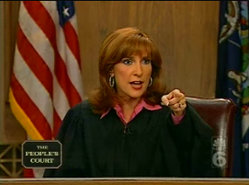 It is quarter to eleven, and I'm waiting for "The People's Court" on the TV. That's one of my guilty television-viewing pleasures. I just love Judge Marilyn Milian! She can bang her gavel on me anytime! LOL

Last week, at this time, I was still sipping coffee, wondering when I would summon up the energy to go do the laundry. In fact I didn't until the next day. Talk about lazy! But this morning I've done the laundry, washed the dishes, gone to Wal-Mart to buy staples (y'know, macaroni, rice, that sort of thing. It's cheaper there than anywhere else.) and return a DVD player that worked for about two days (bought a Magnavox instead. Same price, but it should last longer, don'cha think?), went to the Largo Library to take back some books and pick up some new ones, hit the Albertson's for some meat (pork, chicken, beef), some beer, and veggies, and am home in time for the Judge!

Getting things done, you might say. Little things, but I have that nasty habit of putting things off. I am lazy beyond reckoning.

Normally I have two days off together. Sounds obvious, but not everybody does. And I prefer to get all my errands done on that first day. So I can dive back into my nest and do what I like for the rest of my time off. I hate having to do things in pieces, stretching out over two days - or more! - and get back to work feeling as though I haven't had any time off at all. See? Lazy!

Well, this morning I was up at 6, had my coffee, while doing some blog surfing, and got to the laundry early. No excuses today. I may venture out tomorrow and gas up the station wagon, but otherwise I'll be nesting until Friday morning.

Chicken thighs are slowly baking in the oven right now - and they'll be ready to nibble all week - the beer is getting colder - first brew in three weeks, coming up! - and I have five books to enjoy before me.

I've put away my two novels-in-the-works as they seem to be going nowhere. But I am now noodling away at another. I'm going to research a sequel to "Benning's War" that will take place a decade later. The working title will be "Harry's War", and will have to do with Harry Tyler Benning, one of the orphans that the Bennings took in in the first novel. I've already mumbled through some dialogue - at work, which gets me some odd looks from fellow associates and shoppers - to start getting some flavor to work with. Maybe I can plow through this and then nail the two I've monkeyed with for so long. We'll see.

If you've read "Benning's War" I think you may like to see what young Harry gets up to a decade hence. Anyway, Judge Milian is now starting and I'm gonna make some Chili with hot dogs. Catch y'all later!
Posted by benning at 10:46 AM

Dang we were twins in another life. I hate playing catch up and wouldn't have to if I didn't put things off. LOL
Blessings

Yes, I would like to know what Harry gets up to. Thatw ave pic in your header is great. I guess you got rid of those chilly snow scenes now that you are really getting some cold weather.

I'd certainly like to read another of your stories.

The picture from the North Shore is cool; looks like that this time o' year, it does...

I'm trying to write about the experiences I had in the Coast Guard and in particular Miami Beach. My idea is to incorporate factual events with a fictional storyline.
My best thoughts usually come right before I fall asleep at night and I'm thinking about something else.
Sitting in front of a computer and my mind goes blank.

Take a pad and pencil to bed with you, AC. Sometimes the paper is less intimidating than the monitor.

Camo, Patrick: We'll see how it works out.

Lilfeathers: Heheheee! The Procrastinators League! (We'll work on that later)

Dang! I thought you were going to post something really firy that Judge Milian said. She's one of my favorites too.

Your set up sounds cozy... I can almost smell the chicken from your oven. I guess I need to get off of here and go bake some chicken. :)

The "Harry" idea is a great one.

As for getting everything done at one time I'm with you. It drives my wife crazy, but I even plan the route in my head as a circuit...going along so that every place I need to hit is a right turn clyde.

I have to make myself not be lazy...

Wal-Mart rawks... They have one-pound tubes of turkey meat for about a buck-fifty. That's cheaper and healthier than hamburger.