Thanks to Patrick for this.

You Are a Snapdragon
"Mischief is your middle name, but your first is friend. You are quite the prankster that loves to make other people laugh." 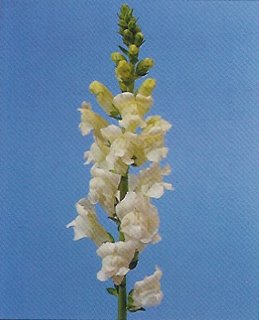 The botanical name for Snapdragon is Antirrhinum Majus. It originated in the Mediterranean region of France and Spain more than 400 years ago. It is now one of the most popular flowers around. The flowers sit in graduated clusters atop a spike that is between 8 and 12 inches in length and along a stem that can grow as long as 45 inches. Snapdragons are available in shades of red, orange, lavender, pink, salmon and white. They have no scent.

Because of their abundance of color and their vertical shape, Snapdragons are extremely useful in vase arrangements. These flowers are readily available in May and June and then again in late summer until the end of October. Snapdragons can also be found in limited supply in late winter and early spring. Properly cared for, they can last about a week.

Note of warning: these flowers require sufficient water at all times. They are also extremely sensitive to ethylene gas and should be kept away from fruits
and vegetables on food table displays. If kept too close, they will drop their buds on the table.

Very pretty flower, isn't it? I tend to lean toward Carnations and Irises as favorites, but these are really nice. Check out the quiz, why don'cha, and see what kind of flower you are. Then check out Patrick's blog - Born Again Redneck - and enjoy the reading there!

I had never known another Patrick Conlon until I moved to San Francisco and I was amazed to find that there were three others with my name in the phone directory.


Along with this banner, was the following, which I found interesting:


So, if 99.83 percent of people with the first name Jeffrey are male, who, exactly, named their daughters Jeffrey? From Behind The Name comes this:
JEFFREY
Gender: Masculine
Usage: English
Pronounced: JEF-ree
Medieval variant of GEOFFREY

Look, this is not a female's name! So figure it out! Jeepers! Almost as silly as A Boy Named Sue! And I wanted to know what the name means, too, so I looked for that and found this:

From an Old French form of a Germanic name. The second element is Germanic frid "peace", but the first element may be either gawia "territory", walah "stranger", gisil "hostage" or god "god" (see GODFREY). It is possible that two or more names merged into a single form. The name was introduced to England by the Normans, where it became common among the nobility. Famous literary bearers include the 12th-century chronicler Geoffrey of Monmouth and the 14th-century poet Geoffrey Chaucer, writer of 'The Canterbury Tales'.

And Godfrey gives me this:

From the Germanic name Godafrid, which meant "peace of god" from Germanic god "god" and frid "peace". Godfrey of Bouillon was the leader of the First Crusade and the first ruler of the Latin Kingdom of Jerusalem.

So I am God's Peace. Get used to it! Heheheee!

By the by: Being curious, I checked for my siblings names. My sister's married name garnered the following, which tickled me!

Only 9 people in the entire US have my name.

Those were two fun quizzes. A snapdragon?

That just means that I can breath fire in a snap! Thus blasting demagoguing Libs out of my way! LOL

We have something in common: I came up a Snapdragon too, and Carnations are my favorite flowers.

As to my name, I don't exist. I swear the darn thing says: " While both names you entered were found in our database, neither was common enough to make it likely that someone in the U.S. has that name."

Funny, there's a guy who posts as Godfrey at another blog I frequent...but since he says he's an atheist, he uses it to mean "God free".

I'll be sure to enlighten him as to the actual meaning...

Angel: Did you check? C'mon, tell us!

Gayle: Supposedly this comes from the Census database. Has your name changed? I checked my sister's maiden name first - which was predictable with lots of her name - then her married name. You may be an anomaly who must be studied by the NIH! Maybe you are a protected minority! Heheheee!

Camo: Go get him! Smack some sense into him! LOL

None have mine, by God! It ain't Ichabald Goesh either.

I don't think this is accurate; if I Google search my own name, I come up with a wedding photographer with the same first and last name, and this claimed I was the only one with my first/last name combo.

Thought you'd want to know the above.

Now, off to explore this posting you've got.

I am a daffodil:

You have a sunny disposition and are normally one of the first to show up for the party. You don't need too much attention from the host once you get there as you are more than capable of making yourself seen and heard.

I'm not sure that the analysis fits, however. I'm not much of a party animal.

Put the two names together and the figure is 121.

Thanks, Benning, for this fun posting. With all that's been going on in my life and on the blogs, these activities you provided were a blessed relief. I need the diversion! :)

Brooke: Perhaps the photographer's name is different on the census.

AOW: Thanks! I hope they're spurred to rush home, hop on the Net, and buy that book! ;)

The responses I've seen have been callas and snapdragons, so you ARE unique!

We do need some light things to occupy us. Otherwise we'll all turn into Edgar Allen Poe!

FWIW, I'm a Canna...whatever that is.

I've never heard of them...

Camo: I know I've heard of Canna Lilies. But I went on a search. Here's the best short description, so far: "Canna (Canna or Canna lily although not a true lily) is a genus of nineteen species of flowering plants, the only genus in the family Cannaceae. The closest living relations to cannas are the other plant families of the order Zingiberales, that is the gingers, bananas, marantas, heliconiaa, strelitzias, etc."