Did You Forget? I Did. 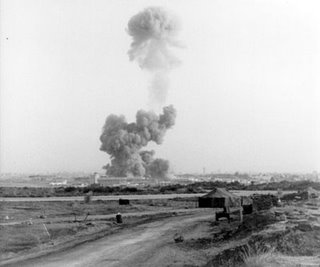 I visited a new blog today - I'm fighting bronchitis and called off at work - after seeing a comment at another blog. The second post on the page made me feel uneasy. I forgot. Completely. Perish The Thought had a memorial to the Marine Barracks bombing in Lebanon. Remember? All the way back in 1983? October 23rd, 1983 to be exact.

The Muslim Homicidal Bomber ran his truck into the lobby of the building and detonated the equivalent of 12,000 pounds of TNT. The building collapsed. And quickly, so did American resolve. 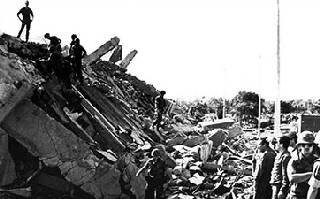 Noted at Perish The Thought was this sad summary:

The death toll was 241 American servicemen: 220 Marines, 18 Navy personnel and 3 Army soldiers. Sixty Americans were injured. In the attack on the French barracks, 58 paratroopers were killed and 15 injured. In addition, the elderly Lebanese custodian of the Marines' building was killed in the first blast. [1] The wife and four children of a Lebanese janitor at the French building also were killed.[2]

The result of that attack on Americans in Lebanon, by Islamic Terrorists, was American retreat from the Middle East. The U.S.Congress pressured the President, Ronald Reagan, to pull all American troops from Lebanon. And the Islamic Terrorists noted that retreat, and they arrived at the conclusion that the USA was a Paper Tiger.

Please visit Perish The Thought and read the post. I forgot, I'd bet you did, too. And we shouldn't. Not only because this was one of many Islamic attacks on Americans - not the first, either! - but because the dead were serving their country in a hostile place. Their service and sacrifice should not be minimized because it wasn't as spectacular and public as the 9/11 attacks. They were there on our behalf. They were killed or wounded serving us. We dare not forget so quickly. 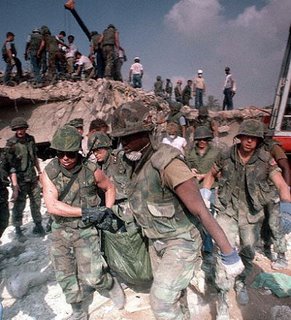 I apologize for having forgotten.

iiThe Left with its essential agnosticism and atheism is unable to comprehend that islamic fundamentalists simply want us dead for religious reasons. Political and economic considerations are secondary to the primal driving force of jihad. Suiciders have been around a long, long time, well before the Kamikazes of Japan even. This is nothing new or unique to islam. How simple, pure and pristine - allah wants and needs you dead, and your children and way of life. Alas, the complexity of modern life and its entwined nature makes their task disproportionately less complex. Recall the simplicity of boxcutters being used to kill 3,000 of and inflict financial loss. Despite the immense wealth afforded the Arab/muslim world these past 60 years, they have contributed nothing, absolutely nothing in the endeavors of medicine, law, economics, architecture, music, literature, political science, etc. While the Israelis for example were putting a man into outer space, the muslim neighbors were engaging in honor killings. Fundamentalist islam can exist in a vacum, but it must create that vacum through the extinction of opposing forces and ideologies. It cannot function and exist without the death of its counterpart. A part of me is starting to believe that we in the West are inacapable of dealing with the threat of islamofacism. Part of me thinks the visceral necessity of this is too oppressed and repressed with logic and reason and civilized living. Am I wrong?

GOD! I hope you're wrong! I don't know what it will take for people in the West to get their heads out of their anuses - and 9/11 should have done that - but it may be something more horrible than 9/11 to do the trick.

At that point we may see the promised "backlash" the media has been claiming we've engaged in since 9/11. And it will make things very ugly in the USA.

But what's the alternative? Surrender is not an option.

The left will finally start supporting America once a jihadist sets off one of Achmenijihad's nukes or even a dirty bomb in America. I give it 6 years.

Excellent, indeed! I didn't hear one single peep about it today on TV... We musn't paint those Muslims as violent, after all.

You'd lose that bet, in my case; I was still attached to the military at the time. As well-informed as you generally are though, I'm surprised to learn that you had forgotten...

Well, I'm certain it wasn't malicious of you...and it was over 20 years ago.

BTW, I just started reading your book. So far, it's pretty good...

Hope you like all of it! No, not malicious. But 23 years ago isn't that long. Maybe the terrorism has grown so, that I am more aware of the recent things and have shoved earlier incidents back in the closet. In any event I hope to remember better in the future.

Too many evil happenings to let them just drift away unremarked.