By now you’ve probably heard that California Chrome has won the Preakness Stakes. Having won the Kentucky Derby this means that the horse is now a possible Triple Crown winner, should he take the Belmont Stakes on June 7. The last horse to win this elusive prize was Affirmed, in 1978, the eleventh horse to ever do so. 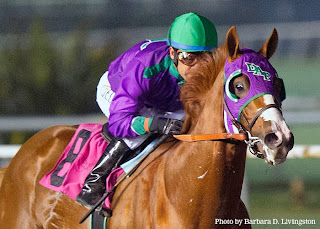 Right now, as I look at my calendar, I have no work scheduled that day, so I’ll be able to watch the race! For the most part the only horse races I follow are those Triple Crown races: the Kentucky Derby, the Preakness Stakes, and the Belmont Stakes. I missed the Derby this year. Yep, I had to work! ;)

Though horse races can be exciting, they can also be frightening, if not heart-breaking to watch. And I don’t mean because of the betting, or the winning/losing of the races. For me, the placing of a bet makes the event less enjoyable. For me. I end up worrying about the money rather than enjoying the race itself. No, it’s seeing these thoroughbreds doing exactly what they were bred to do that is awe-inspiring.

But that very breeding, which can produce such beautiful, swift animals, can also produce dangerous flaws in the physical bodies of the animal.

The horse, designed by God to run, is beautiful, fast, awesome. As Man has tinkered with them, they have grown a bit larger, much faster, but infinitely more delicate than the original design. To see a thoroughbred break down in a race is heart-breaking. For the horse it’s the running that comes naturally to them. They have no idea that their very bodies may be flawed, fragile, awaiting just the right circumstance to betray them.
And yet, that breeding can also produce an animal such as Secretariat! Big Red, as he was called, was a big horse! As I noted in an old post - http://benningswritingpad.blogspot.com/2008/05/134th-kentucky-derby-where-legends.html - size alone is not enough. And Secretariat may have been the very apex of horse-breeding. There seemed to be nothing delicate or fragile about him. In the Kentucky Derby he was actually accelerating as he crossed the finish line! Speed, plus amazing power. He set records in each of the Triple Crown races. Winning the Belmont by 31 lengths is simply unimaginable! Power! Speed! Size! That size alone would enable Secretariat to outrun the ‘average’ thoroughbred, just as a tall human runner would have the advantage in a race with shorter opponents.

But, of course, there are those thoroughbreds which are quite fragile; where the breeding has created an animal that is beyond the limits of its design. When that happens the results can be devastating, and sad. Eight Belles collapsing, with two broken legs, had managed to come in second. Great heart! But she died on the track. A beautiful, but flawed horse.

Barbaro, who won the 2006 Kentucky Derby, and was a fan favorite, shattered a leg in the start of the Preakness Stakes, just two weeks later. As Wiki says: “Barbaro broke his right hind leg in more than 20 places:[4] a broken cannon bone above the pastern, a broken sesamoid bone behind the fetlock and a broken long pastern bone below the fetlock. The fetlock joint was dislocated, and his foot was left dangling loosely. Veteran jockey Edgar Prado immediately pulled Barbaro up, and brought him to a gentle stop. He dismounted and leaned his shoulder into the horse's shoulder to support Barbaro until track attendants could arrive.” I watched that race, and saw the replays of this. The poor jockey. Struggling to help his mount! The owner would perform heroic measures to save Barbaro, but ultimately he could not be saved, as his body failed, bit by bit, over the next few months, unable to survive the succeeding problems.

What will be the fate of California Chrome? His breeding, or pedigree, is a decent one, it seems. Inbreeding would seem to be less than that of other thoroughbreds. So he may have the strength of body that more inbred horses lack. I hope so! He is a fun horse to watch, though not as magical as Secretariat. Will he win the Belmont Stakes? Will he become the first Triple Crown winner since 1978?

Only time will tell. It would be a heckuva win for the owners, and for the fans of horse racing. It had been 25 years without a Triple Crown winner, when Secretariat won. Only five had passed when Affirmed won it. And now it’s been 36 years since Affirmed.

I can recall some smartie-pants whining in ‘73 that the thing was just too hard! Maybe the timing of the races should be changed, the rules changed. Hah! Typical. And you can hear the same stupid thing now, and have since Affirmed. Seems if something is difficult, there are always those who want to change the rules. And, yeah, that’s a perfect way to improve things, isn’t it? Yeesh!

If California Chrome is fast enough, strong enough, and better than his competition, he’ll win the thing. If not, he won’t. That’s how it works, in racing, as well as in life. In any event, I expect that horse will do his very best. And isn’t that all we can do?

PS: I found this bit fascinating, from Wiki: “At the time of Secretariat's death, the veterinarian who performed the necropsy, Dr. Thomas Swerczek, head pathologist at the University of Kentucky, did not weigh Secretariat's heart, but stated, "We just stood there in stunned silence. We couldn’t believe it. The heart was perfect. There were no problems with it. It was just this huge engine." Later, Swerczek also performed a necropsy on Sham, who died in 1993. Swerczek did weigh Sham's heart, and it was 18 pounds (8.2 kg). Based on Sham's measurement, and having necropsied both horses, he estimated Secretariat's heart probably weighed 22 pounds (10.0 kg), or about two-and-three-quarters times as large as that of the average horse.”