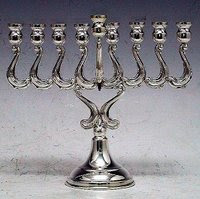 At the death of Alexander the Great, his Empire was divided
between three of his Generals. Israel, during this Second
Temple Period, found itself under the rule of the Seleucid
Dynasty of Greek rulers, based in Syria. At the beginning
of the Seleucid reign, the Jewish people were rarely treated
harshly, although they were, in fact, a subject people.

But they were allowed to worship God in their own way.

Over the years quite a few Jews embraced the Hellenist
lifestyle, and saw little loss in the extinction of
the Judaic way of life.

Antiochus IV came to the throne and embarked on a campaign
of assimilation. Jews would live as the Greeks did,
worship as the Greeks did, or they would die. The Temple
was looted of it's treasures, and desecrated
( even a statue of Zeus was apparently placed on the holy altar).
Jewish religious observances were forbidden.
Antiochus proclaimed himself a god: Antiochus Epiphanies.
He ordered altars and statues honoring the Gods and
Goddesses placed in all the cities and towns,
and had the Jewish people rounded up.
They were ordered to worship the Pagan Gods,
and perform acts considered immoral by Jews.

Indignities were heaped upon the Jewish people.

A Hellenist Jew "High Priest", Jason, gaining his
post through bribery, was outfoxed
by another Hellenist Jew "High Priest" of the
Temple, Menelaus, who outbribed him for the exalted post.
Angered, Jason raised a large army
and began a Civil War against Menelaus and his supporters,
attacking the Temple killing many innocent people.
This was the perfect excuse for Antiochus to move.
He poured his troops into the Country, looting the Temple
once again, and slaughtering thousands of Jews.
Little did Antiochus realize . . .

A fuse had been lit under the Jewish people. It would take
the right person to begin the fight against Antiochus.
A priest in a small town would be the one!

A little east of the City of Jerusalem was a small town
called Modin. Mattityahu, the patriarch of the Hasmonean Clan - a
Priestly Clan - decided to make a stand. He and his 5 sons attacked
the Greek soldiers there, and slew them.

Then the family destroyed the idols they'd been ordered to worship.

With a circle of brave followers, Mattityahu took to the hills - a
time honored tradition of embattled Jews in the Holy Land - and
began gathering forces around him.
The time had come to destroy the Pagan over-rulers.

Now Mattityahu turned over the small army to his son Yehuda Maccabee,
and the army grew. Legend says they took the motto:
"Who is like You among the mighty ones, O God!"
and wrote it on their shields. Using the darkness of night,
the Maccabean forces would storm out of the Judean hills onto
unsuspecting Syrian troops, and having slain and
scattered the enemy, retire to their strongholds again.
A force of 47,000 syrians were defeated by a Jewish force of
6,000 in one encounter alone!

Antiochus, enraged at this, sent a larger force still to destroy the rebel Jews.
The two forces met at Bet Tzur.
In a miraculous battle, the badly outnumbered Jewish rebels
defeated the huge Syrian Army. Victorious, Yehuda Maccabee led his forces
to Jerusalem, and liberated the City.
The first order of business was to clear the Temple, and especially the
Sanctuary, of the idols of the Greeks, and rebuild the Altar.
Then they would be able to re-dedicate the Temple for Divine Services.

Among the legends concerning Hannukah, is one regarding
the Holy Fire. It seems that from the time of Moses,
Holy Fire burned on the Altar. Even during the Exile in
Babylon, the Holy Fire is said to have been kept
miraculously burning, hidden in a secret place.
But when Judah Maccabee and his men had placed wood on the
rebuilt altar, and readied an animal for
the sacrifice, the Holy Fire was gone.
It was unlawful to kindle the flames
with what was called "strange fire".
So Judah and his men prayed to God.
Miraculously, Holy Fire came forth from the altar!
The altar was dedicated on the 25th of the Jewish month
of Kislev. And so Jews today celebrate the 25th of Kislev
as the first night of Hannukah.

Within the Temple stood a seven-branched candelabrum,
known to Jews as the Menorah. It burned day and night fueled
by olive oil of the highest purity.
The purity was guarded throughout the entire process of
production, and was kept in special containers that bore the
seal of the High Priest.
But when the Maccabees entered the Temple, everything had
been desecrated and defiled it seemed. Except for one, small flagon of pure oil.
In it there was enough oil to keep the Menorah
lit for a single day. Perhaps some pure oil could be found
in the City, but a search turned up not a drop.
It would take a week to make more of the pure oil.
What to do?
Depend on God, of course.
The Menorah was lit, and the priests began to work on
making more of the pure oil.
At the end of that first day, the Menorah in the Temple
didn't flicker and go out.
It burned as if it had all the pure olive oil in the world.
By the time the new oil was ready, eight days had passed!
And still the Temple Menorah continued to burn!
A Miracle!

The following year a feast of Praise
and Thanksgiving was proclaimed.
It would last for the eight days of the Miracle.
And more than 2000 years later, Jews around the
world light menorahs,
praise God, and remember.

From one Gentile, to my Jewish friends everywhere, 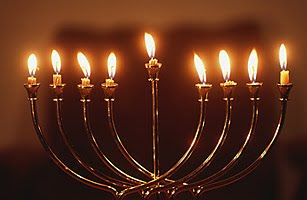 Any historical errors are mine alone.

His hand is powerful!

I knew about the Holy Oil but didn't know all the other history. Most enjoyable.

Thanks, Patrick! I trust you're feeling better. :)

awesome piece Benning!!! HAPPY HANUKKAH TO ALL WHO CELEBRATE!! hugs!

The theme of energy conservation is timeless, too... ;-)