Another V.P. Choice For McCain: J.C.Watts

"...they [ Jesse Jackson, et al.] said that I had sold out and Uncle Tom. And I said well, they deserve to have that view. But I have my thoughts. And I think they're race-hustling poverty pimps." J.C.Watts, on declining to join the Congressional Black Caucus. Hannity & Colmes (1997) 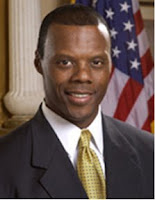 In 2002, the last Black Republican in the US House of Representatives retired, saying he wanted to spend more time with his family. He had been elected to the House four times from Oklahoma's 4th Congressional District. Originally saying he would serve only two terms, Watts ran for re-election and won his third and fourth terms. He served the people of Oklahoma in the US Congress from 1995 to 2002.

The Republican Party thought so highly of him that he was then selected to head GOPAC, the Republican Party's action committee, founded by Delaware Governor Pierre S. du Pont in 1978 in "an effort to build a farm team of Republican officeholders who could then run for congress or higher state offices later". Watts headed GOPAC until he was succeeded in February, 2007 by Maryland's former Lt. Governor Michael S. Steele. His return to the private sector, while a boon to him and his family, was a big loss to the Republican Party. So who is J.C.Watts? And why am I blogging about him?

A native of Eufala, Oklahoma, Julius Caesar Watts (he tells people the J.C. stands for nothing, but that he would say it was for 'Julius Caesar' as a joke. The Congressional Biographical Directory lists Watts' official name as "Julius Caesar Watts, Jr.".) was reared in the Baptist Church, graduated from High School in 1976, and was recruited by the University of Oklahoma for the football team. From Wiki:

Chosen to play the quarterback position, Watts led the OU Sooners college football team to consecutive Big Eight Conference titles and Orange Bowl championships under the leadership of head coach Barry Switzer. Twice, in 1980 and 1981, Watts quarterbacked the Sooners to Orange Bowl victories over the Florida State Seminoles and knocked the Seminoles out of contention for the national championship. He earned MVP honors in both games. He graduated in 1981 with a BA degree in journalism.

Between 1981 to 1986, Watts played professional football in the Canadian Football League for the Ottawa Rough Riders, receiving the Grey Cup Most Valuable Player award during his rookie season in a Grey Cup loss to Warren Moon and the Edmonton Eskimos. Watts continued to play the quarterback position (which had brought him success at OU). By the end of his football career, Watts had played against such quarterbacks as Damon Allen, Warren Moon, Matt Dunigan, Tom Clements, Condredge Holloway, Dieter Brock, Joe Paopao, Danny Barrett, and Vince Ferragamo during his sojourn in the CFL.

J.C was a football star. Probably not quite good enough to make it to the NFL (He was a running quarterback at a time the NFL wasn't much interested in running quarterbacks), Watts nevertheless was a professional athlete of some renown. When he retired from football he returned to Oklahoma and became a youth pastor for the Baptist Church in Del, Oklahoma. He served in this position from 1987 until 1994. During this time he was approached by some prominent Oklahoma Republicans who asked him to consider running for the Oklahoma Corporation Commission. Watts defeated his Republican Primary opponents and took the election in November, 1990. J.C.Watts became the first Black elected to state-wide office in Oklahoma history. Then, Wiki notes:

Four years later, Watts was again approached by prominent Oklahoma Republican leaders and asked to consider running for an open seat for Congress (Oklahoma's 4th Congressional district, being vacated by Congressman Dave McCurdy. Watts agreed and in November, 1994, was elected to the U.S. House of Representatives. He was the first black member of Congress not to join the Congressional Black Caucus. [emphasis mine!]

Watts served in the US House, as I noted above, for four terms, retired to private life and began the J.C.Watts Companies, of which he is the chairman. A consulting firm for business, the company's Mission Statement says:

"Create a world-class business bringing diverse people together in profitable, sustainable relationships across multiple industries.
Offer turn-key solutions for the emerging marketplace at the nexus of business and government, economics and culture. Utilize government and corporate strategies, business ownership, partnerships and alliances.
Provide unparalleled market value to our customers, clients and business partners. Unleash the power of teamwork to accomplish exceptional results."

I especially like that last sentence: "Unleash the power of teamwork to accomplish exceptional results." Something the Republican Party needs to do. As do the American people.

So why am I touting this Oklahoma Republican at all? What's the point? Until he retired from pulbic office, J.C.Watts was one of the rising stars of the Party. He was someone to be reckoned with and part of the Party's future. A powerful voice for Conservativism with the fearlessness to speak out that he probably honed on the football field. He never had a problem with describing his belittlers in a scathing, and dead-on, way.

Time Magazine question: YOU HAVE SAID SOME BLACK LEADERS ARE "RACE-HUSTLING POVERTY PIMPS" FOR KEEPING AFRICAN AMERICANS DEPENDENT ON GOVERNMENT.

Watts: They've turned race and poverty into an industry. They say Republican policies have hurt poor people. Point to them. Look at the major cities where you have black leadership. You have black mayors, black city officials. But you often have the highest crime rate, the highest unemployment. Maybe it's time we look at different [policies] for dealing with old problems.

Time: SO HAS THE DEMOCRATIC PARTY SOLD BLACKS A BILL OF GOODS?

On legalism in Politics:

Legalists think their burden should be your obligation. For the legalists, you can never be black enough, conservative enough, liberal enough. If you don't hew totally to their line, your purity is questioned. You are to say and do exactly as they want you to say and do. Do what the group does and think what the group thinks. Don't be an individual with your own convictions.

or to simply tell it like it is to a national audience.

"You see character does count. For too long we have gotten by in a society that says the only thing right is to get by and the only thing wrong is to get caught. Character is doing what's right when nobody is looking."

Nor was he afraid to tell the Republican Party it was diddling when it should have been fighting harder.

"Republicans want to say we reach out. But what we do instead is 60 days before an election, we'll spend some money on black radio and TV or buy an ad in Ebony and Jet, and that's our outreach. People read through that."

From "On The Issues"

Watts is a perfect example of what Americans can do with their own GOD-given talents, hard work, and determination. He's risen above his own youthful stupidity and indiscretions, gotten involved, become a success. Watts has been a professional athlete, a Youth Minister, a state-wide elected official, a US Representative, and a successful businessman. At no point has he curbed his tongue to "get along" with the "powers-that-be", shrunk from taking on the Leftist Democrats and their Socialist schemes, or hesitated from calling out his racial brethren when they've surrendered to the "race pimps" rather than fight for a life of excellence and accomplishment. At the end J.C.Watts is a proven winner - in athletics, in politics, in business. And his wife, Frankie, and four children would probably agree. He's a fine man with a lot of potential ahead of him, still.

So perhaps he's another choice that John McCain can look at for a Vice Presidential Running Mate. I would definitely get behind J.C.Watts on the Republican ticket. Patrick, at Born Again Redneck, posted that Watts told Sean Hannity that he is not interested in the VP nomination. I wonder what he'll say if the McCain people come calling. So I'm not ruling him out at all. 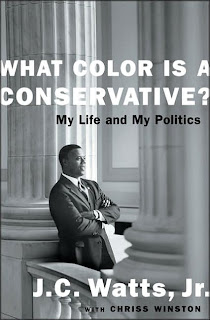 "What Color Is A Conservative?"

I am anxiously awaiting McCain's choice.

For the second time yesterday I heard Watts defending Obama on Hannity: "I don't agree with his policies but he's nice good man etc." Makes me wonder if skin color trumps all for some folks.

Brooke: I think we're all wondering who he'll choose. And how many will say no. Could be a toug choice. Whoever agrees to run with him will be a target unlike any since Dan Quayle. And it won't be easy to take.

Patrick: It does for some people. I hope Watts will take a closer look at Obama very soon. Obama is a machine pol, as much as any who have emerged from Chicago politics in the last century-and-a-half.